The new SilverStone Grandia GD07 and GD08 deliver all the trappings of a typical ATX tower in a media PC case.

Size is a major design factor for a media center style PC case. These cases
are horizontal so that they don’t look out of place with other home theater
gear like DVD/Blu-ray players and receivers in a rack or a cabinet. A small
footprint is usually high on the priority list. The people at SilverStone behind
the latest iterations of the Grandia series don’t seem to be concerned about
this. The GD07 and GD08 are the largest Grandias yet, but they’re not big for
big sake; every inch is used efficiently, with most of the added dimensions
devoted to storage.

The GD07/GD08 are among the larger HTPC cases, at 7 inches tall and 17 inches
deep. The two models are very similar, sharing the same build but with a few
key differences. The GD08 is equipped with a typical SilverStone aluminum facia
while the GD07 has a thicker plastic bezel with an aluminum door. Both support
plenty of drives but the GD07 favors 5.25 inch drives with an extra two external
bays, sacrificing three internal 3.5 inch mounts in exchange. Fan support is
also very good with four 120 mm placements, three of which are located on the
bottom panel.

Of the two, we’d say the GD07’s minimalist front is more attractive, but if
you want to use the front ports, drive bays, or reset button, the entire door
has to be pulled down, not just a discrete flap. The GD08 offers more convenient
access but the color of the stealthed drive covers is slightly off and the eject
buttons protrude a bit more than we’d like. In this review, we’ll focus mostly
on the GD08, as its feature-set makes more sense to us.

Both cases ship with 5.25 inch to 3.5 inch drive brackets, a USB 3.0 to USB 2.0 internal cable adapter, a bag of screws and standoffs and a plain paper manual. The only difference is a set of keys is included with the GD07 to secure the door.

The interior of the Grandia GD08 is somewhat cramped as the drive cage runs
right up against the motherboard tray. Thankfully the drive cage is removable.

Assembling a system inside the GD08 is straightforward as the layout is similar
to that of your run-of-the-mill ATX tower. The main differences are the entire
drive cage pulls out, and you can’t tuck cables behind the motherboard tray.

The Grandia GD08 ships with three identical 120 mm, 1200 RPM 3-pin fans, two at the bottom and one at the side near the CPU area. The fans seem to belong to SilverStone’s FN series, plain black models with nine blades and curved struts.

The two bottom fans were noticeably louder than the side fan, producing an extra 4~5 dB at full speed. The difference isn’t great enough to justify running them at difference speeds however; Their noise profiles became more similar as the speed lowers. Combined, the set generated a fairly loud 34 dBA@1m at 12V but they undervolted well, with the noise level dropping to just 14~15 dBA@1m at 5V. 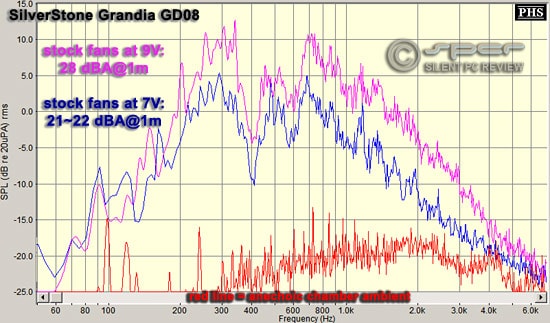 The quality of the fans’ noise was more than acceptable. At one meter distance,
there was an audible humming at full speed but at 9V and below, the fans became
increasingly smooth sounding. They did have some minor tonal elements but it
was only perceptible close-up with the top cover of the case removed. The overall
sound is better than average, regardless of the speed.

Our test system, consisting of a Core i5-750 quad core CPU and a Radeon HD 6850 GPU, was inconspicuously quiet in its idle state, measuring 19 dBA@1m with the CPU fan at 9V and case fans at 5V. Pressing our hand directly over the hard drive area, we could feel some minor vibrations but this didn’t seem to be passed onto the rest of the case — at one meter there was no audible hard drive related noise. Internal temperatures were all very good as well.

Next we put the CPU under synthetic load, producing a slight increase in noise level, probably due to the power supply fan spinning up in reaction to higher temperatures inside the unit. The Noctua NH-C12P is a fine heatsink but the CPU got too hot for our liking, shooting up to 75°C. The extra heat spread out through the rest of the case, driving up the hard drive and GPU temperatures by a moderate amount.

Adding a GPU load to the system placed a considerable additional strain on the machine. A GPU fan speed of 2100 RPM was necessary to keep the GPU at 90°C and the CPU flirted with the 80°C mark. While it got quite toasty inside, the noise level was impressive, only 2~3 dB higher than at idle. Pumping up the system fan speeds to 7V helped tremendously, cooling down the CPU by 9°C and allowing the GPU fan to slow by 400 RPM without any appreciable difference in cooling. At the cost of an extra 1~2 dB, it was a worthwhile move. 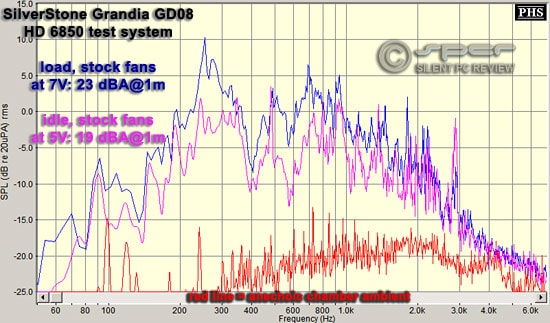 The performance of the GD08 was so strong, it stacked up admirably against
the Fractal
Define Mini, the best microATX tower we’ve tested, an impressive feat
for a desktop style case, which usually don’t have as good thermal performance.
Compared to the
Fractal Design Node 605 we reviewed recently, there’s simply no contest
— the GD08 absolutely crushed it. The smaller Node 605 had great difficulty
keeping our test system stable, requiring both of its fans to run at maximum
speed and the video card fan to spin almost twice as fast. Even then the CPU
temperature was 18°C higher and the noise level was through the roof.

Both cases use a positive pressure airflow scheme but the GD08 is considerably larger and has more fans positioned closer to the CPU area. The Grandia also has less restrictive dust filters and a ventilation port on the top of the case which is noticeably absent from the Node 605.

Though it shares the similar conservative look of previous Grandias, the GD08
is unapologetically large, attempting to offer everything you would expect from
a full tower case in a desktop style chassis. Heck, if you stood the case on
its side, the internal layout would be almost indistinguishable from that of
a standard tower. It may be too big for some, but added size has its advantages,
namely better cooling, and support for up to eight 3.5 inch drives.

In a battle of desktop cases, the GD08 humiliated the more compact Fractal
Node 605 in both thermal and acoustic performance. Against traditional
towers, it traded blows with the Fractal
Define Mini, despite giving up 8 liters in size and having to use a
less proficient CPU heatsink due to height limitations. The drive cage is cleverly
designed to accommodate a mix of 5.25, 3.5, and 2.5 inch drives, while also
allowing the option of long graphics cards. The cage is also removable and padding
at various points keeps the cage and top cover from vibrating against each other.
The fans are fairly smooth sounding and efficient, though at this price-point,
we were expecting some kind of fan control option. Still, given the ubiquity
of motherboard-embedded fan control systems these days, this is not much of
a minus.

The GD07 should perform the same, as the chassis is almost identical. The GD07
exchanges the 3 x 3.5 inch drive section on the right side for an extra pair
of side-mounted 5.25 inch external bays, and adds a full-facia aluminum door.
Frankly, we don’t understand why anyone would need four optial drive bays at
a time when such discs are increasingly going the way of the dodo bird. You
could use it for docking bays to plug and play bare hard drives but we don’t
see this as a common usage case in a media PC. The front is also quite unattractive
when the door is open.

The SilverStone Grandia GD07 and GD08 retail for approximately US$140
and US$150 respectively, putting them in the upper echelon of the HTPC
case market. Their best in class in performance can be used to justify the high
pricing, but the size of the cases will undoubtedly put some users off. Media
hoarders and archivists certainly will welcome all that storage potential.

Our thanks to SilverStone for the Grandia GD07 & GD08 case samples.