Like their predecessors, the latest iterations of SilverStone’s Grandia line offer all the capabilities of a proper desktop computer in a horizontal HTPC style case.

The basic design of the traditional HTPC case comes from a time in the past when people needed a fair degree of computing power to make a media PC in the living room an enjoyable experience. It had to be tall enough to accommodate an optical drive to play DVDs/Blu-rays and multiple hard drives to access/store downloaded/ripped/recorded content. Those who recorded/encoded content on the fly needed a decent CPU and cooling, and a discrete video card for playback was a necessity given the poor state of integrated graphics back then.

Today, the situation has improved so much that media is often streamed over online services and served up on the TV through devices as small as the thumb-sized Chromecast. Pint-sized devices are the rage as well with some being dedicated media extenders like the Roku, while others run Android for some extra versatility. There are even fully functional Windows PCs with a reasonable level of horsepower that can fit in the palm of your hand and use less than 30W. Local content is still big but drive density is so high that most users don’t need more than one hard drive, and it’s often accessed over a local network from a dedicated home server.

Desktop style cases for the living room are still around but they’re not as popular as they once were. They’ve also been getting smaller and slimmer, taking advantage of improvements in PC technology over the last decade. SilverStone has embraced this trend with the Milo series but the aptly named Grandia line has retained much of its size over the years. The latest updates to the family, the GD09 and GD10, are somewhat smaller than the GD07/08, but they’re still fairly large, capable of housing a full-sized ATX motherboard and power supply, a 12.2 inch long graphics card, three 120 mm fans, one standard 5.25 inch optical drive, and two 3.5 inch hard drives. With everything in this category seeing substantial downsizing, these cases need to be compelling to justify the bulk.

As with the last two releases of the Grandia series, there are two nearly identical models available. The GD09 is the plainer of the two, featuring a solid plastic front panel with an exposed 5.25 inch bay, USB and audio ports, and power/reset buttons. The GD10 hides all these behind a lockable brush aluminum door that doesn’t take up the entire face. The border between metal and plastic is somewhat jarring and the white lock/unlock indicators are an eyesore, making the plastic model more attractive in my opinion. Both enclosures have a positive pressure airflow system with all the included fans blowing inward; the GD09 has two 120 mm fans included while the GD10 sports three.

The GD10 will be the focus of this review as it is the more capable of the two models, having one extra fan. The two cases are otherwise identical on the inside though, so almost all of my comments will apply to the GD09 as well.

The accessories are packed into a plastic bag tied to the interior of the case. Included are a few zip-ties, a metal bracket for one of the hard drive positions, four rubber isolators for one of the 2.5 inch drive placements, a bag of screws, and an assembly guide. Only the GD10 ships with a key as it’s required to secure its front door.

The GD10 has a typical layout for an HTPC style enclosure. A removable 5.25/3.5/2.5 inch drive bay hangs over the front/right side of the case, over a portion of the motherboard. The side fans blow air in, directing all the exhaust through the vent on the top cover and out the back via 80 mm fan mounts and ventilated expansion slots.

Assembly is not particularly difficult as the components of the chassis that get in the way during the process, the drive cage and support bar, are both removable. Users need to be picky about choosing a CPU cooler as down-blowing models have height-restrictions well below the specified limit if the drive cage is left in place. Much of the cabling is on the left side of the case and care needs to be taken to ensure they do not impede airflow from the intake fan.

For our baseline noise tests, the system is left idle, the CPU fan is set to minimum speed under PWM control, and the GPU fans are off by default. The system fans are connected to controllable fan headers at a variety of speeds using SpeedFan. This gives us a good idea of what the stock fans sound like at different speeds with minimal interference from other sources.

The three fans included with the GD10 exhibit very little variance with a speed difference of 60 RPM. All three exceed 1000 RPM at full speed, well over their 900 RPM rating. This gives them a bit more versatility for users who want greater cooling and don’t mind the extra noise. On the other end of the spectrum, they don’t really contribute to the measurable noise output until 50% speed, staying quiet up to around 60%. 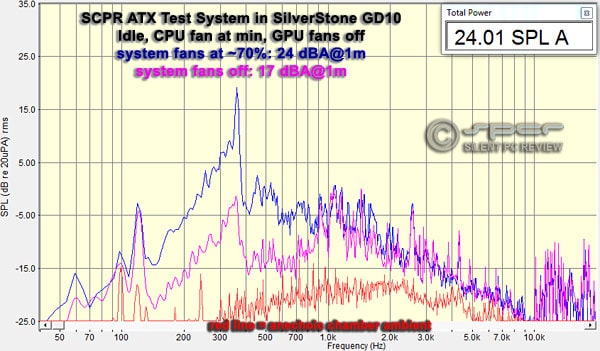 The stock fans have a pleasant acoustic profile, smooth and inconspicuous up to 60% speed. Somewhere in the 65% and 70% range, it starts to emit a strange strong 350~400 Hz tone that is fairly noticeable and annoying within one meter’s distance. At higher speeds, this tone is less pronounced, lower in pitch, and drowned out somewhat by the sound of turbulence, but still present. The front mounted hard drive is secured tightly, limiting the effects of drive vibration, though if the system fans are slow enough or turned off, you can hear a faint echo.

For our system configuration, the stock fans running at 90% (980 RPM) produces the quietest result, 30 dBA@1m with the GPU fans at 55% speed and CPU fan at 80%. The 60% setting isn’t even stable as some CPU throttling occurs (as evidenced by the much lower system power draw) even with the CPU fan going at full blast. At both 60% and 80%, the GPU has to spin at 60% in order to achieve our GPU temperature standard resulting in higher noise levels. The 100% setting allows us to lower the CPU and GPU fan speeds by moderate amounts but the overall result is much louder as the case fans drown out everything out.

The results are suspiciously poor considering it’s equipped with three fans. The main issue is the construction of the dust filters. There’s a fine layer of mesh that is fairly open but the plastic grill laid over it is quite thick and restrictive. Removing the filters leads to far superior performance.

The results of the 90% system fan setting without the filters shows remarkable improvement. The CPU and motherboard temperatures lower by double digits, while both the SSHD and GPU receive a 7°C benefit. All the fan speeds can be lowered such that the machine produces 3 dB less noise while still achieving improved temperatures across the board. The CPU fan can be slowed down even further than 1050 RPM, but in this configuration, the GPU fan is the main noise contributor, so it doesn’t really matter. Unfortunately, running the system like this would negate the entire point of having positive pressure as the fan vents would all be open allowing dust to accumulate more rapidly 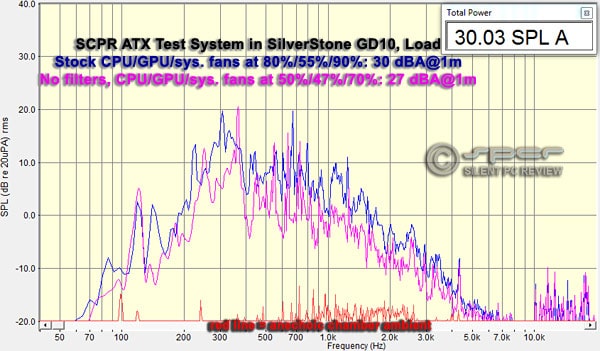 Without the filters, the system can be made quieter, but the quality of the noise is actually worse. The tone produced by the stock fans during the baseline tests is more irritating at 70% than 90% speed, negating much of the benefit. If it were up to me, I would run the system fans faster than necessary just to avoid this effect.

It’s probably not fair to compare the GD10 to small towers priced at the sub-US$100 level but our readers should have an idea of how much of a performance disparity to expect when using the GD10 to its full potential. A 5~6 dB difference is typical along with much higher internal temperatures. That being said, if the unfiltered result would be surprisingly competitive considering how much smaller the case is in volume.

Considering the overall size of the GD09/GD10 compared to a typical tower enclosure, it performs admirably under hot and heavy conditions, but only if you remove the incredibly restrictive dust filters. That leaves the fans almost entirely exposed, ruining its aesthetics and allowing dust to get sucked in with impunity. The positive pressure setup used is efficient but unfortunately, the filters are equally efficient at choking airflow. The result is high temperatures and high fan speeds to tame the extra heat which leads to considerable additional noise. Although we didn’t do it, some simple modifications of the filters to reduce the impedance could be helpful.

In this day and age, full ATX for a HTPC doesn’t make really sense unless you plan on multiple add-on cards, particularly video cards, which the cooling system can’t handle. If you take gaming out of the equation, you could shrink it further to mini-ITX without sacrificing a thing. Being a bigger case doesn’t free it from compatibility issues either. Some of the unusually large video cards may not fit and downblowing CPU coolers are limited in height unless the drive cage is jettisoned, depending partly on motherboard layout. SilverStone could have addressed this issue by outfitting the chassis with a slim optical drive bay. Furthermore, right-angle power and data connectors are required for 3.5 inch drives if a video card of appreciable length is used.

The GD09/10 fill a gap for those who want ATX compatibility but don’t want a typically bigger HTPC case like the GD07/GD08 and other models before it. Their design is versatile and clever to get ATX capability in just 27 liters volume. But there are numerous smaller alternatives and perfectly capable HTPC gear to fit those smaller cases. I do like the internal design, build quality, and ease of assembly, but ATX may be overkill for a modern HTPC.

If you need both optical drive and a full-sized graphics card in a HTPC, GD09 and GD10 are OK choices. There really isn’t much serious competition for them in this product category, and all other ATX HTPC cases are bigger. I prefer the GD09 to over the GD10 as it’s cheaper and has a cleaner look. The GD10’s locked up front panel is useful if you have mischievous children/pets who enjoy poking at ports and buttons.

Our thanks to SilverStone
for the Grandia GD09 & GD10 case samples.