The SilverStone Kublai KL05 is an ATX tower that attempts to offset its budget build quality with a more substantial feature-set than competing low cost cases.

While their extensive chassis catalog is diverse today, for many, SilverStone
is still synonymous with what first made them stand out from the competition.
The name evokes the image of a subdued yet classy black case with a striking
aluminum face with the subtlest of glints. It also reminds me of the inherent
quality construction back in the day, something that is rare to see in modern
times. Aside from a passing resemblance, the Kublai KL05 unfortunately doesn’t
have a lot in common with the iconic SilverStone towers of yesteryear; this
is a budget model.

Manufacturers typically send us their best and brightest products to review,
yet their lower cost offerings may be more important as they represent a greater
portion of the market. It can be argued that they are tougher to design as you
have to carefully pick and choose what to include and where to skimp to hit
the right balance of features and cost. Typically aesthetics and build quality
are compromised, and this is evident in the Kublai KL05.

The KL05 is more or less a typical ATX chassis with plain blocky shape and
top/front panels made of plastic rather than aluminum. It’s a dark chassis with
a lanky profile, slightly narrower than most towers and tall at 52.5 cm (20.7
inches). Contributing to its considerable height are 8 expansion slots, and
more notably, a thick compartment at the top designed to hold dual fans or a
long radiator. Despite this, cooling is not its strong suit as it can boast
only a only a single included 120 mm fan, though all the fan intake placements
have dust filters (of varying quality). Our sample, a KL05B-Q, is more
geared toward quiet operation as it sports a solid cover over the front fan
positions with ventilation along the sides, and foam padded side panels. The
other version, the KL05B-W, features a small side window, a fully ventilated
mesh front, no padding, and LEDs on the fan.

The accessories are fairly minimal. The assembly guide is one sheet of paper
folded in half, and the screws provided don’t include any for additional fans.
The inclusion of a nut-driver for the standoffs and a set of four thin zip-ties
is the most luxurious aspect of the whole package.

The Kublai KL05’s internal construction is sub-par for a SilverStone chassis.
Plastic has replaced aluminum on the outside, and on the inside, the bones are
rather anemic. The side panels and interior are fairly thin and the hard drive
cages in particular are poorly supported.

Like many budget cases, assembling a system inside the Kublai KL05 is relatively
easy except for making all the cables at the back fit. There is only 18 mm of
space behind the motherboard tray and this is effectively reduced to 15 mm due
to the useless foam sheet on the side panel.

The system is placed in two states: idle, and load using Prime95 (large FFTs setting) and FurMark, an OpenGL
benchmarking and stability testing utility. This puts more demand on the CPU and GPU than any real life application. Throughout testing, system temperatures, noise levels, and power consumption are recorded. During the load test, the system and GPU fans speeds are adjusted to various levels in an attempt to find an optimal balance between cooling and noise while maintaining a GPU temperature of 80°C at 22°C ambient.

For our baseline noise tests the system is left idle with the CPU fan at minimum speed and the GPU fans are completely off by default while the system fans are set to a variety of speeds. As I mentioned earlier, a Scythe 120 mm fan has been added to the system as an exhaust fan and is kept at the same speed as the intake fan.

With the system fans inactive, the system measures 15~16 dBA@1m with the bulk
of the audible noise being contributed by the Seagate
SSHD. The drive is mounted in the most stable location, but there is
still some vibration noise that can be heard over the gentle sounds generated
by the other fans. The system fans begin to have a measurable impact on the
machine’s acoustics at 550 RPM (40%) with the overall noise level remaining
quiet up to 840 RPM (60%). At full speed, 29~30 dBA@1m is emitted. 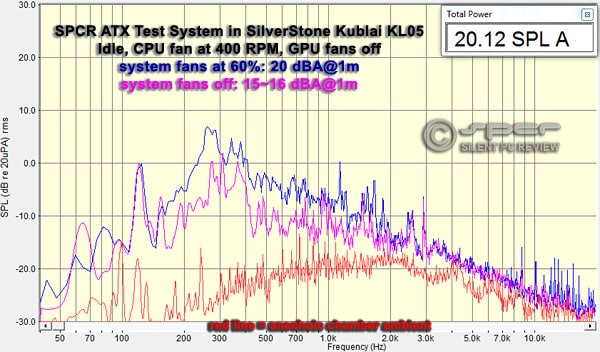 The single included fan has reasonably good acoustics with no audible tonality
and a pleasant sound throughout much of its range. It does have a somewhat buzzy
profile at higher speeds, typical for most case fans, while the added Scythe
fan is mostly smooth and innocuous sounding. The two fans actually improve the
machine’s overall noise character, helping mask the vibration effects of the
SSHD on the chassis.</p > 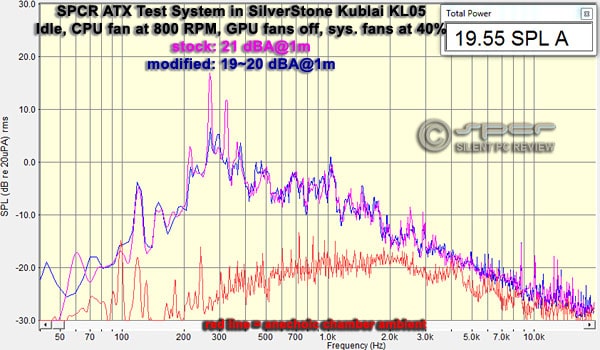 For our full system testing, the CPU fan is sped up to 800 RPM to better tame the heat output of the processor. Unfortunately this causes significant tonality at and around 300 Hz, resulting in the SPL rising to an unusually high 21 dBA@1m. It turns out that the vibrations from the CPU fan (which are typically inaudible in other cases) are transferred to the heatsink which is in direct contact with the side panel. The panel shakes, even when the fan is positioned below the top fin of the heatsink. A small block of foam taped to the top of the CPU cooler eliminates this problem completely. The side panel pressing down on the foam is enough to steady the heatsink/fan, lowering the noise level by 1~2 dB but creating a slight bulge at the side of the case. With this issue out of the way, let’s continue to our load tests.

In an idle state, the internal temperatures are comfortably low with the CPU running cooler than 30°C and the motherboard, SSHD, and GPU below 35°C. Maintaining the same system fan speeds (40%) on load causes a substantial increase in thermals for all components aside from the SSHD, which remains completely unaffected as it sits on the case floor far away from all the action. The CPU and motherboard heats up by 33°C and 13°C respectively, and stabilizing the GPU at 80°C requires GPU fan speeds of 1310 RPM (46%). In this state, the machine generates a moderate noise level of 24 dBA@1m.

Raising the system fans to 60% speed allows the GPU fans to relax to the tune of 240 RPM, and this helps cool down the CPU by 4°C and the motherboard by 2°C, all while maintaining the same noise level. As the system fans have a more pleasant pitch than the GPU fans, the overall acoustics actually improves slightly. 70% system fan speed allows the GPU fans to drop to minimum speed but the overall sound output goes up, so the machine can’t really be made any quieter under our testing conditions. 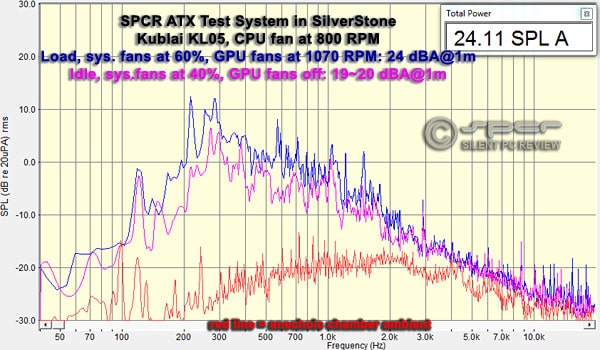 On load, the system doesn’t qualify as quiet but I wouldn’t characterize
it as loud either. Its pleasing acoustic profile makes it seem quieter than
it measures; it lacks audible tonality and other effects so it sounds inconspicuous,
which is precisely what we want.

While not a particularly impressive performer, the KL05 puts up some decent
numbers for a sub-$100 case. It doesn’t come near to matching the thermals and
acoustics of the Fortress FT05, but it can boast much lower temperatures compared
to the much pricer NZXT H440
while producing the same noise level. The H440 is a superior case in almost
every way but it has a significant airflow problem that allows the lower cost
KL05 to score a decisive win.

In many ways, the SilverStone Kublai KL05 is a prototypical budget case. The
build quality is lacking as the entire chassis is thinly constructed and the
side panels and 3.5-inch drive cages aren’t properly secured. The top of the
side panels pop out slightly as they don’t have anything to latch onto while
the drive cages have a serious amount of wiggle room. The latter is particularly
troublesome as without sufficient stabilization, the top cage is incredibly
vibration-prone to the point that I would advocate its removal. I feel the case
could stand to be a bit wider to improve clearance for the CPU cooler and cable
stuffing behind the motherboard tray. Furthermore, there’s only a single 120
mm fan included in the package and the dust filter on the bottom of the case
is just an exposed sheet of metal mesh with sharp corners.

What differentiates the KL05 from its competitors is its feature-set. It has removable drive cages with tool-less drive trays, and individual 2.5-inch drive mounts at the back. The dedicated 120/140 mm fan/radiator compartment at the top of the case is a nice touch for enthusiasts interested in watercooling, while the more noise conscious will appreciate the acoustic damping foam, though the sheet on the right side panel is pointless and just gets in the way. Despite the restrictive front intake filters, it’s performs well enough, at least when an extra fan is added.

The SilverStone name carries a certain cachet that is mostly lost in this offering.
To hit a MSRP of US$70, corners have been cut and this is evident in
pretty much every physical aspect of the Kublai KL05. This is obviously necessary
to keep the cost low but I still expect more attention to detail from a tower
bearing the SilverStone logo. The problems mentioned are rather basic in terms
of case design so it’s disappointing to see them, even if it is one of the cheaper
models in SilverStone’s lineup. A few simple modifications can remedy most of
my concerns, but in its current state, I’m not convinced the features they managed
to squeeze in is sufficient compensation.

Our thanks to SilverStone
for the Kublai KL05B-Q case sample.