The SilverStone Precision PS11B-Q is a modestly sized budget tower that follows the tenants of quiet case convention by having a mostly sealed off exterior, a single quiet fan, and padded side panels.

A few months back I took a look at the SilverStone Kublai KL05B-Q, a budget case from a manufacturer not well known for affordable cases. It performed fairly well but lacked the fit and finish of their more popular/expensive models. The side panels didn’t fit as well as I would have liked and he drive cages were incredibly vibration prone, but it had some features you don’t typically find in budget towers. Most notably, it had a dedicated radiator compartment which made it look overly tall and lanky.

The Precision PS11 is a budget case in the same vein, though more modestly sized and even lower in price at US$50. It stands under 17 inches tall but it is somewhat wide due to 140 mm fan support at the front and beveled side panels with center sections extending outward, presumably to allow for bigger components and more cabling. It has a plain matte black finish with a plastic front panel that looks a bit darker than the rest of the chassis. The only flourish is a shiny metal strip across the front bezel with a mirror finish bearing SilverStone’s branding.

Like the KL05, the PS11 comes in two different models. Our sample is the mostly solid PS11B-Q as opposed to the PS11B-W which sports a side window, fan placements on the ceiling, and a front-facing mesh intake grill that allows more air in. Another difference is the B-Q has foam padding, so it’s a silence-oriented tower according to modern case conventions.

The PS11 offers little in the way of extras. Included is a nut-driver for tightening the standoffs, all the necessary screws (no fan screws though), a few zip-ties, a rudimentary security lock, and an assembly guide printed on just a single folded sheet of paper.

The PS11’s interior is more thinly constructed than most cases, but feels fairly solid as both drive compartments are secured to the chassis on two sides and to the motherboard tray, stiffening the entire assembly. The internal layout is relatively standard for a tower, designed primarily for front to back airflow.

The assembly process is straightforward as the only unusual mounting system is a simple tool-less scheme for 3.5 inch hard drives. Not having a center drive cage makes it feel more spacious when installing the motherboard and graphics card, but it’s very tight at the top as the edge of the board comes close to touching the ceiling. If a large CPU cooler is going to be used, I advise plugging in any necessary connectors to the top half of the motherboard before securing it.

For our baseline noise tests, the system is left idle, the CPU fan is set to its minimum speed under PWM control (400 RPM — the Nexus fan is run at the same speed for consistency even though it can be shut off entirely), and the GPU fans are off by default. The system fans are connected to controllable fan headers and are set to a variety of speeds using SpeedFan. This gives us a good idea of what the stock fans sound like at different speeds with minimal interference from other sources.

Once the system started up, I was greeted with strong vibrations caused by the hard drive. Pressing down on the side panels eliminated this effect, so I wedged a thick foam block between the motherboard tray and the right panel to help immobilize it. This helped tremendously but I couldn’t duplicate the result on the left side, possibly because there’s no easy way to stiffen the middle of the panel’s bulge.

Though my little modification does help, enough vibration remains to drive the base noise level up to 16 dBA@1m, slightly higher than usual compared to a typical tower case. The included fan is very quiet though, adding only 1 dB to that total at speeds between 430 and 760 RPM. At full speed, it only generates 21 dBA@1m which is fairly low for a single fan. The added Scythe fan produces similar noise levels at lower speeds, but at 1000 RPM and above, it becomes much louder. Matching the stock fan’s 1220 RPM top speed adds a substantial 6 dB to the total. 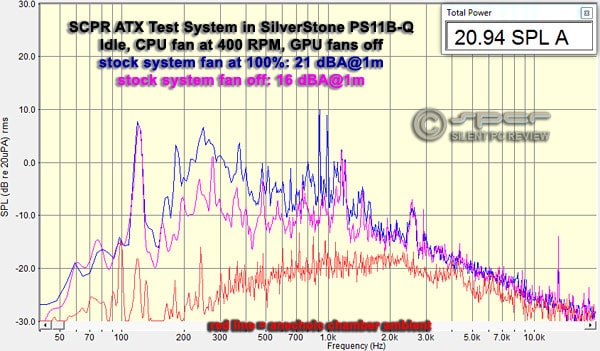 At speeds up to about 800 RPM, the stock fan isn’t audible over the rest of the system unless you put your ear right up to the case. At 80% speed, it has a relatively smooth profile, but at close proximity there’s a noticeable moderate frequency tone. At 100% speed, the tone becomes stronger and higher in pitch (between 900 and 1000 Hz) and can clearly be heard from a distance. If you have sensitive hearing I would suggest keeping it under 1000 RPM. 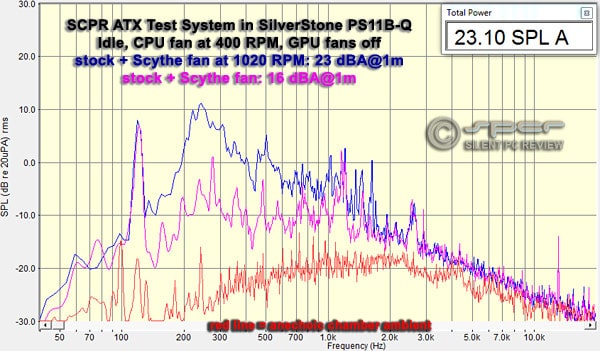 With system fans running at 60% speed, the GPU core hits the target temperature with its fans running at 47%. However, the CPU temperature ends up at 71°C, past the throttling threshold of our CPU. As a result, the processor underclocks itself slightly, reducing the overall power draw by 6~7W. The PS11 is the first case to fail our test at 60% fan speed, though it should be noted that the high ambient temperatures this time of year probably pushes it over the edge. Based on previous heatsink data, the Nexus fan should be set to 900 RPM to approximate the performance of our usual cooling setup, but even at top speed, it’s not quite enough.

80% and 90% speed keeps the CPU at nominal settings but the temperatures are still fairly high. I have full confidence in the heatsink/fan combination and exhaust fan selection, and the GPU cooling seems fine as the video card fans require fairly low speeds. That seems to to indicate that the lack of ceiling ventilation is the culprit. The restrictive intake vents certainly don’t help as removing the filters allows the GPU fans to slow slightly while also netting lower temperatures across the board. 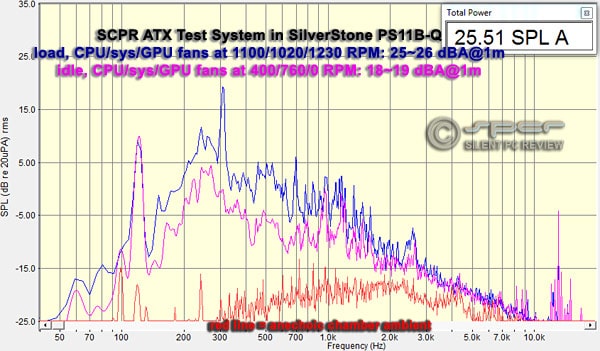 At the PS11’s sweet spot (80% system fan speed), the noise produced is mostly innocuous, similar to the baseline test at the same speed. The added contribution of the Nexus fan is minimal as it’s a very smooth sounding fan. The GPU fans do add some tonality at ~300 Hz but the pitch and strength is low enough that most users will not be bothered by it.

Even after adjusting the PS11’s results to match our standard 22°C ambient temperature, the picture is not flattering. Among the sub-$100 cases we’ve tested, it’s the worst performer, matching the Antec P100 for noise, but with substantially higher CPU and motherboard temperatures. The contrast is particularly striking against the similarly designed Kublai KL05B-Q, though it should be noted the KL05 has a taller body with vents at the top and a different intake fan.

Many manufacturers seem to think that a silent case is one that is sealed off as much as possible to keep the noise being generated within from reaching our ears, but these types of designs are not effective enough to compensate for the higher temperatures they naturally cause. They may be quieter when the thermal demand is low, but when things heat up, a case with better airflow almost always wins out, all other things being equal. The PS11B-Q follows the more closed design paradigm. Lacking ceiling vents and having small intakes lined with restrictive mesh, it struggles when pushed to the brink.

The build quality of the case is as good as you can expect for US$50. It’s thinly constructed but the interior doesn’t feel cheap as the drive bays are well secured to the rest of the chassis, lending and receiving extra stability, so structural integrity is superior overall compared to most budget towers. However, there’s also no mistaking it for a mainstream model, especially if it’s sitting on a smooth surface. The feet hardly gives it any traction, so a stiff shove could send the case sliding by a foot or so, assuming it doesn’t topple over first.

The hard drive cage, while held sturdily in place, is poorly conceived, as the tool-less install mechanism grips the drive at only one point. The drive is mostly free to tremble against its metal surroundings and this effect seems to be amplified by the bulge of the side panels. Even if that wasn’t an issue, I’m not a fan of the bulging panels. Aesthetically, it’s an eyesore, and from a practical standpoint, it adds nothing to the left side. It does provide extra space for cabling on the right side, but they could’ve just made the case wider and called it a day.

Hampered by poor CPU cooling and a vibration prone drive cage, I can’t recommend the SilverStone Precision PS11B-Q, even for US$50. If you’re looking for an affordable ATX case, the windowed PS11B-W is a more suitable candidate. Its vastly improved airflow scheme should address the performance issues, and best of all it doesn’t carry a price premium over the B-Q.

Our thanks to SilverStone
for the Precision PS11B-Q case sample.