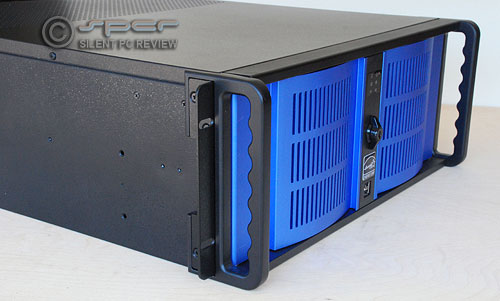 The Pro Studio i7 is meant for use as a digital audio workstation in a recording studio, and has the distinction of being Energy Star certified. StoneWave, an audio computing specialist, says it is very quiet, so we took it for a spin in our anechoic chamber.

StoneWave Productions is a US system integrator focused exclusively on Digital Audio Workstations (DAW) and other electronic products for digital audio recording. Digital Audio Stations dominate audio recording studios today, whether they’re based on PCs or Macs, or monster racks of dedicated electronics that only huge commercial studios with mega-stars can afford. Analog audio recording with LP vinyl records as the final output is probably the only non-digital niche to survive in this industry. In amateur home recording studios, run mostly by musicians and their friends, Macs and PCs rule. Considering the current state of the commercial music industry, it’s likely that this decentralized "cottage industry" is the growth sector in audio recording.

What exactly is a DAW? It is a system to record, edit, and play back audio recordings using digital processing. In general, a DAW is a combination of multi-track recording software and high quality audio hardware — especially analog-to-digital and digital-to-analog converters — in a PC. Serious software and soundcard suitable for DAW use began appearing for Apple systems in the late 1980s, with equivalent products for Windows PCs coming a few years later.

The Pro Studio i7 sample that StoneWave Productions sent for us to review cannot be accurately described as a DAW because it came with no audio-specific software. The PSi7 also did not incorporate any audio recording hardware, other than the usual sound card integrated in the motherboard. This practice of calling a rack chassis PC a DAW is not uncommon among vendors of digital audio PC gear, however. To StoneWave’s credit, the hardware is serious enough for the machine to be considered a workstation. Cakewalk Sonar pro audio production software and hardware are also offered as preinstalled options on the order/configure page for the PSi7.

As its moniker makes clear, the Pro Studio i7 has an Intel i7 CPU— and a high-end motherboard from Gigabyte at its core. The PSi7 is promoted not only as a powerful platform for audio recording, but also for being Energy Star approved, eco-friendly and extremely quiet.

NOTE: There may be discrepancies between the specifcation details reported here and the specs at StoneWave’s web site, because the company was making adjustments to the product even as the testing and review was being conducted.

The serious look and feel of the Pro Studio i7 continues throughout the product.

Opening up the Pro Studio i7 sample shows tidy assembly and wiring, and high quality parts.

Before the usual gamut of tests were run, some time was spent using the system, web browsing, and updating the Windows XP Pro installation that the unit came supplied with. It worked swiftly without any hiccups.

The test procedure is to measure noise (SPL), key component temperatures, and AC power consumption at various loads. No performance testing was performed. The performance of an Intel i7-920 is evry well documented all over the web; suffice it to say that it should be up to tackling any digital audio tasks.

The PSi7 is a very quiet PC in normal use. It is unlikely to be heard in any normal recording studio, even when no one is making any music. Not only is the level very low at 17 dBA@1m, the overall character is smooth and benign. The hard drives could be heard when seeking but barely when idle.

The 23 dBA@1m level was reached after more than an hour of extreme stress testing of both the CPU and the video card. The increase in noise was the result of the two fans on the heatsink speeding up in response to the heat of the CPU. At this intense load level, the overall noise is plainly audible in a quiet room. However, it is unlikely that any DAW in a simple record mode would see such a high load as our test of Prime95 and Furmark.

The AC power consumed in off or sleep mode was very low. The 93W load at idle just clears the Energy Star requirement for a workstation of this class. It’s not low for PCs in general, but modest for a system of these components. There are two numbers for full load AC Power: 237W is the load seen when the stress test was first begun, and 250W was seen at the end, more than an hour later. This is fairly typical, the result of components heating up and becoming less efficient as a result, particularly the voltage regulators around the CPU on the motherboard, and the power supply unit itself.

Both hard drive and graphics card temperatures stayed well within safe limits. The aluminum enclosures for the HDDs may have helped in this regard. The CPU temperature under load was too high, however. While no ill effects or instability was observed, 90°C is too high a temperature for comfort. You may recall that the back panel of our sample had only one 80mm exhaust fan. This means that the exhaust airflow was limited. Also, the open hole for a second fan next to the first could also act as a "short circuit" of air, causing outside air to be pull into the fan to be blown right out without any cooling effect for the hot CPU half a foot inside.

There’s some question about what is the ideal airflow design for a rack-mount workstation that’s meant to be used as a DAW. If it is really mounted in a rack that’s fully populated with other gear, then the only reliable source of cooler outside air lies at the front of the chassis. For such an application, the PSi7 sample reviewed here is not ideal, because most of the cooler outside air is obtained via the top panel, the perforated back portion which lies over most of the motherboard. On the other hand, if this rack is used discretely atop a desk, couuntertop or workbench, then the airflow design is perfectly fine, as long as the top panel is not blocked.

These recordings were made with a high resolution, lab quality,
digital recording system inside SPCR’s own 11 dBA ambient anechoic chamber, then converted to LAME 128kbps encoded MP3s. We’ve
listened long and hard to ensure there is no audible degradation from the original
WAV files to these MP3s. They represent a quick snapshot of what we heard during
the review. Most of the recordings listed below were made with the mic at 1m distance.

For the most realistic results, set the volume so that the starting ambient
level is just barely audible, then don’t change the volume setting again while
comparing all the sound files. Please note that some of the recordings were made at 1m distance and others at 0.6m.

There are no other PC systems we’ve tested recently which could be considered competitive with the PSi7. However, for reference sake, here are some of the other systems we’ve recorded in the anechoic chamber, mostly much smaller, lower power and less capable systems:

The high CPU temperature was serious enough to discuss it with StoneWave. This led, eventually, to a long delay in the posting of this review. Here’s a recent letter from StoneWave which summarizes the results of my conversations with them:

Another point of discussion concerned the question of Energy Star status. ES maintains a searchable database of all qualifying products. When I did a search for StoneWave products in July, the database turned up no hits. Why not? This is the reply that I received:

The StoneWave Pro Studio i7 sample reviewed here is indeed a very quiet computer. Given that the recording mode of any audio software is far less taxing than our lab stress test utilities, it is quiet enough to be in the same acoustic space where almost any type of music is recorded. Its noise footprint is small, and the character of that noise is smooth enough that the quietest notes of the music would surely render it completely inaudible. The build quality is very good, and the choice of components is intelligent and appropriate. The Intel i7-920 CPU and the Gigabyte GA-EX58-UD3R provide a solid high performance foundation for a DAW.

The amendments to the cooling setup made by StoneWave in response to our initial feedback appear to have brought the CPU temperature under load to a more acceptable level. Even so, 82°C for the hottest core is not a particularly good mark. While it is true that the SPCR test load is more extreme than any real-life application, we would still be happier with lower temperatures. A larger CPU cooler with a larger fan would probably achieve this without any increase in noise. In the space available, a big top-down cooler is probably the best practical option. But if the top crossbar was removed, a large 120mm fan tower style heatsink would probably fit as well.

While Energy Star certification might be good for marketing and PR, from SPCR’s point of view, 93W is still a fair amount of power for a PC to be drawing at idle. The power consumption is about what you’d expect of an i7-920 system with the chosen components, but it could be measurably reduced (possibly as much as 10%) with the use of an 80 PLUS Gold certified power supply (rated for 87~90% efficiency).

Finally, it’s nice to see a small company still in the fray; computing hardware is overwhelmingly dominated by giant brands. The Pro Studio i7 a good, practical product, ideal as a DAW for a home-based or small-business recording studio and fittingly made by a small specialist in the field.

Our thanks to StoneWave Productions for the review opportunity.