The F12C is a departure for Streacom, a desktop media case that uses traditional air cooling rather than a fanless heatpipe system. However, it does retains Streacom’s usual minimalist aesthetics and thick all-aluminum build quality.

Streacom is a player in the limited realm of fanless PC hardware, a manufacturer that specializes in passively-cooled machines, cases, and related accessories. We’ve reviewed many of their previous offerings which employ the usual strategy of utilizing heatpipes to channel the heat to the chassis. The case itself acts like a giant heatsink with a finned exterior portions to increase surface area for more effective heat dissipation to the surround air. Typically constructed out of thick aluminum, they’re fairly pricey but for hobbyists with discerning ears, complete silence is a luxury worth paying for.

At first glance, the F12C is molded very much in the same vein as its predecessors, an expensive (US$275) all-aluminum desktop enclosure with a plain minimalist design available in both silver and black. However, it looks more ergonomic and less industrial as it relies on traditional cooling methods rather than heatpipes. Though it doesn’t ship with any fans, it’s not intended to be passively cooled, making it a big departure for Streacom. It’s being pushed as an HTPC enclosure with enough cooling potential for high-end configurations.

The chassis surface features a pleasant sandblast finish on its 4 mm thick aluminum panels. The front is featureless aside from the power button, a tiny status LED on the left side and an IR receiver slot on the right. The numerous vents are lined with thin removable dust filters. For a desktop style chassis, it has a large footprint (44.0 x 32.0 cm) that can handle an ATX motherboard and a graphics card up to 31.0 cm in length. It’s also quite tall (18.4 cm including the feet) in order to accommodate the kind of cooling required for high-end hardware.

CPU cooler height is capped at 13.5 cm according to the specifications and there are watercooling options available. A total of three fans up to 140 mm in size can be placed on the sides, along with two or three fans of varying size at the top. It can actually hold up to a dozen 3.5-inch hard drives if a mini-ITX board is used but as both the drives and fans share mounting points on the sides, drive support depends on fan configuration.

The screws and standoffs are segregated into individual plastic bags for convenience and a fully illustrated color assembly guide is kindly provided by Streacom.

The F12C’s layout is similar to an old school ATX tower flipped onto its side, with the power supply next to the CPU portion of the motherboard. There’s little to say about the internal construction of the F12C as it’s essentially a big cavity with almost everything installed against the sides.

Without a doubt, the tension clips used to mount the universal brackets are the worst part of the case’s design. Initially, they popped on without issue but after using them off and on, they became more temperamental, perhaps as the shape of the clips warped from use. If I didn’t get the angle just right, it sometimes would refuse to go on no matter how much force was applied. At other times I found it was simpler to get it mounted over one corner and then slowly slide it over the bracket.

The chassis isn’t very spacious either so a modular power supply is highly recommended, and given the finicky nature of the tension clips, it’s best to plan out how the drives and fans will be installed beforehand so you won’t have to move them after the fact. It’s impossible to mount 3.5-inch drives horizontally on the right side due to the the power supply, and vertical placement requires right/left angle drive connectors due to the case’s height. If a microATX/ATX motherboard is used, 3.5-inch drives mounted on the left side will have to positioned horizontally, overhanging part of the board.

For our baseline noise tests, the system is left idle, and the CPU and GPU fans are set to the minimum speed possible. The system fans are connected to controllable fan headers and are set to a variety of speeds using SpeedFan. This gives us a good idea of what the stock fans sound like at different speeds with minimal interference from other sources.

The system’s baseline noise with everything set to minimum speed or off is 17 dBA@1m, which is quiet but a little high due to our choice of video card. The Asus GTX 980 Strix we normally use has the ability to shut its fans off, while the Asus HD 7870 DirectCU II can go no lower than ~1070 RPM. The two Scythe Slip Stream 120 mm fans added to the system begin to make an acoustic impact at about 30% speed. At full blast, they can get quite loud, together generating more than 30 dBA@1m. They have a pleasantly smooth acoustic profile at all speeds and the wide speed range gives us some versatility, making them a great choice for testing.

The system struggles with our standard load test, a combination of Prime95 and FurMark, which stresses both the CPU and GPU to extreme levels. The CPU fan has to be set to 100% and even then, the processor throttles slightly unless the case fans are also running at full blast. Only moderate GPU fan speeds are required to hit our 80°C GPU target temperature. For stability in this state, a fairly loud 31~32 dBA@1m is generated, with the case fans being the largest contributor.

An actual gaming test like the Resident Evil 6 Demo is substantially less demanding. CPU cooling is still important as 70% CPU fan speed is needed to keep the processor under 60°C, but both the system fan and GPU fans can be slowed considerably. The noise level under these parameters is a much quieter and easily tolerable 23 dBA@1m. 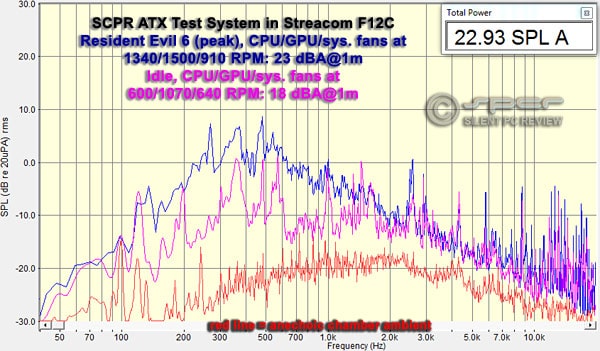 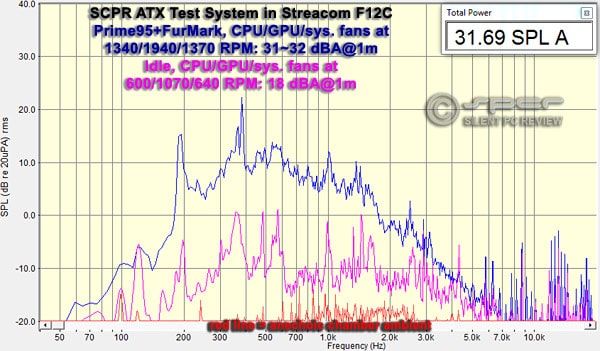 The machine sounds fairly good to our ears, even on load, as the various fans selected for the system are acoustically sound. The Scythe fans are the loudest components but they’re incredibly smooth, helping hide any noise defects from the smaller GPU fans and elsewhere. At 100% speed, the case fans do get a bit whiny but they produce a more pleasant sound than most systems outputting a similar noise level.

The one thing that stands out compared to other enclosures is the noise of our Seagate SSHD. The mounting bracket actually does a decent job of keeping its vibrations in check but the idle whirl it emits is more audible as it’s sitting adjacent to an open vent. This isn’t necessarily a bad thing but in most cases, the drive bays are more or less hidden so a single hard drive doesn’t make much of an impact on the overall sound. I suppose given the location and number of vents on the F12C, if something inside sounds bad, there’s no hiding it.

The case performs slightly better when the fan on the left side is swapped to the top of the case, set to blow down over portions of the CPU and video card. For our Prime95 + FurMark test, the CPU receives some relief such that 80% system fan speed is sufficient for stability, while the rest of the components warm up slightly. The motherboard and hard drive heat up by 2~3°C and the GPU fan speed has to increase by 250 RPM to maintain the same GPU temperature. However, the machine is still quite noisy.

Of the cases we’ve reviewed recently the SilverStone GD10 is the only model that can be fairly compared to the F12C. Both are horizontal desktop style enclosures with ATX support and their dimensions are quite similar as well. The GD10 was tested with a slightly more power hungry graphics card and a smaller CPU heatsink but had some extra help in the form of a third fan.

Though not a strictly apples-to-apples comparison, the two cases produced similar CPU temperatures and the same noise level. The 30 dBA@1m result is 5~6 dB higher than most of the tower cases we’ve examined but obviously with volumes well under 30 Liters, neither is expected to compete at that level. That being said, both cases have fairly restrictive dust filters that undoubtedly hurt performance and it’s impractical to remove them as that would leave large gaping holes.

Performance-wise, the Streacom F12C is underwhelming. Though it seems to be amply ventilated, like the SilverStone GD10, it has fairly restrictive dust filters that makes cooling high-end configurations quietly more difficult than it should be. Additionally, I was unable to use either my first or second choice of video card due to space limitations (one was too wide, the other too long). There are hard drive complications as well as the optimal vertical drive position demands perpendicular power/data connectors and this orientation can’t be used on the left side with microATX and ATX motherboards.

Some of the design choices Streacom made are innovative but flawed in implementation. The panel locking mechanisms are more low-key than regular screws but during our time with it, both a C-clip and a nut came loose. It’s a nice system but it’s somewhat of an odd solution to a problem that didn’t exist. The drive/fan mounting brackets are interesting and quite sturdy but the tension clips used to install them can be incredibly frustrating to use. Screws inserted from the outside would have been a better way to go, with the dust filter frames covering up the screw holes from view.

A HTPC is one place an optical drive makes sense yet the F12C doesn’t have that option, nor does it offer front ports of any kind. The F12C is overkill for a multimedia case, in price, in size, and in construction. Its US$275 price-tag puts it in the luxury category of cases, ATX is overly wide for a horizontal enclosure, and while a thick all-aluminum build is understandable for a passively cooled system, for a regular air-cooled case, it’s completely unnecessary.