The Polaris 120 CPU cooler marks Swiftech re-entry into the mainstream air-cooling arena. The Polaris has the form of a typical tower heatsink with a 120 mm PWM fan and a significant mass of aluminum fins, but what makes it unique are its five 8 mm thick direct touch heatpipes.

Swiftech was once one of the biggest names in air cooling but eventually stopped designing new products for the retail market, shifting their focus to watercooling. This happened so long ago that the last last Swiftech heatsink SPCR reviewed was the MCX462-V for socket A! Swiftech continued to quietly produce the MCX series with its easily recognizable helicoid aluminum pin design for newer sockets, but the company has not been in the air cooling game for many years.

The Polaris 120 CPU cooler is Swiftech’s re-entry into CPU air cooling. The Polaris has the form of a typical tower heatsink with a 120 mm PWM fan and significant mass of aluminum fins, but what makes it unique are five 8 mm diameter direct touch heatpipes made famous by Xigmatek and other manufacturers.

The Polaris 120 ships with a black and white 120 mm fan, fan clips, mounting hardware, and thermal compound. The only thing notable about the package is that an extra of every screw, bolt, and nut is included in case you happen to lose one. It’s a small gesture but very much appreciated.

The most critical aspect of installation is that the heatsink be securely
mounted. A firm mating results in good contact between the heatsink’s base and
the CPU heatspreader and more efficient heat conduction. Ideally it should
also be a simple procedure with the user having to handle as few pieces of
hardware as possible. 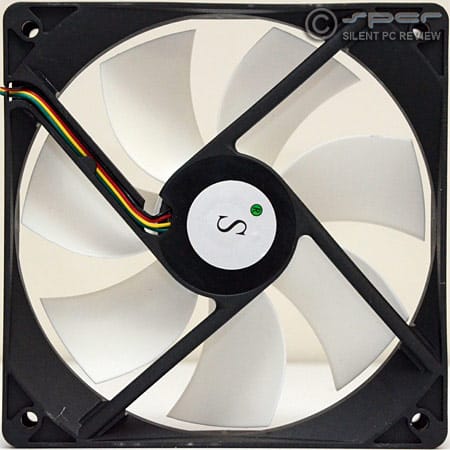 Though Swiftech provides detailed specifications, the fan lacks any identifying markers. It has the appearance of a typical 120 mm axial DC fan with seven white blades and a black housing. The trailing edges are nearly parallel with the struts, increasing the likelihood of tonal elements in its acoustic profile.

With a high maximum speed, the stock fan is very loud, turbulent and whiny from 12V all the way down to 7V. It sounds fairly smooth at about 5V, and the fan speed is equivalent to that of many low speed fans at full tilt. At 4V and below, it develops a noticeable hum. At no point does the fan become inaudible, as even at its starting voltage of 3.7V, it measures 12~13 dBA@1m.

The Polaris 120 performed pretty well, but only at higher speeds with the stock fan producing 30 dBA@1m or higher. At 5V, cooling performance was fairly poor. Further drops in speed resulted in significant cooling degradation. With its stock fan, the Polaris makes a terrible quiet cooler.

The Polaris fared much better with our reference Nexus fan, producing a 5~10°C improvement at the 12~13 dBA@1m levels. As the Polaris 120 is rather thick, we tried a second fan in push-pull configuration for improved air pressure. This only improved cooling by 3°C at 12V and 9V. A 5°C difference was recorded 7V.

The Polaris 120 ties the Zalman CNPS10X Flex for 15th place among large tower heatsinks, running the CPU about 8~11°C hotter than the leader, the Thermalright Ultra-120 eXtreme Rev.C.

Swiftech’s return to air cooling is a disappointment for quiet computing enthusiasts. Despite its five massive direct touch heatpipes, the Polaris 120 delivered middling cooling proficiency at best, at least with low airflow. The stock 2500 RPM fan easily exceeds 40 dBA@1m at full speed, so obviously it wasn’t designed to be a quiet cooler. The fan sounds much better at low speeds, but it doesn’t really become quiet unless you get it down to close to about 4V. It also isn’t terribly efficient, getting beaten handily by our reference Nexus fan at comparable noise levels.

One cause for the power low airflow performance might be how the sides of the fin stack are closed off — we don’t recall ever seeing this on a higher performance heatsink. It forces the air to flow entirely through the depth of the fin stack, and it must cause significant airflow impedance at lower fan speeds. We also question the utility of the fifth heatpipe, as four of them easily cover even a LGA1366 processor, which has about the biggest heatspreader of any current CPU. It seems like a waste of materials and expense.

It would also help if the mating was tighter, as the outer portions of the base didn’t get as much pressure as the center. Like Prolimatech and Thermalright’s latest heatsink mounting systems, there is a metal bar strategically placed above the base that could exert extra pressure. In the Polaris 120, however, it is only used to keep the surrounding frame in place rather than actively making the mount more secure. This is a missed opportunity in our opinion.

While hardly a poor CPU cooler, as a low noise heatsink, the Swiftech Polaris 120 just doesn’t cut it. The only situation where the Polaris 120 might be a good choice for quiet performance cooling is if your case is not wide enough to accommodate the majority of 160~165 mm tall tower coolers (the Polaris is only 151 mm tall). There are many cases, for example, that have a side fan above the CPU area that interferes with taller heatsinks. Otherwise, there are many better quiet high performance CPU cooling alternatives at and below the Polaris 120’s street price of US$60.

Our thanks to Swiftech for the Polaris 120 heatsink sample.