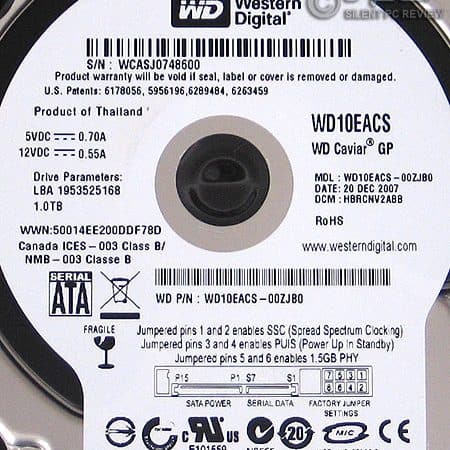 Our enthusiasm for the low noise WD 750GB Green Power hard drive prompted us to go hunting for the 1 TB flagship model so we could do more than speculate about it. With Western Digital’s odd IntelliPower system for rating spindle speed, we wanted to confirm for ourselves that it shared all the characteristics of its smaller brother — noise, power and all.

Our enthusiasm for the WD 750 GB Green Power reviewed in December 2007 prompted us to go hunting for the
1 TB flagship model so we could do more than speculate about its greatness.
With Western Digital’s odd IntelliPower system for rating spindle speed, we
wanted to confirm for ourselves that it shared all the characteristics of its
smaller brother — noise, power and all.

The terabyte HDD sample that arrived was promising — with the exception of the model
number on the label, the two drives were identical to the naked eye, with no
indication that anything important had changed. Mechanically, the only difference
should be the addition of an extra platter to accommodate the extra capacity. A quick frequency analysis test confirmed that terabyte model spins at 5,400
RPM just like the 750 GB version. Please see our WD 750 GB Green Power review for all the details. 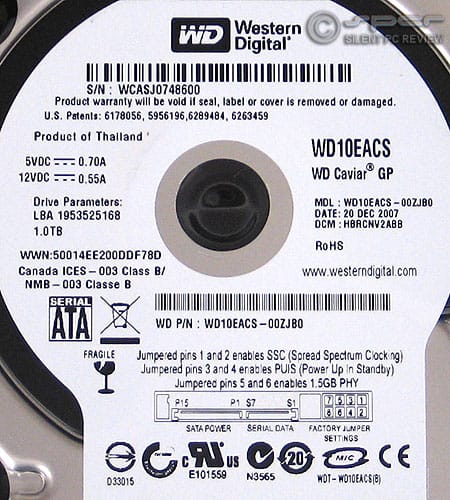 Our sample was tested according to our standard
hard drive testing methodology. Our methodology focuses specifically on
HDD noise, and great effort is taken to ensure it is comprehensively measured
and described. Performance is not tested, for reasons discussed in detail in
the methodology article. For comprehensive HDD performance testing results,
we recommend Storage
Review, who have established a long reputation as the specialist in
this field. Their review of the Western Digital Green Power can be found in
a roundup of
several terabyte drives.

Our test drive was compared against our reference drives, the Seagate Barracuda
IV and Samsung Spinpoint P80, which are profiled in our methodology article.
To get a good idea of where the drives in this review stand, it is important
to read the methodology article thoroughly. It was also compared against our
current low-noise champ: A 500
GB Western Digital WD5000KS. A
250 GB Spinpoint P120 was also included in the comparison.

Ambient conditions at the time of testing were 18 dBA and 20°C.

No noise difference between the two WD Green Power drives could be measured — and none
could be heard either. A few minor differences showed up after thorough examination,
but these are unlikely ever to be noticed outside of our lab. For example, the
terabyte drive vibrated slightly less, but with the 750GB model’s already minuscule
amount of vibration, the difference wasn’t enough to be audible. In any case,
the cause of the difference is most likely to be sample variance than any fundamental
difference between the two capacity points.

Seek noise in the terabyte drive was slightly sharper, with less underlying
rumble. This difference was clearly audible on our test bench, but considering
how quiet the seek noise is on both models, it’s probably meaningless
in a real system.

Some small differences in power consumption were also evident. Predictably,
the terabyte drive consumed more power — about a watt during seeking. Both
drives consumed 3.7W in idle, but our terabyte sample did not exhibit the odd
fluctuations in idle power that made measuring the 750 GB model so difficult.

All in all, we are pleased (and relieved) to find that the terabyte drive is
so similar to the 750 GB model. This may be the first time we’ve ever been able
to say that the quietest drive on the market is also one of the largest. The
terabyte Green Power will find a permanent home in SPCR’s home theater test
system.

Many thanks to Western
Digital for the Caviar Green Power sample.