The Thermalright Silver Arrow is a monstrous 1.2kg heatsink with 8mm thick heatpipes and a pair of 14cm fans. Does it have what it takes to beat Noctua’s flagship NH-D14 cooler?

Thermalright has a history of simple, but incredibly effective cooling products. TR’s Ultra-120 series of CPU heatsinks is the longest-lived high performance CPU coolers, remaining popular to this day despite virtually no changes over the years. The Silver Arrow shares a similar construction and look as the Ultra-120 line but in a much larger package. Weighing in at 1.2 kg and armed with a pair of 14 cm fans, this monstrosity looks to take on Noctua’s flagship NH-D14 heatsink.

While the Silver Arrow retains Thermalright’s utilitarian cardboard box design, there is a tiny bit of artwork at the side. Apparently this is as fanciful as Thermalright packages get. Inside, cushioned by foam are the heatsink itself, a pair of 14 cm fans, mounting hardware, and instructions.

The heatsink itself is not really new; it is simply a tweaked version of the apparently discontinued IFX-14 which included a small heatsink to cool the backside of the processor. We never got a chance to test the IFX-14, but the Silver Arrow should be representative of its performance. The Silver Arrow also has an updated mounting system and two fans are provided at no extra cost. It has four 8 mm thick heatpipes compared to the 6 x 6 mm heatpipes on the Noctua NH-D14. Its fin stacks are not as deep, but there are more fins and they are packed tighter.

The last Thermalright heatsink we reviewed, the Ultra-120 eXtreme Rev.C, featured a Prolimatech/Noctua style mounting scheme for Intel motherboards. The Silver Arrow has slightly tweaked hardware with thumbscrews and nuts to make it easier and faster to install. Also instead of long fan damping strips, black triangular adhesive pads are used to cushion the corners of the fans.

The Silver Arrow is composed of a copper base, four “U” shaped copper heatpipes and a stack of 55 fins on each side, all nickel-plated. By our measurements,
it weighs approximately 1210 grams, 870 grams without the fans and clips, making it slightly lighter than the NH-D14. The Silver Arrow is also taller than the Noctua by 5~10 mm; the heatsink measures 165 mm high, but with the fans centered, the overall height increases to 170 mm.

The most critical aspect of installation is that the heatsink be securely
mounted. A firm mating results in good contact between the heatsink’s base and
the CPU heatspreader and more efficient heat conduction. Ideally, it should
also be a simple procedure to minimize user error.

Testing was done on our
i7-1366 heatsink testing platform. A summary of the test system
and procedure follows.

Noise measurements were made with the fans powered from the lab’s variable DC
power supply with the rest of the system off to ensure that system noise
did not skew the measurements.

The Silver Arrow ships with a pair of Thermalright’s TY-140 fans. The TY-140 is a 14 cm seven blade fan with curved struts to produce a desirable angle with the trailing edges. The blades are rather unusual in that the leading corners are rounded and the trailer corners seem to have been cut so they are not perpendicular. The housing is also an unusual shape. 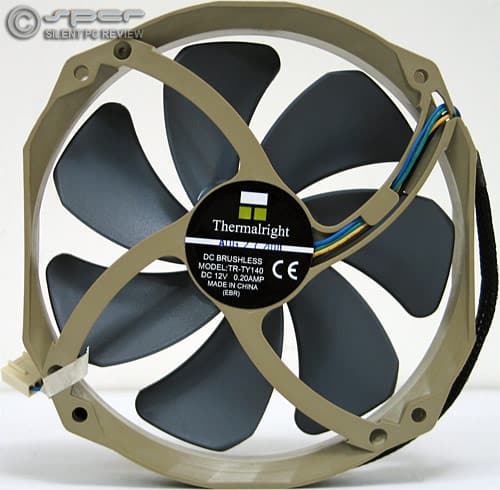 The stock fan’s acoustics are average at 9V and above. The fan generates a dry, tonal hum that decreases with speed, but it is always audible at close proximity. At 7V and below, it is barely noticeable at one meter, and if enclosed in a good case, it should be inaudible. The measured noise level is very low for a fan of its size and speed, generating just 23~24 dBA at full speed and approaching our anechoic chamber’s noise floor at 6V.

The overall performance of the heatsink with both the stock and reference fans was excellent. We found that the Thermalright fan consistently outperformed the Noctua fan at similar noise levels. The biggest difference was at 13 dBA@1m, where the TY-140 led the NF-P14 by a massive 7°C. With two fans, the Noctua caught up a bit, but was still beaten by 3°C at 14 dBA@1m. The NF-P14 has smoother acoustics, but at lower fan speeds and enclosed in a PC chassis, both should be too quiet to notice.

Using two Thermalright fans rather than one lowered the temperature by 2° to 6°C, depending on fan speed. Our reference fan was more successful when doubled up, improving cooling by 3~8°C. It seems the Noctua fans work better as a tandem on the Silver Arrow.

The following is a comparison chart of the top coolers we’ve tested so far on our LGA1366 heatsink platform. The results were generated using our reference Noctua 140 mm fans as is indicative of CPU cooling performance with dual low airflow/noise fans.

As an ultra-low noise dual fan cooler, the Silver Arrow comes out on top, just barely edging out the Noctua NH-D14 at the 14 dBA@1m level. The difference is small enough to be ignored for practical purposes. When using Noctua’s fans, the Silver Arrow is less efficient. The stock fans seem to be superior, at least when used on the Silver Arrow with its thinner fin stacks and tighter spacing.

Incidentally, though the downblowing NH-C14 uses the same fans as our reference models, there was a 1 dB difference at 6V; this may be due to slight variations in the fan samples or the difference in orientation.

The following is a comparison chart of the top single fan coolers we’ve tested so far on our LGA1366 heatsink platform. The results were generated using our reference Nexus 120 mm fan as is indicative of CPU cooling performance with a single low airflow/noise fan.

The Silver Arrow is another in a long line of successful heatsinks from Thermalright. Taking a slightly different approach than the Noctua NH-D14 by using narrower, more densely packed fins and thicker but fewer heatpipes, the end result is more or less comparable. Both the D14 and Silver Arrow provide only a slight improvement over single-fan heatsinks, at least with a Core i7 at stock settings. But if you’re looking to cool a heavily overclocked processor, undoubtedly the extra surface area provided by these titans will come in handy. The recent change in Thermalright’s Intel mounting hardware also brings it up to par in ease and security with Noctua’s installation system.

The TY-140 fans that ship with the Silver Arrow perform well compared to the NH-P14’s that ship with Noctua’s various heatsinks. At similar measured noise levels, the Thermalright fans consistently delivered better temperatures, especially when we tested the Silver Arrow with just a single undervolted fan. The bad news is that they don’t sound as good, generating a low frequency hum that is absent in the NH-P14’s. The good news is at lower fan speeds, you probably won’t be able to hear the difference, especially if it’s mounted in a case. Also, NH-P14’s have a high starting voltage (6.4V vs. 4.9V) and lack PWM, so running them at low speeds requires a dynamic fan control system to ensure they actually start spinning when the PC is turned on. This can be problematic as some motherboards don’t offer more than one fan header with voltage control.

With a street price of US$70, the Silver Arrow is on par with the NH-D14 in cost. For many, the choice may simply come down to availability and price, but if you’re looking for a top-notch CPU heatsink and money is not a concern, you can’t go wrong with either.

The Thermalright Silver Arrow is Recommended by SPCR.

Our thanks to Thermalright for the Silver Arrow heatsink sample.