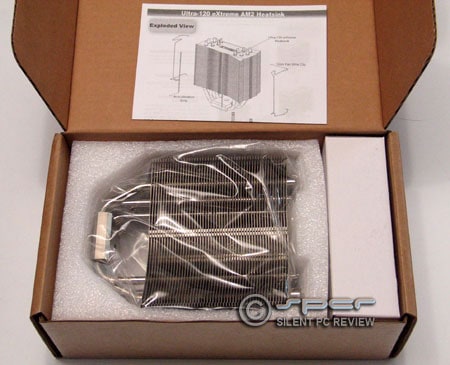 They added two more heatpipes to the Ultra 120 and renamed it the Ultra 120 eXtreme. Did this simple modification improve the already excellent performance of one of the biggest tower heatsinks around?

Thermalright has a long tradition of making excellent heatsinks with simple,
aesthetically pleasing designs. Its previous flagship CPU cooler, the massive aluminum tower Ultra 120, gave the low airflow champ Scythe Ninja a serious run for its money. Not one to sit idle,
Thermalright improved the design by increasing the number of heat pipes
from four to six and added the moniker "eXtreme" to the name. With
the original Ultra-120 being a strong performer already, the question we look
to answer is: How much difference can two heatpipes make?

The Ultra-120 eXtreme is almost identical to its
brother, the Ultra-120, with the exception of two extra heat pipes. An interesting aspect about the number of heatpipes: While there are technically just six heatpipes, in practical terms, they act like 12 heatpipes. The "evaporator end" is actually the center of each heatpipe, which is clamped at the base, at the trough of its "U"-shape. This is where the coolant in the pipes get evporated due to the heat of the CPU. The ends of the heatpipe go up through the fins separately on either side of the base, so each heatpipe actually has two condenser ends. Thus, 12 pipes go through the fins. So while only two lengths of heatpipes were added, the effective number of pipes went from eight in the Ultra-120 to twelve in the Ultra-120 eXtreme

The extra heatpipes
makes the eXtreme 45 grams heavier than the Ultra, but the difference is insignificant compared
to the overall weight of the heatsink. Thermalright’s bolt-thru system for
mounting their heavier heatsinks is very secure, so this should not be an
issue. As it stands 16cm tall, narrower cases cannot accomodate the Ultra-120
eXtreme’s substantial height. In addition, any fan ducts near the CPU area
will most likely need to be removed to make way.

Another issue: Many computer cases have a front-to-back crossbar that adds strength and provides additional support for the power supply. With some motherboards,
in the proper "east-west" orientation, the Ultra-120 eXtreme may
hit that support bar. This was the case with an Antec Solo case and the
Gigabyte GA-965P-DS3 motherboard we reviewed a few months ago.

The mounting hardware included is limited to LGA775 and socket AM2. There are two different sets of spring loaded bolts; one set each for 775 and AM2. Such spring loaded bolts, in our opinion, are the very best way ot ensuring secure, consistent installation of heavy heatsinks for DIYers. If
you have an oddball AM2 motherboard without the standard retention bracket,
you will need to obtain Thermalright’s AM2
Bolt-Thru-Kit. Installation on older AMD sockets 754, 939, and
940 require the Socket
939 Bolt-Thru-Kit. Use with socket 478 may be possible with the
P4-478
Heatsink Retention Kit.

Aside from this, compatibility is pretty good. The space
between the base and the bottom fin is fairly large, avoiding interference
with most motherboard components except for the most extravagant of northbridge
heatsinks such as those found on the Gigabyte GA-P35-DS4/DQ6 (the only models
listed as incompatible by Thermalright at the time of writing). On some
motherboards, the heatsink may overhang the top edge of the board by a few
millimeters. This may be an issue depending on how much clearance exists
between the motherboard and power supply.

Since the body of the cooler is virtually identical to the Ultra-120, we refer
you to our
Thermalright Ultra-120 review rather than repeat the majority
of our observations.

Installing the Ultra-120 eXtreme on our LGA775 test bed was straightforward.
On the back side of the motherboard, the four nipples on the backplate align
with the four mounting holes around the socket. The heatsink is goes atop of
the processor (with thermal compound applied of course) and the mounting bracket
slips between the heat pipes above the base. At the center of the base there
is a notch to line up the mounting bracket properly. To be perfectly clear, there’s no way to install this heatsink without access to both sides of the motherboard. It cannot be done with the motherboard mounted in a case.

The bracket
comprises two "arms", pivoted at the center like a pair of scissors. It must be first put through the the space between the heatpipes, and then the ends pulled part apart
until they are 90 degrees to one another, forming a large "X." Finally,
four spring-loaded bolts screw through the bracket and into the nipples of the
backplate on the otherside of the board. Once tightened, there is very little
wiggle room for the heatsink. This bolt-thru scheme is one of the most secure
we’ve encountered and it is miles ahead the stock LGA775 approach.

Silicone strips
go on the edge of the face of the heatsink to prevent vibration from being transferred
from the fan. On each side of the cooler there are tiny holes at the top and
bottom to facilitate the fan clips which slip inside. The clips hook into the
screw holes of a 120mm fan. Note: you will need a fan with open corners or the
fan clips cannot hook onto them. Some Nexus and Yate Loon fans, most notably, have
closed corners.

Testing was done in accordance with our
unique heatsink testing methodology, and the reference fan was profiled
using our standard fan testing
methodology. A quick summary of the components, tools, and procedures follows
below.

Sound pressure level (SPL) measurements were made with the fan powered from
the lab variable DC power supply with no other noise sources in the room. The
ambient conditions during testing were 18 dBA and 22°C.

Load testing was accomplished using CPUBurn to stress the processor, and the
graph function in SpeedFan was used to make sure that the load temperature was
stable for at least ten minutes. The fan was tested at four voltages: 5V, 7V,
9V, and 12V, representing a full cross-section of its airflow and noise performance.

The Ultra-120 eXtreme performs admirably. At 5V, the
temperature is acceptable, while at 7V (effectively inaudible), the temperature
rose only 17°C above ambient. When the fan voltage is cranked up
further, it really begins to stand out, with a paltry load temperature of 12°C
above ambient at 12V, while only generating 23 dBA of noise at one meter. It’s
an excellent candidate for heavy overclocking with a high airflow fan.

The acoustic characteristics of the Nexus 120mm fan have
been documented extensive in previews articles and reviews, so a detailed analysis
of the noise will not be provided here. Listening from a distance of one meter
in our quiet lab, it is very quiet at full speed, barely audible at 9V, and
completely inaudible below 7V. The noise is smooth and low and motor noise is
almost nonexistent below 9V. In the 7~9V range where it is most likely to be
used, the dominant noise is a slight whoosh of air turbulence.

There was a question from one of SPCR’s editorial review board members whether the tighter fin spacing makes the Nexus 120 (or any other quiet fan) sound louder with the U120E than with a heatsink like the Ninja where the fin spacing is much less dense. We can report that at least with the relatively low RPM and airflow of the Nexus fan, even at 12V, there was no measurable difference in SPL or audible difference in the turbulence noise. With a higher airflow fan, however, the tighter fin spacing could lead to higher turbulence noise.

There are really only two serious competitors: The Ultra-120 and the Scythe Ninja. Both heatsinks were
tested previously with the same reference fan on the same heatsink testing platform, so direct comparisons can be
made. The Ultra-120 eXtreme surpasses its predecessor by about 3°C
at all four fan voltage levels. It can’t quite compete with the Ninja with the reference fan at 5V,
but this is only a useful comparison if you are considering passive cooling,
as the noise difference between 5V and 7V is indistinguishable from all but
the closest of distances. The Ultra-120 eXtreme really starts to shine at 7V
where it matches the Ninja’s performance, before overtaking it at 9V and 12V.
The extra airflow definitely helps the transfer
of heat through the relatively tight fin spacing.

The installation system is simple, and very secure. Owners of older socket
754/939/940 platforms will have to buy extra mounting hardware to use the Ultra-120
eXtreme, but it’s unlikely such users would be willing to pay for the very best
in air cooling for their semi-outdated systems, so this is a minor issue.

Compatibility is fairly good, considering the sheer size of the heatsink. The majority of potential problems are related to the eXtreme’s height or width. Large gaudy northbridge/VRM heatsinks may cause headaches, but the bigger potential problem is interference with components "north" of the motherboard; specifically, the power supply or the front-to-back support crossbar found in many cases. In most
setups, the preferred orientation is "east-west" (with the fan blowing
towards the rear of the case). If incompatibility forces the U120E to be installed in "north-south"
orientation, the air coming off the CPU is blown towards the power supply and may cause its
internal fan to speed up and become noisier under load.

Thermalright does not ship a fan with their products, which increases its total ownership
cost, but most silencers will want to pick their own anyway.
Keep in mind the fan should come with open corners for the Thermalright fan
clips to hook onto — otherwise get your hacksaw (or other tool of choice) ready
for some fan modification.

The Thermalright Ultra-120 eXtreme is not a revolutionary new product, but
a slight tweak on a previously successful design. They took a simple, brute
force approach by only adding additional heat pipes and it worked, though not
by leaps and bounds. Its tight fin spacing still hurts performance with ultra
low airflow (a Nexus 120 at a ridiculous 5V), but otherwise, it is the best performing heatsink
we have reviewed to date, and therefore the new cooling king at SPCR. For
just how long remains to be seen, as Thermalright has created another monster, the IFX-14,
which we hope to scrutinize soon.

Our thanks to Thermalright,
Inc. for the Ultra-120 eXtreme sample.