The Venomous X Silent Edition is a combination of a potent Thermalright heatsink and a pair of extremely low speed fans. Though not completely “silent,” it is probably the quietest actively-cooled CPU heatsink available.

We’ve encountered many PC products over the years that have been described by its manufacturer as “silent” but as silence is defined as the complete lack of noise, most inevitably fall well short of the promise. Once you see a fan, at best it can be described as is “inaudible” or varying degrees of “quiet.” Present us with a “Silent Edition” CPU cooler with not one, but two fans, and we could suffer from a vertigo attack from the amount of eye-rolling required. That being said, Thermalright’s Venomous X Silent Edition might just have what it takes to be the quietest and most effective CPU heatsink to make this claim.

It is unclear how the retail version of the Silent Edition will be packaged. Though sold as a single unit, our sample arrived at our door in separate pieces, one unusually decorative box for the heatsink, one box for each 600 RPM fan just as they are sold in retail channels, and even individual cardboard containers for two plastic fan holders. The fan cages seem to a redundant inclusion as the heatsink ships with the traditional metal clips as well, which are superior in that they allow the use of 14 cm fans (provided they have 12 cm mounting holes). The Silent Edition also ships with a 4-pin PWM fan splitter cable to run both fans off the same header, though they are 3-pin models and thus lack PWM support.

The Venomous X is not a new heatsink, having been made available in several forms for over a year. If you’re not familiar with it, it is very similar to the Ultra-120 eXtreme in design and composition. The overall dimensions are almost identical though the eXtreme is 5 mm wider as the center portion of the heatsink juts outward slightly. The shape of the fins on the Venomous X are also more stylized and its heatpipes are arranged in a different pattern.

The Venomous X also appears to have a larger fin-stack, but the total surface area is about the same. The spacing between the fins is wider than the eXtreme, which should improve performance with low speed fans like the 600 RPM models included with the Silent Edition. In addition there are twice as many of the small tabs on each fin that provide stability and ensure equal spacing.

The Thermalright Venomous X Silent Edition is composed of a copper base, 6 x 6 mm thick copper heatpipes soldered to 47 aluminum fins, and the entire body is also nickel-plated. By our measurements, the heatsink weighs approximately 780 grams and stands 161 mm tall. The included mounting system is the same employed by the Thermalright Silver Arrow. The installation procedure is detailed here. 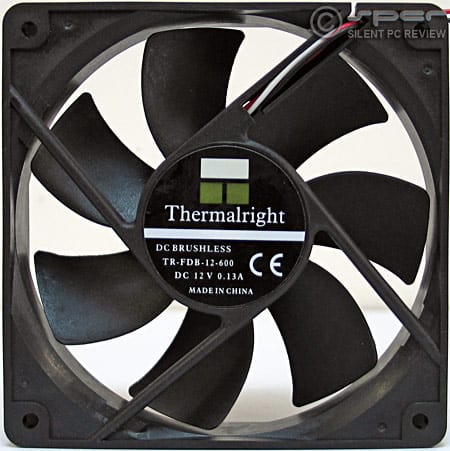 The fans included with the Venomous X Silent Edition use fluid bearings and spin at just 600 RPM. They have a standard seven blade design with gentle curves and straight struts. They weight about 160 grams, which is 40 grams more than most 12 cm models. Much of the extra weight is probably due to the motor as the hub measures an unusually wide 47 mm across.

As for the noise level of the fan, it’s almost nonexistent. When mounted on the heatsink, It produces a slight hum at close proximity but is completely inaudible at one meter’s distance, even at full speed. It barely registered on our sound meter, measuring about half a decibel more than our anechoic chamber’s noise floor. This is about as close to silent as it gets, and undervolting it is pointless unless the fan is going to reside right next to your ear.

With both fans mounted on the heatsink, there was barely any increase in noise level. Running the pair at full speed is slightly quieter than the 12 dBA@1m generated by our reference Nexus 120 mm fan running at just 7V.

With a single stock fan, the Venomous X was a mediocre performer with a thermal rise of 47°C, however this was an impressive result as it was inaudible. Adding the second fan improved cooling by 5°C while barely affecting the overall noise level. Doubling up the stock fans gave us slightly better acoustics and temperatures than our reference Nexus 120 mm fan running at 7V. This too was commendable as the Nexus is the best performing fan we’ve come across.

Using two reference fans resulted in only a 2~3°C improvement but also on emitted 1 dB more using the stock fans, so it’s not a conclusive which combination is superior. Our reference Noctua 140 mm fans actually performed slightly worse, allowing the processor to heat up about 2~3°C more than the Nexus fans at comparable noise levels.

Compared to other large single fan CPU coolers, the Venomous X places a very close second to the Ultra-120 eXtreme Rev.C. Given how similar the heatsinks are constructed, this is not a big surprise. Both coolers are exceptional performers.

Venomous X also puts up a pretty good fight against the dual 14 cm fan monsters, coming close to matching the Noctua NH-D14 when using a pair of our reference 14 cm fans.

Though obviously unable to live up to its “silent” billing, the Thermalright Venomous X Silent Edition comes as close as an CPU heatsink can to this claim without resorting to passive cooling. As the included fans spin at a meager 600 RPM and employ fluid bearings, they are exceedingly quiet, being effectively inaudible even in our anechoic chamber. They also perform surprisingly well on the Venomous X, giving our reference Nexus 120 mm fans a run for their money. We aren’t big proponents of the plastic fan mounts though — the metal clips work just as well and as a bonus, are compatible with most 14 cm fan models. The heatsink itself, being built from the same mold as the Ultra-120 series, has the same superb cooling proficiency as the Ultra-120 eXtreme Rev.C, thanks in no small part to its convex base and sublime mounting system.

If you’re in the market for a potent CPU cooler that is extremely quiet straight out of the box, the Venomous X Silent Edition fits the bill better than any product we’ve tested in recent memory. Our only complaint is the current street price of US$70~$75. Larger, more capable coolers like the Thermalright Silver Arrow and Noctua NH-C14 can be found for about the same amount, though they both require some fan control magic to match the noise output of the Silent Edition. This isn’t necessarily a bad thing as their higher fan speeds also make them more versatile — an 11 dBA cooler afterall is beyond overkill for many users.

Our thanks to Thermalright for the Venomous X Silent Edition heatsink sample.