Thermalright’s XP-90 CPU heatsink, which features four heatpipes, thin aluminum fins and a nickel-plated copper base, was released at the same time as the XP-120. It is essentially an XP-120 shrunk to work with a 92mm fan for those who cannot accommodate a 120mm fan. Amazingly light, a little cheaper, and much easier to install: How does it perform with a quiet fan like the Nexus 92? SPCR puts the XP-90 through its paces and brings you the full monty, complete with high resolution sound files.

Thermalright’s XP-120 recently hit the market with the sort of splash
you’d hope to never see at an Olympic diving competition. Large yet light, with five integrated heatpipes and designed for use with a 120mm fan, the XP-120 broke all previous CPU cooling records in our recent review. The smaller XP-90 was released at the
same time with less fanfare, and the new XP models have been dubbed Light ‘n’ Easy, an obvious reference to the low weight and ease of cooling offered. New HS developments are almost always tied to increases in CPU thermal output. The stimulus here was obviously the Intel Prescott core P4s, many of which far exceed 100W heat dissipation.

Thermalright broke with their own tradition with the XP series in using aluminum fins bonded to a nickel-plated
copper base. The last time they used this combination successfully was nearly three years ago with the AX478. (The more recent ALX800 was not so successful and did not use nickel plating on the base.) Heatpipes did not figure in that model, however. The last of their top models (SP94, SP97) featured all-copper construction, thin fins and heatpipes. They’ve been heavy, reaching ~600g without a fan. In contrast, the XP-90 rings in at
a mere 360 grams, yet, remarkably, this is only 10 grams shy of the XP-120’s
weight!

The change in design strategy is clear:

These changes have the effect of increasing cooling efficiency to deal with those burning hot Prescotts without stressing the motherboard with high mass or increased fan noise. It’s a pretty smart approach.

The XP-90 comes in Thermaright’s usual sturdy brown carton, whose contents includes a replacement retention frame for K8 boards that allows the standard P4 clips on the HS to be used, just as in the XP-120.

The base
of XP-90 is a quarter-inch thick slab of copper, very well machined and nickel-plated
to an almost mirror-like sheen. The aluminum fins appear to be directly soldered to the base. The fins have a very steep vertical rise
from the base to clear any tall mainboard
components near the socket. The heatpipes run from the base to the sides of the top portion of the fins. 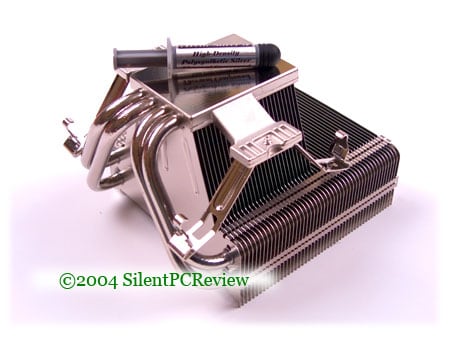 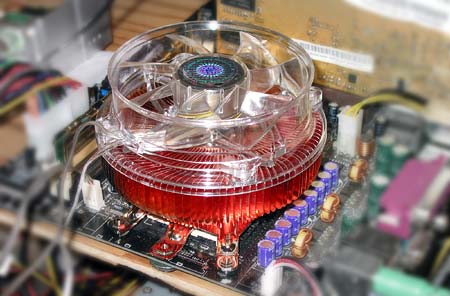 Installed: Clearance was not an issue with the test bed. 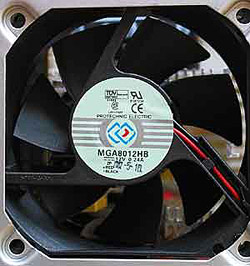 Fan mounts via clips that notch to the frame, like
on the XP-120.

XP-90 offers two sets of clips for mounting
either an 80mm or a 92mm fan. Thermalright assures us that cooling is the same with the fan blowing up or down. The
vibration dampening strips were utilized during the test. Like the XP-120,
the clips included with XP-90 hook to the lower
flange of the fan, rather than the upper flange.
No fan was included, as is the norm for a Thermalright HS.

Even though the HS clips to the stock retention bracket
in a conventional way, it is still best to lay a tower case system on its side. It takes
a lot of force to get the clips engaged. This can be done without removing the mainboard from the case — although for K8, the stock retention bracket must be replaced, which means motherboard removal.
Start by engaging the clips under
the high portion of the fins, and then hook the clips near the heatpipes. This is much easier to do than on the XP-120, whose large fins completely block easy access to all four clips. 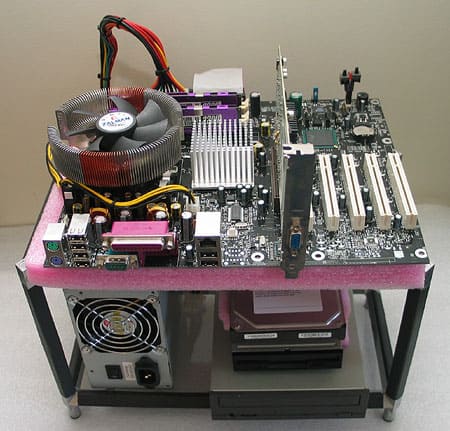 The P4 HS test platform is an open system not enclosed in a case.

The heatsink was cleaned and installed on the test system as per the manufacturer’s
and Arctic Silver’s instructions. Prime95 was then run for 8 hours to verify
system stability and cure the Ceramique. The system was then shut down and not
restarted until the next morning when the actual testing was done. The system
was allowed to cool between tests for 30 minutes. Each test was run for 30 minutes
even though all temperatures generally stabilized within 15 to 20 minutes.

The tests were run three times on consecutive mornings to check to
the consistency of the results. All results were within 1-2°C of each other
and the average readings are included in the charts.

* All temperatures in degrees Celsius.
* Diode: Reading from P4-2.4C CPU diode via Motherboard Monitor.
* Temp Rise refers to the difference between ambient temperature and
the diode reading at maximum load.
* °C/W refers to the °C of temperature rise per watt of heat
dissipated by the CPU.

The following notes apply to all the temperature tables:
°C rise refers to the rise in
temperature over the ambient at load.
°C/W – TDP calculations:
Intel’s TDP of 66W was used.
°C/W – MP calculations: CPU
Heat& CPUMSR Projects’ estimate of 75W was used.

With the Panaflo 92L fan, the cooling performance of the XP-90 is in champion territory. It doesn’t quite match the performance of the larger XP-120 with a larger 120mm fan, but it comes so very close. That it manages to do this with a fan that is so much smaller is a clear testament to the cooling efficiency of the design. However, the noise of the Panaflo 92L at 12V leaves much to be desired; it is hardly what most SPCR enthusiasts would accept for their own PCs.

Cooling performance with the slower and quieter Nexus 92mm and Panaflo 80L fans is still very good. The performance is virtually identical despite the different sizes. The only explanation we can think of is that the larger diameter of the Nexus 92mm fan is offset by its lower CFM. Note that the measured CFM on the Panaflo 80L is significantly higher than for the Nexus 92, and higher than what Panasonic cites. It is also 4 dBA/1m louder than the Nexus 92 at this voltage.

Performance in our test platform with the fans blowing down is slightly better than blowing up, contrary to Thermalright’s claim that it is the same.

The 20 dBA/1m of the Nexus 92 may be quiet enough for many people, but naturally SPCR reader want even quieter. And this cooler has plenty of cooling headroom to reduce the fan speed and noise.

Performance at 7V remains excellent with the Panaflo 92L, which is actually still better than with the other two fans at 12V. Its noise, though greatly reduced, is still somewhat more intrusive than most SPCR enthusiasts would like, with some clicking and buzzing issues. Both of the other fans will be essentially inaudible inside a typical quiet PC, and they still provide quite good cooling.

The Panaflo 92L is still going strong at this voltage, but again the noise is not as good as either the Nexus 92 or Panaflo 80L even at 7V. The Nexus 92 and Panaflo 80L are at about the borderline of thermal prudence at this voltage. Inside a case with ambient temps at least 10°C higher, the CPU temp would be in the low 60s. This is still safe, but it does not leave as much headroom for hot weather or other extreme conditions. Still, it is the best performance we’ve encountered with any heatsink running the Panaflo 80L at 5V.

Finally, a quick comparison against a couple of obvious competitors at similar noise levels.

Thermalright has a winner in the XP-90. The only HS that can clearly best it is Thermalright’s own much larger XP-120 with a much larger fan. Yet it will probably fit nicely without problems on the vast majority of motherboards in conventional ATX cases, and it even works well with a Panaflo 80L fan at low speed. It does all this without any serious weight penalty; with a 92mm fan, it should easily fall within the 450 grams maximum HSF mass recommended by Intel.

What’s not to like? About the only thing we can think of is the high pressure on the clips and maybe the absence of a quiet fan packaged with the XP-90 at an attractive combo price. Plus, if your system can accommodate the XP-120, it would still be the preferred performance choice. But these are trivialities we have to scratch around for so as to look not overly enthusiastic. With the XP series, Thermalright has raised the bar for heatpipe-equipped CPU coolers.

Many thanks to JAB-tech and Thermalright for the XP-90 samples.

Discuss this article in the SPCR Forum.