Thermaltake’s entry into the fanless PSU sweepstakes features not only a heavy external casing but heatpipes and external copper fins borrowed from one of their heatsinks. No 24-pin ATX, but SATA connectors; no PFC but high efficiency.

A Fanless ATX power supply is still rare enough to merit close attention at SPCR. The reason for its existence is to power a computer without introducing any noise of its own, so the target market dovetails perfectly with SPCR’s audience. No wonder these fanless samples keep coming our way.

Many brands offer them now, but usually just a single model. Most designs take the approach of maximizing passive cooling by turning the entire PSU casing into a massive heatsink. The Antec Phantom 350 and the Coolmax Taurus are are good examples of this approach. The Silverstone ST30NF / Etasis EFN30 combine this approach with heatpipes that transfer the heat from the hottest components to the back of the external casing.

Trust Thermaltake to take this idea and go over the top with
it: The Fanless Purepower 350 adds a stack of thin copper fins at the end of
two heatpipes, and positions these cooling fins on the back of the PSU, outside
the case. The idea is for the heatpipes to wick the heat to the external fins,
and for the fins to dissipate the heat via convection outside the case. It’s
a good concept for a silent PSU, at least on the face of it. 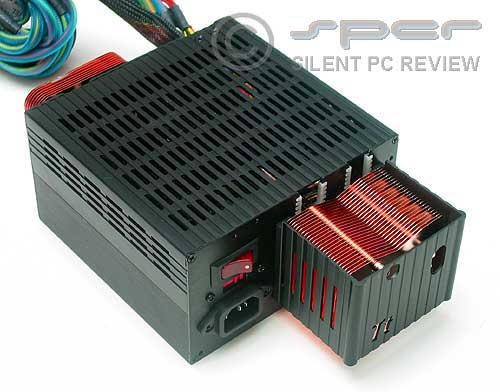 Now that I’ve got completely ahead of myself, let’s back up a bit and give you the introductory basics for this power supply. As you may be aware, Thermaltake does not make its own PSUs. This applies to many of the brands in the industry that have suddenly begun offering PSUs in the past year or two. The PSUs are made to spec by one of the big PSU makers, then packaged up for Thermaltake to market and distribute. Thermaltake does have a big distribution network established over many years in the PC accessories and peripherals business, so their reach is extensive. They have… a certain marketing style. 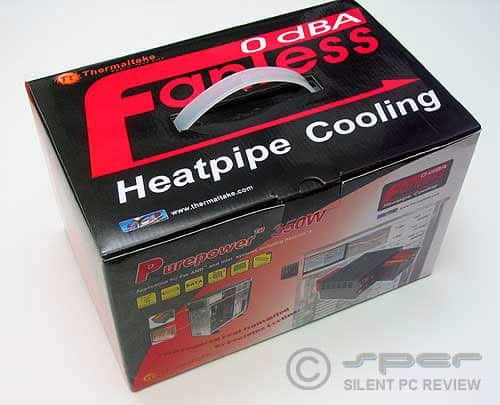 Another big carry-handle box for this PSU. 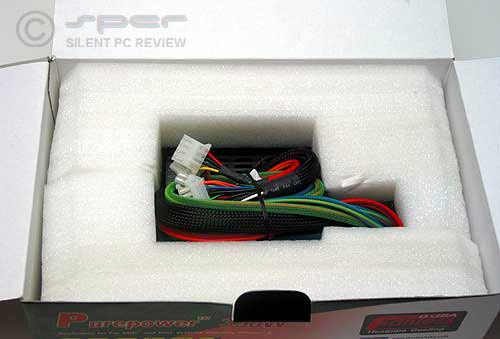 The product requires a lot of packing material as the external HS
are quite exposed to damage from shock.
We know: Our first sample came with the inside heatpiped copper heatsinks rattling
about from something breaking loose in transit. 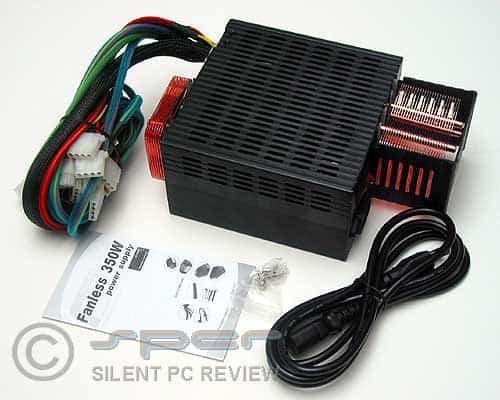 The contents: The PSU, AC cable, mounting screws and a user’s manual. 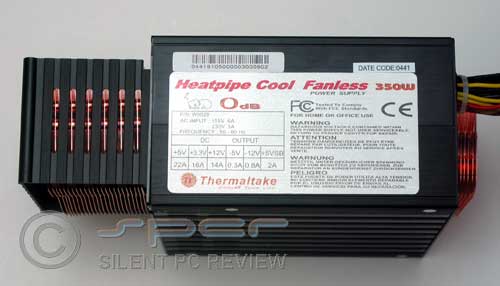 Proper documentation turned out to be a serious issue with this product. There was no one place that contained all the technical specifications one normally sees grouped together.

There was the question of compliance with any version of Intel’s industry setting ATX12V PSU design guide. It is certainly not the current V2.01. One would think if it was compliant with even V1.3, the previous major version of ATX12V, this would be indicated. Theree was nothing on the product box, manual, or product sticker to indicate any kind of ATX12V guid compliance. Neither was it on the main product page. A reader pointed out that the W0029 was grouped in a listing of ATX12V v1.3 PSUs on Thermaltake’s web site. This is not good.

Another oddity is that there are only two certifying marks mentioned on the PSU label: FCC and CE. There is no CSA or UL safety approval mark, unlike all the PSUs we’ve reviewed as far back as I can recall. This seemed just too far off the mark so I did a search on their web site, the manual, the rest of the PSU, and finally the retail box. At the bottom edge of one side of the box, there are four logos for UL (combined US & Canada), TUV (German), FCC (for EMI), and CE (for EU, mostly for EMI). It is the only place where all these certifications are shown. This is not good either.

The main casing is a bit reminiscent of the Coolmax Taurus in basic look and finish. Of course, the copper external heatsinks are quite unique. They looks as if they were pulled off a CPU heatsink. 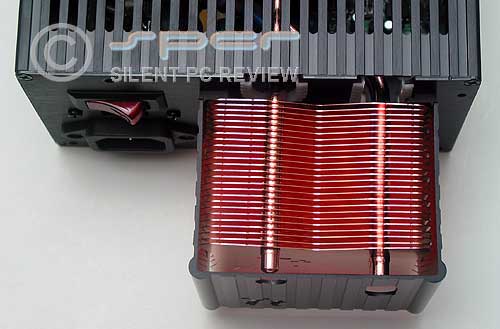 Three heatpipes run through the external copper fins. The black anodized
aluminum “surround” provides protection from shock.
The design is meant to take advantage of rising air passing through the fins
for convection cooling. 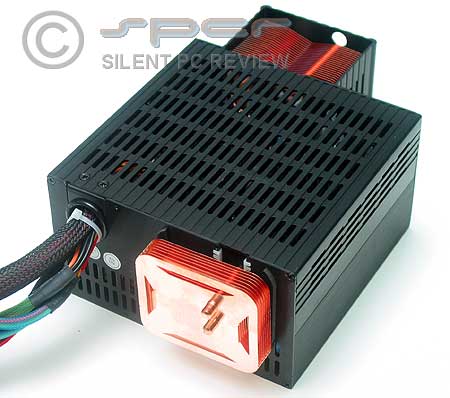 The inside of the unit also sports copper fins, a smaller set, connected
to two heatpipes.

An important structural note: Both sets of external copper heatsinks make physical contact only with the heatpipes. They are not secured to the PSU in any other way. This is necessary for proper thermal transfer between heatpipes and fins. However, it does mean that there is a fair amount of cantilever force at the inside end of the external heatpipes, because that big stack of copper fins represents a fair mass at the outside end. This is why the 3-sided protective surround is necessary for the outside copper fins. It also means that rough treatment in transit such as a 4~6 foot drop could be enough force to break something loose, as it did for smaller set of copper fins in the first sample. 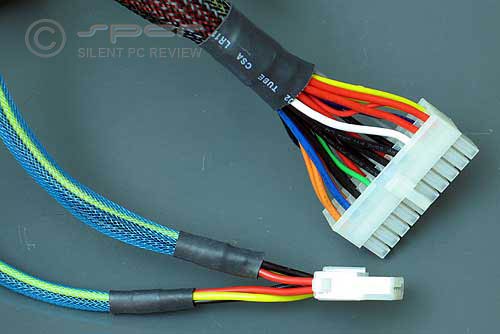 The cables are nicely done, with tidy mesh sleeving over all the cables.

The cables are fairly long, and there is an extensive collection of connectors.

There are a total of six cable sets.

The outer casing is in four parts: The rectangular front and back plates, and the top and bottom C-profile covers. It’s all made of the same anodized aluminum, probably an extrusion for the top and bottom. It is not particular hefty, but thicker than the skin of aluminum cases. Two large black heatsinks dominate over the PCB. Not much is visible beneath the big tops of the black heatsinks. 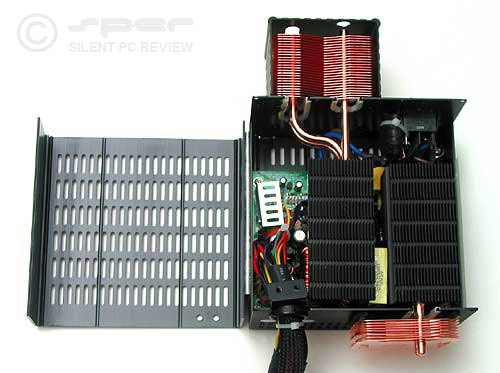 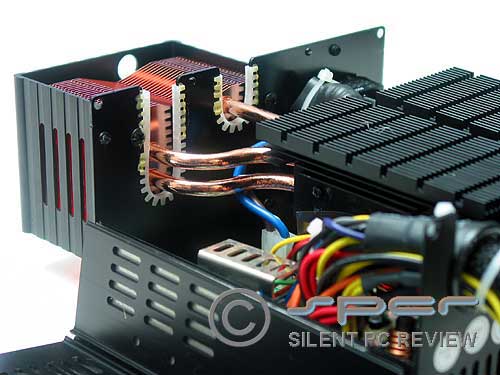 The interface between the copper fins and the heatpipes. 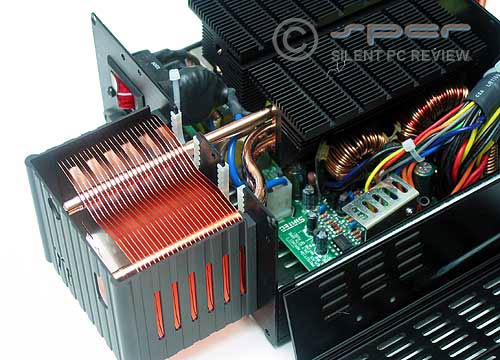 The three heatpipes all come from the same middle heatsink, which presumably
cools the components that produce the most heat. 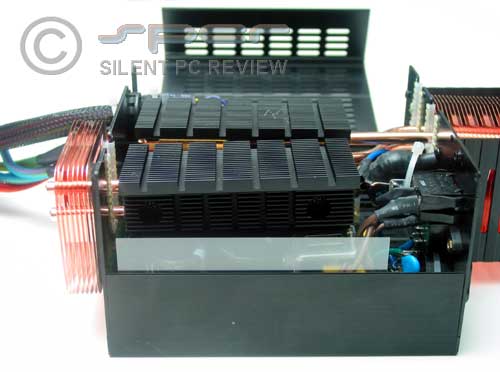 The smaller set of copper fins on the other side are heatpiped to the other
HS.
If it looks crooked, that’s because it is. This is a pic of the first PSU sample,
and this is the HS set that partly broke loose from the PCB.

For a complete rundown of testing equipment and procedures, please refer to the
article
SPCR’s Revised PSU Testing System. It is a close simulation of a
moderate airflow mid-tower PC optimized for low noise. 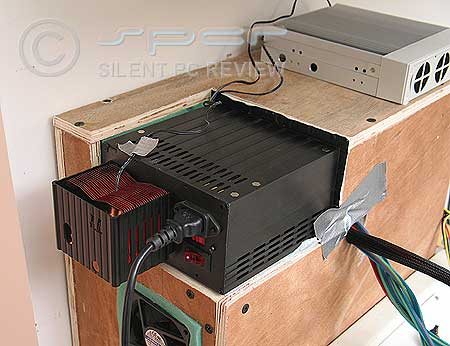 In the test rig, the ambient temperature of the PSU varies proportionately with
its actual output load, which is exactly the way it is in a real PC
environment. But there is the added benefit of a precise high power load tester
which allows incremental load testing all the way to full power for any
non-industrial PC power supply. Both fan noise and voltage are measured at
various loads. It is, in general, a very demanding test, as the operating
ambient temperature of the PSU often reaches 40°C or more at full power.
This is impossible to achieve with an open test bench setup.

Great effort has been made to devise as realistic an operating environment
for the PSU as possible, but the thermal and noise results obtained here still
cannot be considered absolute. There are far to many variables in PCs and far
too many possible combinations of components for any single test environment
to provide infallible results. And there is always the bugaboo of sample variance.
These results are akin to a resume, a few detailed photographs, and some short
sound bites of someone you’ve never met. You’ll probably get a reasonably good
overall impression of that person, but it is not quite the same as an extended
meeting in person.

The sample worked mostly without any noise at lower power loads. There was a bit of buzzing (6~700 Hz) at some loads, but it was modest, somewhat dependent on the precise mix of loads on the various lines, and not audible from more than a couple foot away. The buzzing got louder at >250W output, and in an otherwise quiet system, it might get loud to be an annoyance.

Full rated power could not be reached. The unit exhibited current overload when asked to deliver 350W, with the load set precisely to the maximum for each voltage line. The PSU did not power down, however. Whether the reduced AC current draw is an indication of current clamping is not clear; the few PSUs I’ve managed to overload by trying to draw too much power have shut down outright. With this kind of reduced output behavior, the PC demanding such power from this PSU would most likely crash or exhibit some other serious instability.

The PSU was left at the maximum power load for less than ~5 minutes. There was no point to making it burn.

1. VOLTAGE REGULATION stayed within published parameters up to the 300W load. The low and high voltages seen on each of the main lines are shown:

When the 350W load was dialed in, voltages fell significantly below their norms:

2. EFFICIENCY was very good. In fact, given the possible 2-3 year old circuit being used here, the efficiency figures we obtained are downright amazing. It made us double check our results with two different power meters. For most of the range in which this power
supply is likely to be used, efficiency remained between 74~81%. The 84% efficiency reached at 300W is excellent, although by this time, the buzzing noise probably makes the unit less useful.

3. POWER FACTOR was typical for a unit without PF correction, with a range
between 0.63~0.67, increasing with power output.

4. COOLING: A cursory glance at the “intake” and external PSU heatsink temperature rows in the test result table is enough to tell us that the heatpipes and copper fins work as intended. They wick the heat efficiently from the hottest portions of the PSU out to the copper fins. It doesn’t tell us how well the copper fins “sink” the heat into the air. Given the high temps, perhaps not well enough. Admittedly, we lack the resources to full analyze the meaning of these temps. Suffice it to say that during several days of testing, the PSU never shut down even when the fin temperature approached 80°C.

The Thermaltake Fanless Purepower 350 model W0029 is an interesting power supply. It has high efficiency and seems to work well in the power range of interest to most quiet PC users. It’s silent at low power. There is some buzzing noise that can get intrusive at high power levels, but it’s unlikely that this PSU would be used in a system that calls for such power for any length of time.

The unit does not offer PCIe video card support, nor does it come with a 24-pin ATX main connector, which is best for PCIe boards. SLI is not even a consideration with its modest power output capability.

The 350W rating is obviously not right. 300W is the realistic maximum power capability of this unit.

The cooling system appears to work well, but ultimately, whether the design provides good enough cooling for its internal components can only be judged by widespread use over time. The lack of compliance with the ATX12V v2.0 Design Guide is disappointing, especially given the price.

Ultimately, we’re going to sit on the fence dithering and say we’re not sure that we recommend it. We’re more comfortable with a Silverstone or Antec Phantom fanless PSU. This Thermaltake would probably work well in a low power (<150W DC) minimalist system for a user who understands thermal issues around fanless PSUs. For more general users, it’s not as safe a choice.

Much thanks to Thermaltake for the opportunity to examine this power supply.