The Titan Fenrir and Cooler Master Hyper 212 Plus are CPU heatsinks with direct touch/contact heatpipes. The Fenrir with its thicker heatpipes and larger body seems to have the advantage, but the slimmer Hyper 212 Plus may be the David to its Goliath.

For the past 5 years, the highest performing air cooled CPU heatsinks have
all been based on a heatpipe/tower design. Manufacturers have experimented with
the shape, fin spacing, number of heatpipes and nickel plating, but nothing
fundamental has changed since their debut except for direct touch heatpipes.
Direct touch involves flattening the heatpipes at the bottom of the heatsink
and having them form the actual base rather than an intermediary material (usually
a copper plate) to transfer the heat from the CPU and pass it onto the heatpipes.

The first direct touch coolers we tested, the
Xigmatek HDT-S1283 and HDT-SD964 were very strong performers even though
they were significantly smaller than the competition. Since then the technology
has become more common with bigger companies like OCZ and Cooler Master adopting
it in many of their heatsinks. Given their rising popularity, we felt it apt
to investigate a pair of more recent models, the Titan Fenrir and the Cooler
Master Hyper 212 Plus.

If you are unfamiliar with Titan, we don’t blame you as they are mainly an
OEM cooling solution provider. They are much smaller in the retail space and
Titan branded products are not well-known in North America. The name “Fenrir”
is that of a fierce wolf hailing from ancient Norse mythology; it’s an apt moniker
for this formidable-looking CPU heatsink.

Typically we do not take time to discuss a product’s packaging, but we would
be doing a great disservice not to mention that the Fenrir ships in one of those
loathsome sealed plastic clamshell containers that are notoriously difficult
to open.

Inside is more plastic in the form of two trays holding the heatsink and an
attention-seeking chrome-painted 120 mm fan. The standard Fenrir has blasé
silver/gray fins, but our sample was an “X’Mas Edition” with fins
painted blood red and pitch black, a far-from-festive color scheme. Titan is
based in Taiwan, which has a little known, but incredibly macabre Christmas
tradition. A white box holds the mounting hardware, thermal compound, fan clips,
and a 4-pin PWM to 3-pin adapter with an in-line resistor to slow down the fan.
The Fenrir supports all of Intel’s current desktop sockets, but the package
lacks a backplate for LGA1156.

Cooler Master is a PC hardware giant that requires little introduction. The
brand has a wide array of cooling solutions, but its heatsinks have generally
fared rather poorly in the past in our tests. The Hyper 212 Plus heatsink hopes
to reverse this trend, though it seems to be at a disadvantage compared to the
Fenrir. Its body is much thinner and the heatpipes aren’t as thick, 6 mm vs.
8 mm. The original Hyper 212 has a traditional copper base but looks very similar
to the Plus — be careful not to mix up the two.

Cooler Master’s packaging is more economical and environmentally friendly
than the Fenrir’s, though we would prefer if it had no plastic at all. Along
with the mounting hardware that accommodates all current AMD and Intel sockets,
there are brackets, pads, and screws to mount a second fan. Note that our sample’s
model number is RR-B10-212P-G1; there is a second version, the RR-B10-212P-GP
that uses wire clips to mount the fan, and it does not come with a second set
of wire clips. 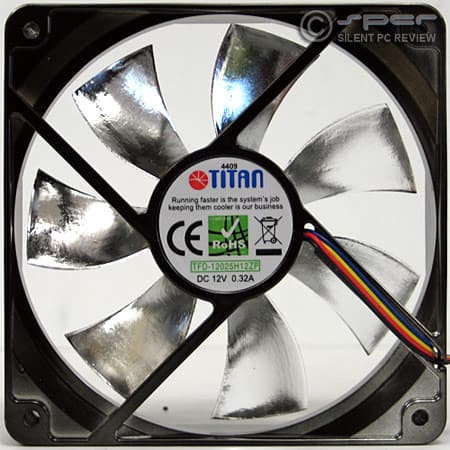 The stock fan, despite its chrome painted blades, looks a bit on the anemic

side. The blades are small, particularly near the hub, and don’t have much curvature.
The specifications list multiple bearing types, though the “Z” in
the model number suggests it uses a mysterious bearing type called “Z-Axis.”

The Fenrir’s stock fan whines and buzzes terribly at full speed, but thankfully
it undervolts well. At 9V, the noise level is still unbearable but it sounds
much smoother and noticeably less whiny. At 7V it begins to hum slightly, but
this too dissipates as the fan speed is turned down. At 6V and below, it is
very smooth and quiet.

For users with motherboards that do not control the fan speed, PWM or otherwise,
there is an included 4-pin to 3-pin adapter that can be used to slow the fan
to about 1130 RPM, or the equivalent of 7V. It’s not enough to make the fan
quiet by SPCR standards, but it’s better than nothing. 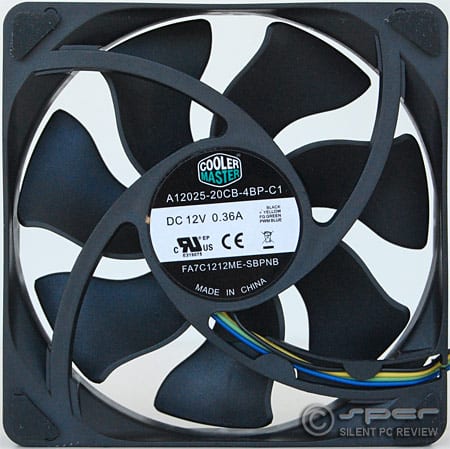 hub, and twisted blades. Though the model number is not the same, it appears
to be the Blade
Master 120 mm fan, as the appearance and specifications are identical.

Like most stock fans, the Blade Master is loud and turbulent at full speed.
It is very buzzy at 10V, and generates an audible hum as well as bearing chatter
at 9V. It becomes quiet at about 8V, though its acoustic character remains the
same as at 9V. At 7V it is effectively inaudible at one meter, but at closer
distances it continues to hum in a fluttery manner as if the fan is slightly
off-balance.

At reasonable noise levels, the thermal rise for the Fenrir was between 43
and 47°C which is a tad on the high side. Our reference Nexus fan fared
much better, generating the same CPU temperature at 12V/16 dBA as the stock
fan at 7V/21 dBA. At 9V, it was 1°C cooler and 1~2 dBA quieter than the
Fenrir fan at 5V.

The Hyper 212 Plus was the more proficient cooler of the two, running 3~4°C
cooler than the Fenrir at equivalent or lower noise levels. However, when the
airflow was reduced to very low levels, the temperature skyrocketed. At 7V,
the CPU was operating 10°C hotter than at 8V, despite only a 1 dB drop in
SPL. The Hyper 212 Plus’ extremely tight fin spacing is likely to blame, though
it should be noted our reference fan suffered only a 4°C reduction in cooling
efficiency at equivalent levels.

The Hyper 212 Plus is in good company, landing right between two former champions,
the Thermalright Ultra-120
and eXtreme, and
only 3~4°C from the current leader, the Prolimatech
Megahalems. The Fenrir is no slouch either, trailing the Cooler Master
by only a couple of degrees, but it’s a huge disappointing result when you consider
the Fenrir’s size. It should outperform the Hyper 212 Plus, with bigger
heatpipes and larger fins, but it just doesn’t.

The X’Mas edition of the Titan Fenrir looks like a formidable CPU cooler with
a morbid red and black paint job, shiny stock fan, and fat direct-touch heatpipes,
but its bark is much bigger than its bite. It has a decent sounding fan that
undervolts well, but its performance is somewhat lacking compared to the competition.
Its biggest problem seems to be a mounting system that doesn’t apply enough
pressure. The thickness of its fin may also harm cooling efficiency with a low
speed fa. The thick heatpipes don’t make full contact with the CPU heatspreader,
though we’re not sure if two halves of a heatpipe are better or worse than one
full heatpipe when it comes to thermal conduction. In addition, the fan blows
upwards when installed on AMD motherboards, and the package lacks a backplate
for LGA1156. Thankfully the Fenrir is not particularly expensive by modern standards,
retailing for US$50, though compared to the Hyper 212 Plus, its value is decidedly
poor.

The Cooler Master Hyper 212 Plus, despite being lighter, thinner, and having
smaller heatpipes, is a better overall heatsink than the Fenrir. The mounting
system is clever, requiring only one set of hardware for all sockets, and installs
on AMD boards in the ‘proper’ orientation with the fan blowing east-west. We
believe the superior mount also gives it an edge in performance, though only
in the range of 2~3°C on our test setup. While the stock fan is acoustically
poor, the cost of replacing the fan is acceptable when you consider the Hyper
212 Plus can be found for a shade under US$30 at various online shops. It even
ships with a second set of fan brackets, something many pricier coolers lack.
The Hyper 212 Plus is difficult to beat for value; it’s one of the most cost-effective
CPU heatsinks we’ve tested to date.