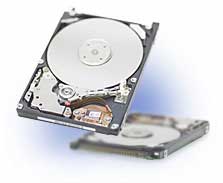 Reviewed today is the MK6022GAX, the highest performance notebook drive in Toshiba‘s lineup: A 5400 RPM, 2.5" drive with 16 mb of cache. It surely performs, but does it plumb the sub-20 dBA depths or remain in more audible >20 dBA territory? Here’s our acoustic report on the Toshiba MK6022GAX.

This article is a continuation of our effort to identify quiet notebook drives, a process begun with the March 2004 article Is the Silent PC Future 2.5-inches wide? In that article, three notebook drives were assessed for noise, along with two 3.5″ reference standards for SPCR.

The drive being examined today is the MK6022GAX, about the highest performance 2.5″ drive in Toshiba‘s lineup. From Toshiba America’s web site:

The MK6022GAX offers the industries highest areal density per platter, at 49.8 gigabits per square inch. The drive’s 5400 RPM motor speed, improves system-level performance by as much as 12 percent when compared to 4200 RPM drives.

This new drive offers enough capacity for portable video recording and editing, with lower power consumption compared to the traditional 3.5-inch HDDs. This functionality provides ideal storage for a range of commercial and consumer notebooks, as well as non-PC applications such as PDAs, printers, copiers, GPS systems and MP3 players. The MK6022GAX is ATA-5 compliant, supporting high transfer rates of up to 100 megabytes per second.

Sorry for the generic image; my camera’s CF card memory somehow got corrupted…
They all look pretty much the same anyway. Like this: 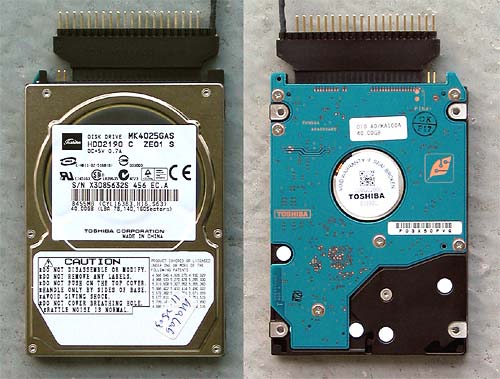 Unfortunately, no noise specifications are given for this drive.

Here is a summary of this drive, compared to the other drives reviewed in the first 2.5″ drive article.

As in the previous acoustic testing, the drive was placed bare, one by one, on a small light side table that stands about 18″ off the carpeted floor. The room is basically an ordinary living room that measures 20 x 10 feet, with an 8′ ceiling and acoustics that represents a balance between very lively and completely damped. An IDE drive adapter was used to power each drive with a fanless PSU.

This professional caliber SLM dates back to 1978, weighs over 10 pounds, and is completely analog in design. It has a dynamic range that spans over 140 dB. The microphone has a 1″ diaphragm that’s very responsive to low sound levels and low frequencies. The unit’s absolute sensitivity reaches below 0 dBA: I have seen it read -4 dBA in the midband (1kHz) for background noise in an anechoic chamber.

The drive was placed on its side, leaning a bit against a heavy thick dictionary to keep it stable. The microphone of the SLM was placed 1 meter away, at the same height as the drive so that it read directly off the large top surface of the drive. If the HDD is allowed to rest flat on the table, and present its side edge to the mic of the SLM, the noise actually drops 1~2 dBA.

The measurements were conducted after midnight on a weekday. The room ambient with no noise sources in the room (other than my breathing a few feet from the test mic) was ~14 dBA.

Only the idle noise was measured, but as I plugged the into an operational PC for listening and general use, I can comment on the subjective noise.

It’s too bad that a sample of the Seagate Momentus was not on hand. While the Toshiba MK6022GAX was clearly quieter that the Momentus, the question of the performance difference between the two would have been good to address. With 16 MB cache, the Toshiba would surely have been the winner.

The inconsistent results obtained with benchmark tests seemed to suggest that the Toshiba is faster than even an IBM/Hitachi 180GXP 120G 7200 RPM 8MB cache 3.5″ drive. I was not prepared to accept this result; the IBM is a very speedy drive, still tops among 3.5″ 7200RPM drives. So it’s back to the drawing board with performance benchmarks for now.

Still, this Toshiba is clearly a fast drive. With the boost of its 16 MB cache, performance is probably at least at the level of standard 3.5″ 7200 RPM drives. The level of noise and vibration are both very low, probably lower than most noise sources you are likely to have in your PC. Some creative noise damping and elastic suspension should get you down to the noise level of the 4200 rpm 2.5″ drives fairly easily, especially since the heat output is still very low.

FrontrierPC’s price on this drive (as I write) is CA$211, which is about US$160. Not low for a 60G drive in general, but not bad if a super low noise but still fast drive is your goal, because there is much less effort and expense needed to silence it compared to 3.5″ 7200 rpm drives. It looks like a worthwhile option to me.

Much thanks to FrontierPC for the loan of the notebook hard drives.