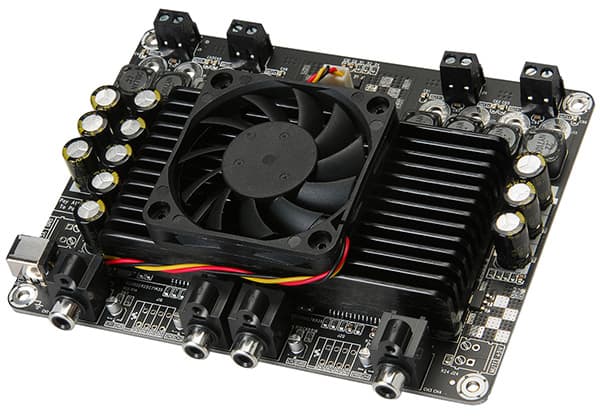 A show-and-tell about two amplifier projects: A DIY custom assembly of an 8x100W class-D amp and the restoration of a classic 1980 Harman/Kardon HK770 dual-mono power amp with complete replacement of all 44 capacitors.

This is a show-and-tell about two amplifiers I worked on in the past year.
One is a DIY custom assembly of class-D amp modules and an SMPS PSU into an
8-channel power amp in a single chassis. The other is the restoration of a classic
1980 Harman/Kardon HK770 dual-mono power amp with complete replacement of all
44 capacitors.

A 40w/ch @ 8-ohms 8-ch Rotel RMB1048 amplifiers has been the power amp for my
Linkwitz Orion speakers since I built the speakers in spring 2014. The electronics
of the system live in a custom shelving unit I built into the fireplace in my
living room. The Rotel amp is a bit too deep to fit fully into this space, and
it’s always annoyed me that the front portion sticks out beyond the fireplace
by a good size inches or so.

I’d read about class-D amp modules based on single chips, some that actually
contain 4 channels on a single module. One active DIY speaker enthusiast in
Australia, gainphile,
described building an 8-channel amp from two such modules on his blog. These
were to drive his Orion-inspired active crossover 4-way speaker system. I examined
what he did, based on his blog, and his comments about them, and decided that
perhaps something similar could replace the over-sized Rotel amp.

After much scouring the web and ebay, two "4x100W" STA508 amp modules
by Sure Electronics and two 24V 14.6A 350W switching power supply were ordered.
Two different sized aluminum cases were chosen and ordered as well. I chose
two different sized ones just so I’d have options. The amp and power supply
modules are very similar to those chosen by gainphile. The STA508 is
based on two TC2000 and four TP2050 chips from Tripath, a leading class-D chip
maker.

First examination and power up proved immediately that the small fan on the
STA508 amp module is too noisy for me. I’d replace them with high quality 80mm
Noctua fans, loaded down to spin at ~500rpm. At that speed, they are inaudible
in a quiet room till you get to within 1-2 ft, then it is a soft, barely audible
whirr. With music playing, this would be a complete non-issue.

The fan in the PSUs had to go as well, of course, but this was a harder nut
to crack because of the tight space in the PSU casing and the tiny size of the
fan. I took the PSU apart, examined the parts that needed cooling, and then
decided that I could devise a way to clamp those parts to the chassis front
and side panels for effective passive cooling.

I read more of the notes on the gainphile
blog. He could not hear the difference between running his amp modules on one
or two PSUs. I rigged up the amp temporarily into my Orion system, and did the
comparison myself. It was not a particularly rigorous comparison, but I was
satisfied that the sonic difference between one PSU and two wasn’t audible to
me. I would go with one PSU.

It all got done, and the final assembled amp worked AOK. All the wiring inside
is soldered except for the speaker terminals at the amps, and the DC power output
at the PSU, for which I used the existing screw terminals. My soldering skills
are good, not the most elegant looking joins, but solid.

The amp took me some 10 days to build. A big part of the work was the metal
work on the enclosure, always a pain with thick panels. I’m not an expert metal worker, so I took
it slow… but still made some minor errors.

I adjusted the supply voltage to just under 27V, about 1.5~2V less than the
maximum recommended for the amp modules. The most realistic power output spec
for the amp is 64W @ 4ohm, 1% THD+N; this probably translates to around 40~50W
@ 8 ohms. Hence, it makes sense that with music, two of these amps are highly
unlikely to draw more than the 15A the PSU can deliver, which is why neither
gainphile nor I could hear any difference when the power supply was doubled.

This amp ran my self-built Linkwitz Orion 3 speaker system for about a month.
The Rotel RM1048 used before is a good amp rated for 40W/ch @ 8 ohms and 65W@4
ohms. The DIY class-D amp matched the Rotel for sound quality, loudness, and
punch, but occupied less than half the space. That’s what I was looking for:
A similar amp in a much smaller package to fit nicely in my living room. The
best thing was that the total cost, even including shipping and import tariffs,
was only under US$200. OK, add the cost of the Noctua fans and it exceeds $200.
Still, it is an incredible bargain!

Despite the amp’s good performance, I decided that I wanted higher maximum
loudness capability, some 4-6 dB higher, which the speakers can probably produce,
but only if driven by amps capable of at least 4X higher power. Perhaps 250W
or more for the bass drivers and at least 100W for the midrange drivers.

This amp plays the Orions plenty loud enough in my 14×30′ LR. I measured ~97
dB peak SPLs at full tilt from 10′ away. But in warm weather, I like to have
the music on while lounging on the back deck with the French doors open, and
that’s another 25′ away, through the kitchen, through a double door opening
in a dividing wall. I know driving the Orions to near max capability from >50′
away is not exactly the most efficient way to get good sound out on the deck,
but I’m not prepared yet to install speakers on the deck.

So this 8x100W amp was sold on ebay to a happy buyer who said "Impressive
little machine. If he builds another I would buy 🙂 "

Notes: The IEC AC socket was fused with a 6A slow blow, though
there is another 6.5A fuse in the PSU. The steel (?) mesh grill is affixed with
double-sided carpet tape, which is really strong, but I added a single sided
adhesive tape around the edges to be safe. The carpet tape + silicone glue would
make it even more permanent. Input sensitivity is quite high; it only takes
520mV at the input (10k ohm impedance) for full output, so this might be best
padded down depending on the output of your gear. A 50k pot is recommended for
this purpose, but I’d calculate and use the right value resistors for better
performance.

Harman / Kardon was still a significant force in quality consumer
audio in the 1970s and ’80s. The Citation series, which originated in the days of stereo
tube amplfiers, had been revived in 1970 with the Citation 12 dual-mono power
amp, and the matching Citation 11 preamp. A few Citation-branded models appeared
through the ’70s and ’80s, including big brutes like the 250W/ch Citation XX. Ultrawide
bandwidth was HK’s anthem of the day, and the 700 series was launched in 1980,
featuring much of the same philosophy and technologies as the Citations in a
more affordable series.

The HK770, according to The
Vintage Knob, was…

"a dual-mono symmetrical DC circuit design with dual quad differential
cascode, two toroidal transformers, discrete components only (no ICs), protection
circuit which remain out of the signal path and 250Khz of frequency response.

"As sternly touted by Dr Matti Otala himself in Japan over dozens of
ads and articles, T.I.M. and I.I.M. were the real enemies and nothing else.
T.I.M. stands for Transient Intermodulation Distortion, a nasty one that stems
out of excessive use of negative feedback and results from increased I.I.M.
(Interface Intermodulation Distortion) – all from the excessive use of NFB
[negative feedback] to reduce said distortion!

"According to H/K, TIM is ten times more audible than THD and can be
detected at leveles as low as 0.03%"

This model was sold in a retail audio store where I once worked. Some time
in 2015, I came across a pristine sample locally in Vancouver, and couldn’t
resist taking this beauty off the hands of the original owner.

A close look at the thoroughly complete specifications tells you that this
was a product engineered for a technically demanding audience. No fluff about
musicality or PRAT here!

As nice as it looked on the outside, when it was hooked up and listened to
the first time, a slight buzzing was apparent on one channel. This seemed a
tell-tale sign. An amplifier some 34~35 years old making a little buzzing: If
this wasn’t a sign of degraded electrolytic capacitors, I’d eat my hat.

When opened up, there were signs inside of heat-related damage, the most obvious
of which were on the underside of the power circuit boards.

I located a service
manual for the HK770 at The HiFi Engine web site and studied the schematics
and parts lists. I examined all the components, including the switches, connectors
and other parts and established that mechanically, the components were sound.
Electrically, the components with the highest potential for wear and degradation
were the capacitors, 44 in all.

After scouring online electronics parts sellers’ catalogs, I estimated the
cost of replacement capacitors to be no more than $100, including delivery.
It seemed a reasonable investment to bring an old classic back to tip-top shape,
so I put in the order for United Chemi-Con and Nichicon Electrolytics, Panasonic
Aluminum Organic Polymer Capacitors, and film capacitors from TDK, Panasonic,
WIMA, and Kemet — all brands highly or at least fairly well regarded. The
capacitance values were as close to original as I could find, and the voltage
and temperature rating were higher whenever possible.

Removing the capacitors was more difficult than soldering in the new ones.
In some cases, the entire PCB had to be removed to gain good access, or a nearby
component desoldered and removed first. In some cases, the trace on the PCB
threatened to pull off. I went slowly, to avoid any unrecoverable disasters,
and after about three long afternoons of patient work, I had a HK770 with all
new capacitors. A simple adjustment of bias current brought it completely up
to spec.

The restored HK770 was installed for a while as the amplifier for the left
and right main speakers in my TV room. It exhibited absolutely no hum or other
noise, and easily matched the quality of the Anthem
MRX500 A/V receiver which normally powers those speakers. I never checked
the maximum volume that could be reached before clipping, because in that small
room (11 x 12′ with 8′ ceiling) with those speakers, my ears reached clipping
long before the system. Suffice it to say I don’t believe I ever heard it distort
or misbehave in any way, playing music or the audio track of any video programming.

After a few months, I realized the HK770 was a redundant possession, a very
nice fetish object, but not exactly essential. Eventually, I helped find another
good home where it’s better used and appreciated.