Back in March of this year, when my partner Kurt Lieber and I were scrambling to make Silent PC Review a reality, I discovered that the University of British Columbia (UBC), a large prestigious institution located in Vancouver, has an acoustic anechoic chamber. This was exciting news to me, as scientific acoustic testing in an anechoic was always a dream I had of doing — not only for PC components but, some years ago, also for high fidelity loudspeaker systems I custom designed and built. Was there some way for me to access that magical chamber where echoes, reverberation and background noise are diminished to the vanishing point? (The word anechoic comes from the combination of the prefix an meaning without, and echo: no echo.) 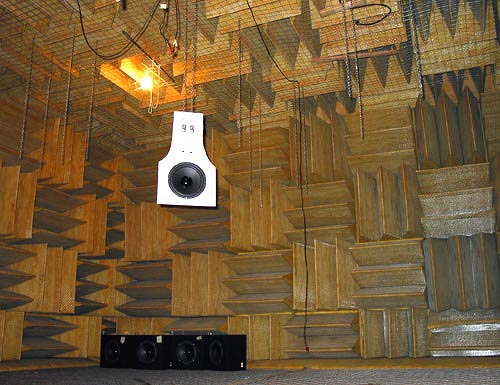 UBC’s anechoic chamber is modest in size, but reasonably adequate for PC noise measurements. The wedges of fiberglass are mirrored on the floor. A steel wire mesh stretched a foot above the highest floor wedges allows access into the room. Most objects to be measured, and tools such as microphones are suspended from the wire mesh covering the ceiling.

A key challenge for SPCR to rate PC components by their noise is that quiet is a relative and subjective term. It is a challenge for anyone making products where a primary selling point is low noise. The complications of decibels and the usual confusion about loudness, power, logarithmic scales and other matters makes it difficult for the average consumer to know by the numbers how it all translates to the user experience. While loud noises are generally not that difficult to measure, as noise drops down towards inaudibility, the measurement challenges become very great, indeed.

Access to sophisticated acoustics measuring equipment, to people with training and extensive knowledge in acoustics, and to an anechoic chamber could certainly help SPCR

A little research and a phone chat with a helpful lady in one of the UBC libraries revealed that a Professor Murray Hodgson of the mechanical engineering department manages the acoustic lab resources, which includes the anechoic chamber. Emails, phone calls and many weeks went by before I finally met with Prof. Hodgson. It turns out Dr. Hodgson is an authority on many aspects of acoustics and leads the Acoustics and Noise Research Group at UBC.

While Dr. Hodgson expressed interest in helping me conduct research on PC noise for publication on Silent PC Review, his mandate regarding the university’s acoustical testing facilities is to further students academically, and access to non-university functions is limited to paying customers. His suggestion was to try and combine the aims of SPCR with bonafide student projects. In other words, to define SPCR wants into research project that students would be interested in undertaking as part of their academic course. But this could not happen until the fall semester.

Fall is here, and Dr. Hodgson’s posting of PC noise related project work has attracted three final-year undergraduate students in the mechanical engineering program. The project has been narrowed to an examination of fans for noise, airflow and possibly vibration, most likely at varying voltages. My role is something akin to an industry “client”, with the students playing the role of analysis engineers under the guidance of their manager, Dr. Hodgson. This is precisely the kind of situation that the students will face if employed in the acoustic industry. 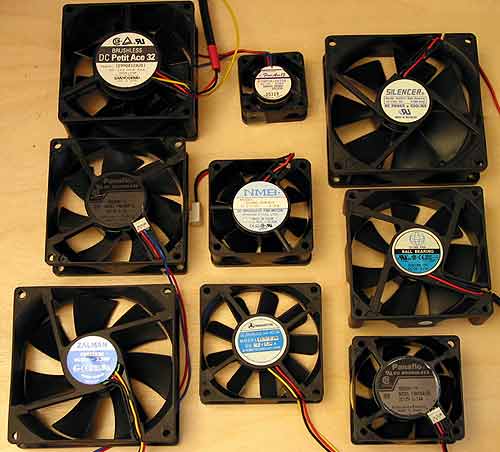 Some of the thousands of fan brands and models used in the computer industry.

With fans, despite the existence of clear, repeatable standards for measuring noise and airflow, a majority of manufacturers use microphone distances of 1-meter, 3-feet or some other distance in free space (i.e., without any impedance on the fan load) to take a single point sound pressure level measurement. Others measure the same at 30cm or 50cm. Only a few take the time to do complete sound power measurements with the fan under some kind of load that at least approaches real life applications.

This means that the manufacturers’ specifications are often not directly comparable. It takes a careful, trained engineer to calculate specifications obtained from disparate techniques into comparable numbers. Even for them, it might actually be easier and certainly more accurate to take prospective fan samples and re-measure with one consistent technique.

The PC Fan Noise student research project at UBC will consist of:

Naturally, results from this project will be published at SPCR as they become available.

ANSI S12.11 appears to be the most technically thorough acoustic test procedure for fans at this time. A required test apparatus is a testing plenum to mount the fan, and measure its airflow and pressure along with the noise. Noise information without airflow data is not useful; any fan can be silent if it is not spinning.

ANSI S12.10-1985 (R1997): Methods for the Measurement and Designation of Noise Emitted by Computer and Business Equipment

Defines uniform methods for measuring and reporting the noise emitted by computer and business equipment. The sound power produced by the equipment is determined and reported in terms of the noise power emission level in bels. The A-weighted sound pressure level at the operator’s position is also reported. The standard covers specific methods for installing and mounting equipment, operation of the equipment during the tests, and environmental conditions during the measurements.

One point made by Dr. Hodgson in the spring is that project funding is an issue on most campuses. If corporate sponsors help finance some of the materials, equipment and tools for the project, it stands a much better chance of being successful.

Dr. Hodgson hopes this fan project will be the first of many in a series. This is my hope as well.

I did my due diligence through the summer, contacting people in various prospective companies and explaining why this project might be useful to them. In the end, three companies made commitments in principle for funding and/or support:

VIA (of motherboard chipsets, C3 and Mini-ITX fame) promised a sponsorship of cash and possibly equipment.

None of the above is absolutely confirmed, although VIA’s pledge does appear quite firm.

The UBC Fan Project should yield a set of real world data to match the theoretical calculations produced by anonymous author The Big Fan in his article Choosing Fans for Quiet, High Airflow: A Scientific Approach. While exhaustive testing of a huge number of fans cannot be promised, there may be enough data to at least confirm some of those calculations — and the manufacturers’ claims on which they are based — against empirical evidence. Silent PC Review will continue to encourage and participate in future research projects on aspects of PC noise with Professor Hodgson and the UBC Noise and Acoustic Research Group.