The PC system used as our test platform for VGA cards and coolers was recently overhauled. The improved hardware and test procedures have made for a quieter, cooler system that should give us more consistent test results with a bit more ease.

Any good hardware testing system requires both methodology and equipment. The gist of computer component testing is to place the item under test in a standardized environment and subject it to a series of standardized tests. The results obtained from testing of different models and makes can then be compared with confidence that they reflect real differences.

We have always tried to establish test systems that reflect real-use conditions rather than ideal ones. For graphics cards and coolers for graphics cards, this means using the test item in a real PC with airflow and thermal conditions typical of the very quiet systems we encourage readers to seek or build.

Recently we began to find fault with our video card and video card heatsink
test system, which by our standards simply wasn’t quiet enough any more, no longer reflective of current standards in system cooling, starting to show signs of wear and tear, and difficult
to service.

For a couple of years, our VGA test system been housed in a modified LX-6A19 (D8000) case from Cool Cases. This system worked well for a while, but like everything in the computer industry, it did not take long for its age to show. One main issue is the increased power of the ATI X1950XTX graphics card which became our high power test platform for video card coolers over the past year. The increased power had two effects:

1. It challenged the cooling of the CPU. The heatsink we were using was only just able to keep the CPU under throttling temperature. Turning up the speed of the 92mm fan on the CPU cooler was not a good solution because the increased noise level could interfere with acoustic measurements.

2. Over time, the stress and abuse of long-term, high power loading on the Antec NeoHE 430 began to show in increased buzzing from the power supply under high load. Increasingly, there was an annoying whine and
buzz when video cards were stressed with ATI Tool. In addition, its fan tended
to speed up during load and often become the main source of noise in the system, despite the
fact that it was separated from the rest of the system with a fresh air intake duct.
This same duct also made replacing the power supply and re-routing all the cables
a nightmare. Disconnecting the CPU fan and the power cable to the internal fan
controller was also problematic as it was buried deep inside the 3.5″ mounting
cage. There was no other misbehavior we could identify, but it seemed wise to make a preemptive move to replace the PSU before it failed.

We decided then to improve the test platform. The same motherboard, CPU, and RAM would be used. The case, CPU heatsink, and power supply would be upgraded so that thermal conditions would be a little less demanding for the CPU (and a bit for the VGA card as well). As the case is a P180, the PSU would also be less subject to high heat in its separate thermal chamber. We would also seek to reduce the overall noise level of the test bed down closer to inaudibility. (The hard drive was changed as well, but only for logistical reasons; it’s an insignificant move that has no bearing on our acoustic and thermal testing.)

The table below details the old platform on the left column, and the new platform on the right. The fundamentals have not changed; it’s still a lean, clean machine with a fairly hot processor and very low airflow. But it runs cooler and more quietly under all conditions.

The Antec P180 case has two front 120mm intakes — the bottom one feeds fresh air to the hard
drive and power supply section while the top one allows airflow into the rest
of the system. The stock filter and door over the intake vent for the main chamber were removed. They were replaced with the metal mesh for the top panel 120mm fan. The filter for the lower PSU/HDD chamber was retainted, but its cover door was also removed to reduce airflow impedance. The front door was cast away
as well to improve airflow. The top three optical drive bays are covered with a block of
open-cell foam which allows some air to flow in but also absorbs much of the internal sound from coming out. You could say almost the entire front panel is an intake vent.

The processor is cooled by a modified Gigabyte
G-Power 2 Pro without its plastic shroud utilizing a Scythe Slip Stream 120mm 500RPM fan, connected
directly to the motherboard’s CPU fan header. This solution is more than adequate
to cool the CPU and as a bonus, is completely inaudible. A block of foam is positioned
on the ceiling over top fan vent, which also draws some air in when the system is running.

The only system fan is a Nexus 120mm mounted in the rear exhaust position with silicon rubber nubs made expressly to reduce vibration conduction into the case. It is powered by the PSU through to a customized fan speed controller using zener diodes. A knob protruding from the wall
of foam at the front allows the fan voltage to be easily varied.

The power supply is a Seasonic
S12-600 with the stock fan replaced by a Scythe
Slip Stream 120mm 800RPM fan, hard-wired to run
at 5V. The fan just barely starts up, and spins extremely slowly, at ~400RPM. The limited airflow going through the power supply is not an
issue since it is cordoned off at the bottom of the case far from the CPU, and the intake vent/path are extremely open. The temperature of its intake air is that of the room itself. Air
expelled from the PSU is only mildly warm, even during long sessions of high power testing.

The notebook hard drive is
suspended in the lower drive bay with zip ties and cloth elastic with a 2mm round cross-section. No vibration from the drive can be felt on the drive bay. Foam is attached to both sides
of the compartment divider as an extra silencing measure. It helped to reduce a touch of lower frequency hum most likely caused by the main fan exciting the resonance of the enclosed air in the main chamber.

The end result is a three fan system, with the system fan @ 6.75V being the loudest
component. The system noise level is only about 19 dBA@1m. For comparison, during the
quietest moments in our lab with all the computers turned off, the ambient noise level is around 17 dBA. As the comparison table below shows, the new platform gives us superior CPU cooling (a 10°C improvement)
and a noise level reduction of approximately 2 dBA. Not too shabby.

As before, high end video card heatsinks will be installed on a Radeon X1950XTX —
a high-powered video card that features a thermal sensor built into the GPU
core. The accuracy of the sensor is unknown. The video memory heatsink will
usually be left on unless it interferes with the VGA cooler in some way.

Our test procedure has been altered slightly. Instead of stressing the
GPU with only ATI Tool’s artifact scanner (which we did just once during the
Zalman VF1000 LED review), we have decided to go back to using both GPU and
CPU stress software simultaneously. While GPU temperatures will be lower,
it is nevertheless, a test that more accurately mimics the stress
produced by a modern video game, which demands a lot of the entire system —
not just the GPU.

Our main test consists of ATI Tool’s artifact scanner running in conjunction
with CPUBurn to stress both the graphics card and processor simultaneously.
The software is left running until the GPU temperature stabilizes for at least
10 minutes at which point, both the GPU and CPU temperatures are recorded.

In
addition we also take measurements of the system’s overall noise level
and power consumption. If the heatsink has a fan, the procedure will be repeated at various
fan speeds while the system fan is left at the lowest setting of 7V. If it is
a passive cooler, the system fan instead is varied to study the effect of system
airflow on the heatsink’s performance. If artifacts are detected in ATI Tool
or other instability is noted, the heatsink is deemed inadequate to cool the
video card in our test system.

Preliminary testing is done at idle, and also with only CPUBurn running
for comparison. For idle results, the system will be left alone for 10 minutes
before ATI Tool is loaded and the first temperature it reports used.
We will do this because on our test platform, after ATI Tool is loaded, it puts
some kind of stress on the GPU, causing the temperature to climb immediately
(even if it is left idle for hours beforehand) and the power consumption to
increase by approximately 10W. We theorize that initially the card is in 2D
mode, either underclocked or undervolted (or possibly both) and that ATI Tool
automatically puts it in 3D mode, which would account for the rise in temperature
and power draw. ATI Tool will be left running in the background for the remainder
of testing which is why the GPU temperature during CPUBurn will appear higher
compared to idle. Consider this the difference between 2D idle and 3D idle.

After the overhaul, re-testing of some recent heatsinks was in order. The X1950XTX stock cooler, Zalman
VF900-CU, and Zalman VF1000 LED were put to the test. The ambient temperature
during testing was 21°C, while the ambient noise level was 17 dBA. 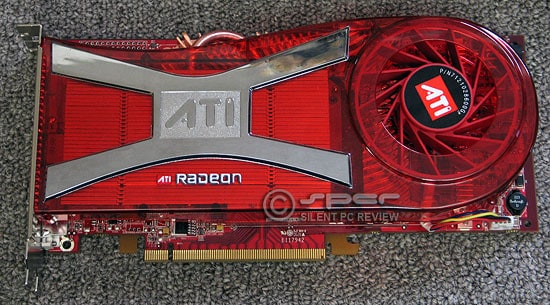 The stock cooler was tested at 43% speed, much lower than what the fan normally
spins at. It was just low enough to adequately cool the card without puncturing
our ear drums. At 28 dBA, it is still far from quiet unless the speakers are
turned up. 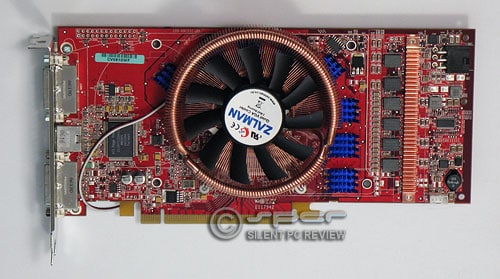 The results of the VF900-CU were similar to those obtained from the old
test platform. It was seriously challenged by the X1950XTX; it
simply was not designed to cope with such a hot card At 5V, ATI Tool detected
delta artifacts. Raising the fan speed did help stabilize the card, but the
temperature did not really improve substantially until the 12V level. The Zalman VF900-CU should be used on cooler cards such as nVidia Geforce 7, 8500 and 8600 series and perhaps the ATI 3850. 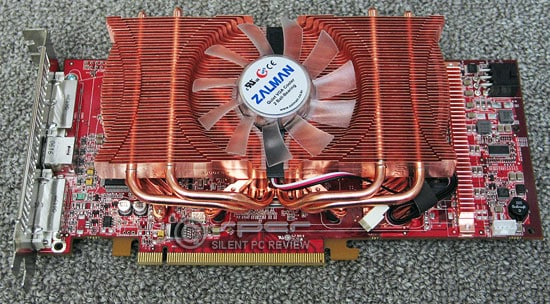 As in the earlier test bed, the VF1000 trounced the VF900 by almost 20°C at all fan speeds with practically
identical noise levels. 5V is enough for the X1950XTX and it will be
inaudible in most systems.

That’s our updated VGA test platform. We believe the improved
stability and noise level of the new test bed will help us more accurately analyze
the thermal and acoustic performance of VGA cards and coolers. So far, we only have a couple coolers tested, but in time, there will be many more results
for comparison. In the near future, look for a review of the much-lauded Arctic
Cooling Accelero S1.