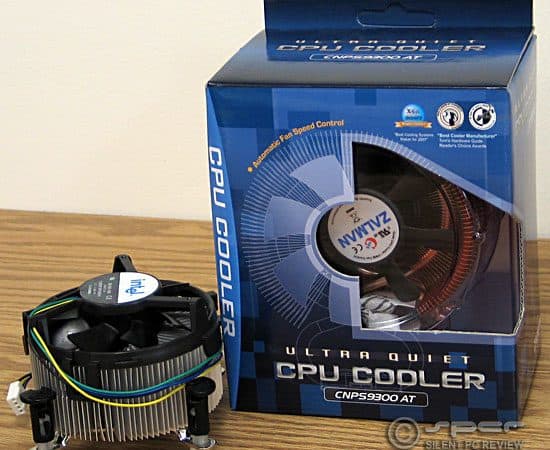 It was one of the pioneers in quiet computing, but Zalman’s latest product, another shrink of a 3+ year old design, disappoints. The cooling performance is good, but the CNPS9300 AT doesn’t win any prizes for acoustics or value.

The Zalman CNPS9700
giant copper CPU cooler offered good performance but suffered
a high price-tag and a nasty sounding fan. These drawbacks overshadowed
the clever design of the heatsink itself, and made it difficult to recommend
for a silent PC. One solution was to replace the integrated fan, a procedure recommended only for the handy. We have not seen a new CPU heatsink design from Zalman
in quite some — the most recent additions to their CPU heatsink
lineup are rehashes of what they’ve done in the past. The CNPS9300
AT is no exception.

The CNPS9700 is no match for the cheap
tower heatpipe coolers that dominate the current market. The CNPS9300 AT is
a drastically slimmed down version of the 9700, so it shouldn’t be able to match
or beat its predecessor’s performance. It’s narrower, lighter, and is equipped
with a smaller fan. While it may offer more clearance around the CPU socket,
it is not significantly shorter, so case compatibility won’t be much better.

The most interesting thing about the CNPS9300 AT is the fact that it exists.
Why did Zalman produce it, and why now? What is its place in the market? Those
are the questions we hope to answer.

AMD installation is accommodate using a simple tension clip.
An L-shaped lever must be inserted at one end. There are two positions for this L-lever. According to the manual the outer one is for AMD and the inner
one for Intel. This makes no sense since the current Intel LGA775 CPU socket uses push-pins. On the bright side, the clip can be slipped
between the heatpipes, so that the cooler can be rotated 90 degrees on AMD motherboards,
allowing the fan to point in whatever direction is desired. This is a feature that’s not as common as it should be, due mainly to the rectangular shape of the AMD CPU mounting area.

The mounting for LGA775 is more involved, requiring free access to both sides of the motherboard. It is similar to previous Zalman heatsinks, quite secure and tight. You cannot install it with the motherboard already in the case.

Some basic physical measurements have been
added to our test routine.

As the fin spacing is not uniform through the heatsink, measuring it has
limited comparative value and so we have omitted it from our fin thickness and
spacing comparison table.

Load testing was accomplished using CPUBurn to stress the processor, and the
graph function in SpeedFan was used to make sure that the load temperature was
stable for at least ten minutes. The stock fan was tested at various voltages
to represent a good cross-section of its airflow and noise performance.

The stock fan was tested briefly for its noise characteristics. The results
were not surprising.

The CNPS9300 AT fan is very loud, especially at high speeds — an unfortunate
trademark of Zalman fans. The CNPS9300 is subjectively poorer than its predecessors
due to the vibrations transmitted by the fan — far more noticeable
on this particular model than any of Zalman’s previous coolers. When we placed the test board
on foam, SPL dropped by 3 dBA at 5V. In addition, though
the Zalman has finally gone with a PWM fan, reducing the fan voltage did not
result in drastic reductions in fan speed as we typically see with PWM fans.

Fan @ 12V: Performance was excellent at 14°C above ambient temperature.
This is only two degrees higher than the best load temperature we’ve ever recorded.
Of course at 12V the fan was just plain loud. Very growly and aggressive. The
vibration noise was somewhat masked by turbulence.

Fan @ 7V: Thermal rise was an additional one degree. The fan exhibited chuffing
and the vibrations became more noticeable.

Fan @ 5V: Cooling suffered another 5°C — it would seem the cooler’s
sweet spot is between 9V and 7V (roughly 1000~1800 RPM). The fan chuffed and clicked up close. The
vibration though dominated the noise signature — it was very conspicuous,
as if the fan were not secured properly.

Though the noise measurements we took of the CNPS9300 AT were taken in our
new anechoic chamber, items generating over 20 dBA@1m measure roughly the
same in both our old and new testing facilities. Since all our measurements are over 20 dBA@1m, the results can be compared
to those taken previously.

The performance of the CNPS9300 AT is eerily similar to two other loud heatsinks
we’ve tested previously. There was very little measurable difference between
the CNPS9300, CNPS9700 and another loud CPU cooler, the Thermaltake
V1, at equivalent noise levels. Surprisingly, despite having only two
heatpipes and a greatly reduced width and surface area, the CNPS9300 performs
almost exactly the same as the CNPS9700. As the mounting system is the same,
and fan is actually smaller, this suggests that the 9700 may have been
bigger than it needed to be. (Editor’s Note: On the other hand, with a significantly hotter CPU, you might see an advantage in the 9700. However, not many current CPUs run hotter than our test platform’s Pentium D950, which has a TDP of 130W.)

These recordings were made with a high resolution, lab quality,
digital recording system inside SPCR’s own 11 dBA ambient anechoic chamber, then converted to LAME 128kbps encoded MP3s. We’ve
listened long and hard to ensure there is no audible degradation from the original
WAV files to these MP3s. They represent a quick snapshot of what we heard during
the review.

These recordings are intended to give you an idea of how the
product sounds in actual use — one meter is a reasonable
typical distance between a computer or computer component and your ear. The
recording contains stretches of ambient noise that you can use to judge the
relative loudness of the subject. Be aware that very quiet subjects may not
be audible — if we couldn’t hear it from one meter, chances are we couldn’t
record it either!

The recording starts with 10 second intervals of room ambient, followed by
10 seconds of the actual product’s noise at various levels. For the most
realistic results, set the volume so that the starting ambient level is just
barely audible, then don’t change the volume setting again.

The CNPS9300 AT is basically a compact version of the CNPS9700 with few improvements,
yet the performance is comparable. It would seem that Zalman’s design is fundamentally
a good one. If any other heatsink lost half
its surface area, its cooling ability would probably be seriously compromised.

The mounting system for Intel motherboards is secure, and while the same cannot
be said for AMD boards, the heatsink’s weight is quite low, actually under the 450g maximum recommendation of both AMD and Intel, so it’s not much of an issue. Unlike most AMD heatsinks, Zalman’s mounting system allows the fan to blow in any direction.

Where Zalman continues to fail is in fan acoustics. It is much too loud. The vibration problem could have been a one-off due to bearing damage in transit, but that’s just a conjecture. It seems to have less copper than their
other CPU coolers, and it’s cheaper, but $45-$50
is still too much for this level of performance and noise.
There are many cheaper alternatives that outperform the CNPS9300 AT,
in both cooling and noise. So where does the CNPS9300 AT fit in? It doesn’t really
— there’s no situation where it would be the best choice.

Zalman seems set in their ways, continuing to use bad fans and expensive copper
designs while the rest of the cooling world moves on. They were pioneers in low-noise
computing, but today their innovations are few and far in between. We can only shrug and wait to see if Zalman slides further into mediocrity or rejuvenates itself in the coming months.

Our thanks to Zalman
Tech for the CNPS9300 AT heatsink sample.

Discuss this review in the SPCR forums.