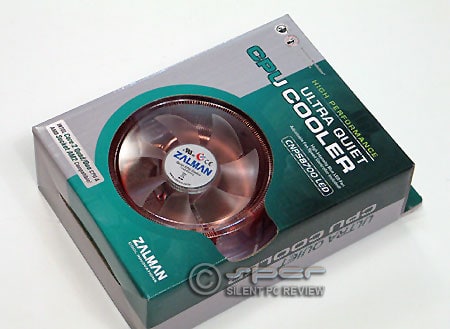 The new Zalman CNPS8700 CPU heatsink/fan has a rich heritage: It borrows from the company’s earlier products, the 9700, the 7000, and even the VF900, a GPU cooler. It’s a return to “tradition”: An all-copper, blow-down fan cooler with additional muscularity provided by modern heatpipe design.

Zalman was one of the first companies to specialize in quiet heatsink/fans for computers.
We here at SPCR have a soft spot for their original flower series of heatsinks which
were highly innovative and top-of-class in their heyday. But over the years, their
top position for quiet yet effective coolers has been gradually eroded by Scythe, Thermalright, and others who took an accelerated path in integrated
heat pipes into massive tower heatsinks. Zalman was much slower to adopt heatpipes, finally adding them to
their designs in the last year or two, and going vertical with the CNPS9500 and CNPS9700.

Now Zalman looks
to return to their roots by producing a new low-profile CPU heatsink. You could call the CNPS8700
LED an updated heat pipe version of their classic, highly popular CNPS7000 and CNPS7700 models. The 7000 was first introduced back in early 2003, some five years ago, yet it is still widely available in the marketplace! This is a very long time by computer standards, and a testament to the product’s success.

Interestingly, the 8700 also has similarities to the Zalman VF900 graphics card cooler — enlarged and adapted for use on a CPU. That graphics card cooler also features two heatpipes, all copper materials, and a radial fin structure. It proved to be one of the most effective GPU coolers we’ve tested, despite is moderate size.

(Editor’s note: In case you’ve been away from the CPU heatsink scene for several years and have not encountered them before, be advised that heatpipes have become ubiquitous, used even on some stock heatsinks supplied with high end retail AMD processors. It’s not a new technology but it’s new to computer cooling. Here’s Wikipedia’s current entry on heatpipes and how they work.)

Weighing in at only 475g, it is significantly lighter than both of the
all-copper versions of the CNPS7000 and CNPS7700 (773g and 918g respectively).
The old design featured fins pressed together tightly forming the base.
This has been tossed out in favor of heat pipes soldered to a copper plate
base. What really makes the CNPS8700 stand out is its height. At only 67mm
it’s a good candidate for a low profile case. Not everyone can fit a six
inch high monster in their system.

The fan is 110mm in diameter and of the double ball bearing variety, unfortunately,
similar to the Zalman’s previous heatsink fans. Our experiences with Zalman’s
fans have been far from positive as they generally have unfavorable noise
characteristics and spin too fast at full speed for our liking. The fact
its translucent to accentuate the effect of the blue LEDs doesn’t help
as clear plastic is usually more brittle and prone to resonating than plain black plastic. The fan is
attached to a metal frame above the base with only two screws and the impeller
of a 120mm case fan is the perfect size for a replacement.

If you find the fan
intolerable, it is not too difficult to replace, although the procedure calls for some mechanical skills. The procedure should be similar to what’s already been done with the 9500 (and 9700) heatsinks.

The air is directed downward by the fan through the heatsink with the radial
nature of the fins distributing the flow over the components around the
processor — an important feature tower heatsinks lack. The simple fact that the fins don’t connect directly to the base makes the 8700 just about the best heatsink for providing airflow around the CPU. Note: The fan uses
a 3-pin connector, which means if your motherboard requires a 4-pin PWM
fan in order to control it, you are out of luck. You can however, use the
Fan Mate 2 manual fan speed controller that Zalman provides gratis to adjust
the fan’s voltage to between 5V and 11V.

For interest’s sake, we scrounged around the lab for the 8700’s predecessors…

Installation on our LGA775 platform was fairly straight forward. Utilizing
the four mounting holes around the socket, a "X" shaped backplate
on the back of the board is mated to a plastic mounting frame on the other side
with screws.

An AMD installation is much simpler as no mounting frame is required. The standard clip is basically a "native" AM2 socket clip, and it engages directly onto the standard AM2 (or the earlier 939/754/940) heatsink retention bracket that comes installed on the motherboards.

Thermal compound is applied to the processor and the heatsink is placed atop
of it. The metal clip is slipped across the heatsink between the heatpipes. One
side of the clip latches onto the mounting frame. On the other side a small
lever must be slipped over the clip and into one of two notches (one for Intel,
the other for AMD). The lever not only gives you leverage to depress the clip,
but actually is the other piece that hooks into place. This took us a few moments
to figure out the details as the instructions and diagrams were not very clear.

Depending on how you orient the frame, the lever may cause interference. On
our test motherboard with the lever pointing downward, it interfered with the
northbridge heatsink. To the rear it was blocked by the VRM heatsink. When pointed
above it overhung the edge of the board by almost a centimeter which could get
in the way of a power supply if it was mounted inside a case. The heatsink itself
also may exceed the board’s edge depending on the location of the socket. No
matter what motherboard you use, though, there should be at least one orientation where
the lever won’t cause any problems. On another positive note, no tools were needed
to mount the heatsink.

Testing was done according to our
unique heatsink testing methodology, and the reference fan was profiled
using our standard fan testing
methodology. A quick summary of the components, tools, and procedures follows
below.

Sound pressure level (SPL) measurements were made with the fan powered from
the lab variable DC power supply with no other noise sources in the room. The
ambient conditions during testing were 18 dBA and 22°C.

Load testing was accomplished using CPUBurn to stress the processor, and the
graph function in SpeedFan was used to make sure that the load temperature was
stable for at least ten minutes. The fan was tested at four voltages: 5V, 7V,
9V, and 12V, representing a full cross-section of its airflow and noise performance.

@12V: Performance was superb with the CPU temperature rising only 16°C
above ambient but at the cost of very turbulent and aggressive noise. Measuring 40 dBA@1m, it was a far cry from the maximum 33 dBA cited by Zalman… and completely unacceptable to SPCR.

@9V: The noise level dropped dramatically though it was still a curse on our sensitive
ears. The temperature difference was barely measurable, which was a good sign.

@7V: The fan was much more bearable but still annoying with an evident buzz
and slight rattle. Performance suffered by only two more degrees than at 9V.

@5V: The noise level finally crossed the border into what we would consider
quiet territory. At 1m in our quiet lab it was audible but unintrusive.

For a 67mm tall heatsink, the CNPS8700’s performance was commendable. With
only a three degree difference between 12V and 7V, it’s clear that Zalman could
have easily used a quieter, slower fan with minimal negative effect
on its cooling ability. There were no surprises with this fan. It’s basically the one used in the 9700, and measures and sounds just about the same, within typical sample variance range. It’s not a nice sounding fan except at the lowest speeds.

For a thorough comparison, we decided to put up the CNPS8700 against its
bigger, vertically-oriented kin, the CNPS9700, and two of the relatively smaller coolers
we’ve tested in the past: Thermalright SI-128 and Scythe Ninja Mini. Only the Thermalright is a blow-down design.

Note: All the Sound Pressure Level readings are in decibels with A-weighting at 1m distance.

The CNPS9700, which weighs about 60% more than CNPS8700, performed only a few
degrees better at each fan voltage level, while generating approximately the
same amount noise. It’s somewhat surprising that all that extra weight and dissipation
area gains so little.

Both the SI-128 and the Ninja Mini cool better with lower fan speeds and noise
levels compared to the CNPS8700. With stock fans generating noise in the 28 dBA range, the Zalman matched the Mini’s level of performance. It seems the CNPS8700 is a clear loser here, but when you take into account
that its competitors are both almost two inches taller, you can’t help but appreciate
the effort given by the underdog. It’s not the best performing heatsink, but
for its size it’s definitely an overachiever.

Taking into consideration its height and weight, the CNPS8700 is an excellent
cooler, achieving better results than expected. It can’t quite compete with
larger, taller heatsinks, but isn’t left in the dust either. It’s relatively compact, beautiful
to look at and provides very good cooling not just for the CPU but for the components
around it. The lack of such cooling is a bit of a concern on many tower heatsinks with fans that don’t blow down toward the motherboard but, rather, across it. This is especially true when such heatsinks are combined with very slow fans that blow little air (as so many PC silencers are apt to do).

The mounting system is perfectly secure for a heatsink of its weight. Compatibility
is excellent; there aren’t many situations where the CNPS8700 can’t
be used, unless the socket is very close to the edge of the board and there
is minimal distance between the board and power supply.

The integrated fan, as with previous Zalman coolers, is unacceptably noisy except at the lowest speeds. Unless run at 6V or less, it can’t even be considered close to quiet
by anyone with healthy hearing. Why Zalman continues to utilize these fans is
baffling. The 8700 has a great design with much potential, yet as with previous products, Zalman seem to
treat fan selection as an afterthought. At least the Fanmate2 speed controller is provided so that the fan noise can be reduced. For hands-on readers, we
suggest replacing the stock fan with something quieter. As mentioned earlier, the procedure should be much like that we employed to swap out the fan on the 9500.

Its 100% copper design
also makes it fairly expensive; at $60, it’s priced like an elite, high-end
heatsink, but doesn’t quite match the top performers at this price range. If you have the room, there are better quiet high performance cooler choices out there, but if you’re
tight for space we have no qualms recommending it. For a low-profile case, the
Zalman CNPS8700 LED is probably one of the best option for CPU cooling.

Our thanks to Zalman
Tech Co. for the CNPS8700 LED review sample.