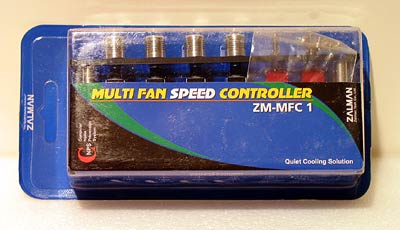 Our second multiple fan controller review is on the Zalman ZM-MFC1, a fairly sophisticated, capable device. How does it compare to the buget-priced Sunbeam Rheobus?

The ZM-MFC1 is Zalman’s first entry into the multichannel fan controller market. Much more than a barebones fan speed controller, it offers rpm pass-through, LEDs to gauge fan speed, and continuously variable as well as switched channels. As usual for Zalman products, it’s smartly merchandized in a plastic/cardboard display package.

Zalman went for an unusual look with the ZM-MFC1. The faceplate is made of blue tinted clear plastic which makes the circuit board underneath somewhat visible. There are plenty of knobs, switches and LEDs on the 6-channel ZM-MFC1. Four metal knobs control 4 channels and two 3-way switches control the other 2. The knobs turn ° of a revolution and are specified to adjust the voltage within a 6.5 volt range. At 7/16″ diameter x °” deep, each knob is a good fit for my fingers and has a solid feel. They seem difficult to turn by accident. The only thing I would wish for is a marking on each knob to show where it’s pointing, but that can be easily resolved with a pencil.

The 3-way switches go between 12 volts, 5 volts and off. They have a firm action. Protruding out 9/16″ from the faceplate (just a hair more than the knobs themselves), they did fit behind my Antec SX1040 case drivebay door, but just barely.

Each of the 6 channels has an LED to display its status. For the knob-controlled channels, the LEDs vary in intensity with the voltage. Under certain ambient lighting conditions and voltage settings, the LEDs can flicker, but should not be uncomfortable to the eye. The brightness of the LEDs should not be a problem for anyone either. For the switch-controlled channels, the LEDs go between red for 12 volts, blue for 5 volts and off.

As the photo below shows, the ZM-MFC1 comes with 4 sets of fan cables. More on that later. 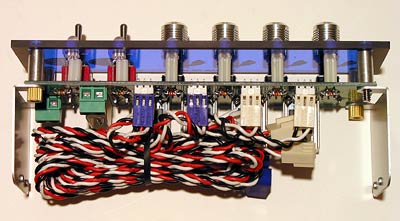 The view from the bottom in the photo below provides a hint regarding the unit’s genealogy: The channels whose output voltage is controlled by the knobs use the circuitry found in the Fanmate 1, Zalman single-fan voltage controller. Yup, those are basically 4 Fanmate 1s in a row with the addition of the LED for each. 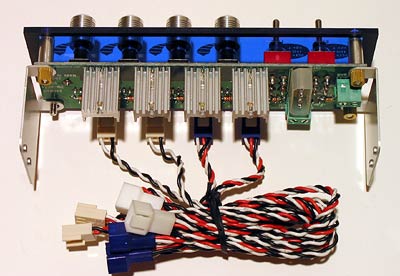 To supply the ZM-MFC1 with power, a single female 4-pin peripheral connector from the PC power supply is connected to the male socket on the back of the unit — seen on the PCB above. This single connector provides 12V to all 6 channels, and 5V to the two switched channels.

The illustration below from Zalman’s web site (also on the back of the package) explains it all pretty clearly: 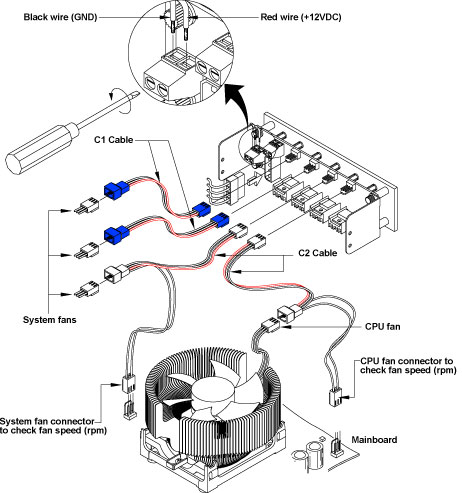 Starting from the top of the picture above…

1. Connecting a fan to either of the switch-controlled channels is via set-screw terminals that accept bare wires only. You could parallel-wire 2 or more fans to each switch if necessary. I initially though this was a drawback because any fan with a connector would need to be cut off and the wires would need their insulation stripped. But then I realized that, for 3-pin fans, an ideal setup would be to cut off the ground and 12 volt lead from the connector and leave the rpm signal wire with the connector for rpm monitoring via the motherboard header. Good thinking Zalman!

Many fans will have wires that are too short and will require an extension cable to reach the headers. Thankfully, 4 extension cables are supplied. They measure 15 ° inches (40 cm), but can be untwisted for another 1 ° inches of length. The two cables with blue colored connectors are simple extensions.

The 2 cables with white colored connectors feature an additional extension of the rpm signal and ground lead that can be connected to a motherboard or other RPM monitoring device. That’s if your fan has a 3-wire connector and provides RPM output. Imagine that, a fan controller that will let you monitor rpms out-of-the-box! Just be careful to plug the connector with 3 wires into the Zalman and the connector with just 2 wires into the motherboard. If you do it in reverse, your fan will get no power! Note that all 4 knob-control channels can be RPM-monitored; you just need to get 2 more cables like these white-colored ones and have RPM monitoring devices to plug them into.

On the other hand, I would have liked to have seen the fans headers positioned a littled lower. If the ZM-MFC1 is installed right below an occupied drive bay, if may present some clearance problems for some fingers that need to reach in – especially the switch-controlled channel 5. It may also be difficult to connect fans to either of the switch-controlled channels with the Zalman installed because the headers need a small flathead screwdriver to clamp down the wires.

In testing the Zalman fan controller, I asked:

1) What is the minimum and maximum voltage of the knob-controlled channels?
2) Does the ZM-MFC1 create any noise of its own?
3) Is RPM monitoring really preserved?
4) Do the knobs adjust the voltage smoothly?
5) What happens if a fan stalls?
6) What do the LEDs do?

The voltage loss through the active voltage controller channels was 1.45V on average, which is within Zalman specification of less than 2V loss. As would expected, there was no appreciable voltage drop through the 12/5V switch channels. There may be another 0.1-0.2V loss through the leads to the fan.

It doesn’t give the 6.5 volt range between minimum and maximum specified, but it still gives you 5 volts, which is low enough for the majority of PC silencers. The maximum 10.55 volts is significantly lower than the 12V that fans normally get in a PC. This voltage will usually provide some 90% of a fan’s airflow at 12V, but be audibly quieter.

The 5V minimum voltage on the 4 knob-controlled channels ensures a level safety even for careless or unknowing users. If the thermal-critical fans (such as the CPU cooler fan) are connected to these channels, at least minimum fan spin and airflow is assured even if someone accidentally changes the setting on the front panel. Even with the switched channels, at least one can tell with a quick glance if the fan switch is at 0V, because the LED will be off.

This is a significant fail-safe feature lacking in the Sunbeam, which allows any of its channels to be turned all the way down to just about zero, with no way of telling except by looking at the fan itself or the position of the little notch on the knob. With the Sunbeam, if the knob is moved a bit so that it is at 4V instead of 5V, the change may be too small for you to notice if you are busy or distracted; yet it would be enough to stop most fans spinning.

During testing, the ZM-MFC1 did preserve the PRM monitoring. How low you can go depends mostly on the monitoring circuit. Many of those found on motherboards stop working properly below about 1000 RPM. I was able obtain RPM readings from a Panaflo 80L1A using the an external RPM sensing device made by fancontrol (of the SPCR forums). Temperature/rpm monitoring obsessives will love this product for use with the 2-lead Panaflos! (Look for a review on it soon.)

The knobs turn 270 degrees, but have an impact on the voltage over just half its range. Assuming a reference of 6 o’clock on the knob at minimum, useful control over the voltage is available only up the 10:30 position. Past that, the voltage does not go any higher. So its range is not much different from the Sunbeam.

Already covered above but a little repetition won’t hurt: On the variable voltage channels (knobs), the LEDs come on blue whenever a fan is connected. The intensity of the LED varies with voltage — it gets brighter with higher voltage. On the switched channels, the LEDs come on RED when a fan is connected and the switch is set to 12V or BLUE for 5V. The LEDs are never annoyingly bright. This design is one step above that of the Sunbeam, as the fan itself becomes part of the LED circuit, closing the loop when it is plugged in, and an LED is on only when 5V or more is being fed to a fan.

The ZM-MFC1 still does not indicate whether the fan has stalled, although this is very unlikely to occur with a minimum voltage of 5V. Very few 12V fans will stall at this voiltage. However, this could occur with slow running fans as they get clogged up with dust over time. As you know if the fans are very quiet, it is difficult to tell when / if this happens, making such events potential thermal disasters.

There is an undocumented way to tell when a fan has stopped spinning. It depends on the ambient lighting conditions and the knob settings. There is a very faint flickering of the LED that occurs in normal operation. Its frequency is slower at minimum voltage and high enough to be almost imperceptible at maximum voltage. I noticed that the faint flickering of the LED stops when a spinning fan was deliberately stopped by pushing on the hub. Start the fan up again and the flicker comes back. It took careful observation to pick up on the change, but it is easier now to notice that I know what to look for. 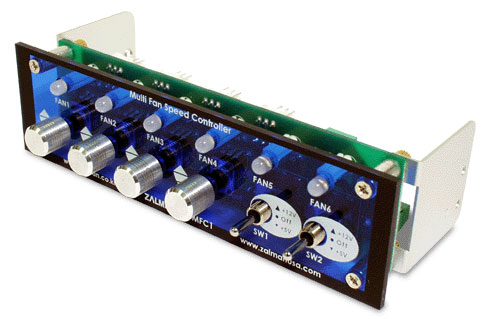 The ZM-MFC1 is a well designed product with strong features and just a few weaknesses. It is a useful addition to the silent PC arsenal. At prices as low as $29, the Zalman offers good value. The 4 + 2 channel setup plus ample power handling can address almost all fan configurations. With its 5V minimum voltage, the Zalman offers safer operation than the Sunbeam, but it is still most useful for those who really pay attention to their fans and appreciate centralized control.