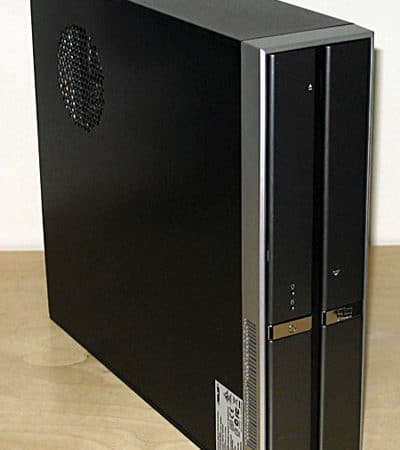 The name doesn’t exactly roll smoothly off the tongue, but the P3-P5G33 certainly looks slick enough. What does this stylish, modestly priced slim barebone PC from Asus offer?

Asus is a giant in the PC market with their fingers in just about everything
these days. While they are most known as the world’s #1 motherboard manufacturer,
they also make a variety of other products including graphics cards, optical
drives, phones, PDAs, networking equipment, basically anything with a circuit
board. Most recently they produced the highly popular Eee
PC, a compact laptop running Linux. There is seemingly no limit to their
ever-extending reach.

They have also manufactured several lines of barebone PCs for some time, most
notably, their P/Pundit line which are marketed as "booksize" and
their S-presso SFF cubes. Their latest barebones is the P3-P5G33. It’s a mATX
platform with a slim case which only accommodate low-profile expansion cards.
The case is paired with an Asus
P5K-VM motherboard, powered by Intel’s G33 northbridge and ICH9 southbridge.
Also included are a 220W power supply and a media card reader. On paper, the
P5G33 is a fairly typical, traditional product without any major innovations.

While the board that came included with the P3-P5G33 was physically identical
to the Asus P5K-VM, it had a different BIOS than the retail board.
The P5K-VM
specification page lists adjustable CPU frequency and voltage, and other
tweaks, but the BIOS we encountered was locked down, on par with the Intel
DG33TL we reviewed last year.

Memory timings, voltages, and CPU frequency were all off limits. The board
shipped with BIOS version 0202 and none of the options changed when we updated
to the latest version, 0301. It is very likely you can flash it with a retail
P5K-VM BIOS to unlock its functionality rather than the one provided
on the P3-P5G33 support page.

While we don’t recommend overclocking in such a tight case, it would have
been nice to be able to undervolt the CPU to save power and reduce the
thermal output.

As is common for most motherboards, the Asus P5K-VM is equipped with 3 fan
headers, one of which is PWM-capable. The CPU fan header can be controlled manually
via SpeedFan
with the Speed02 field by going into the Advanced menu and changing PWM mode
2 to "Manual PWM Control" and PWM type 2 to "PWM output."
SpeedFan was able to vary the Intel stock cooler’s fan speed from 1000 up to
1900 RPM. Note that one of the 3-pin headers does not report fan speed at all.

The CPU fan speed behavior with the Q-fan feature was not aggressive.
The system was placed horizontally with the auxiliary fan disabled, and
stressed using Prime95. The CPU temperature stabilized eventually well past
60°C, but the fan did not ramp up unless we stopped it for varying lengths
of time. We’re not sure if it was reacting to the temperature, or simply overcompensating
because it believed the fan had stopped.

Intel SpeedStep was enabled and Aero Glass, the Vista Sidebar, and the Superfetch
service were disabled during testing.

Except for the H.264 test clip, which normally uses less CPU cycles to render
than WMV3, overall, the video playback was good. Our Blu-ray title is encoded
with MPEG-2 so it wasn’t very demanding, and the GMA 3100 IGP had no problems
with it.

Idle power consumption was particularly high, due SpeedStep being broken. The
Intel DG33TL drew about 10-15W less with EIST working properly (though some
of this is accounted for the energy required to power the Blu-ray drive).

We also tested the system with a Seasonic SS-400ET 80 Plus power supply, which
we usually use in our motherboard testing. Using the stock PSU resulted in a higher
AC draw of between 12-15W. Assuming the Seasonic is 65% efficient at idle and
80% efficient at load, the Enertronics unit is only 53~70% efficient. We also
measured a power factor of 0.65 through most of testing versus 0.97 for the
Seasonic unit. It’s a low efficiency power supply by today’s standards.

The Delta fan was the really the main noise producer and it had a very aggressive,
almost growling tone. On a carpeted surface with the system laying horizontal
and the cover on, the noise level registered 34 dBA at 1m. With the extra fan
disabled, it lowered to 26 dBA. The thermal consequences of turning the fan
off were apparent immediately. The CPU temperature increased by 9°C and
the system temperature followed suit. Despite this the CPU fan did not ramp
up and the system remained perfectly stable. It’s probably a good idea to have
an exhaust fan, but we recommend you use a quieter fan or to undervolt the one
it ships with.

The power supply, despite its two small fans, was not hard on the ears.
Though it registered 1 dBA higher on our sound meter than the CPU fan at minimum
speed, it had a very smooth noise profile. The CPU fan on the other hand, exhibited
a very noticeable ticking. The PSU also did not generate any noticeable or measurable
increase in noise when stressed with Prime95.

With a better CPU cooler, it would be quiet enough to be used as a home theater
PC, even with the volume turned down. We initially tried to use the Arctic Cooling
Alpine 7 Pro, but it was a few millimeters too tall (it’s 86mm high). The Alpine
7 GT would be good a choice and if the auxiliary case fan is removed, the Zalman
CNPS8700 would also fit.

The P3-P5G33 would have been a far better product had it not included the problematic
P5K-VM motherboard. Initially we disliked it only for its lack of DVI
output, but the more we used it, the more ire it raised. EIST and
Sleep mode are critical for keeping power consumption down, and Blu-ray is the
future of entertainment as far as physical media goes. All three of these features
being buggy or broken is unacceptable. We really hope it was simply a bad
sample, and the problems we encountered are not common.

The included power supply was surprisingly quiet, and though it’s far from
an efficient power supply, it isn’t completely terrible either. It’s hard to criticize
it too harshly considering the price of the overall bundle. An 80 Plus unit would
have garnered much praise from us. Not only is it better for the environment,
it’s excellent for marketing.

We give high marks for the case’s overall appearance and the tool-less installation
scheme. The lack of ventilation is the only drawback. While there are plenty
of escape paths for the warm air around the CPU, there are only two small areas
on the front panel where cool air can be drawn in. When mounted horizontally,
the underside of the case would have been perfect for a few intakes.

Overall, it’s difficult to recommend the Asus P3-P5G33. The lack of DVI and HDMI, coupled
with problematic Blu-ray playback makes it unsuitable for a home theater PC/extender.
The lack of ventilating makes it undesirable for use with Intel’s higher-powered
chips, and it’s too slim to fit a performance heatsink or anything but an entry-level,
low-profile graphics card. It would make for a moderately quiet, small form
factor, general use system, but beyond that we don’t see a situation where it
would be our first choice. It’s a barebones system that is very easy on the
eyes, but this is one case where the book simply doesn’t live up to its cover.


Our thanks to Asus
for the product sample.