We review two more quiet notebook hard drives, from Hitachi and Samsung. The Hitachi 80GB 5K80 and the Samsung 40G MP0402H are both extremely quiet, low vibration drives and not badly priced. They are affordable quiet alternatives (for desktop PCs) to silent solid state hard drives. We listen, measure and describe their acoustics and performance.

To get a PC any closer to silence than the 20-22 dBA/1m noise floor imposed by the quietest desktop hard drives, we have to look at other storage options. With the best low noise fans, it is possible to achieve as much as 20~25 cubic feet per minute at a noise level of <18 dBA/1m. However, the lowest noise achieved by any desktop hard drive has remained unchanged at 20~22 dBA/1m for several years. Suspension shock mounting such a desktop drive can certainly effect a significant subjective drop in noise for a system that’s otherwise quiet, but it is very difficult to progress much below 20 dBA/1m with a desktop HDD if something approaching silence is your goal.

The very quietest storage technology is a RAM-based solid state drive, whose parts only move at the level of electrons. But their four-figure $ prices are unreachable for mere mortal PC users. A much more affordable alternative is a quiet notebook drive. As I discovered while reviewing an unusual small fanless computer, the Mappit A4F, some new notebook computers are amazingly quiet. The process of examining and using notebook hard drives as desktop HDD replacements began for me after that review; it is how this series of notebook drive reviews was born. 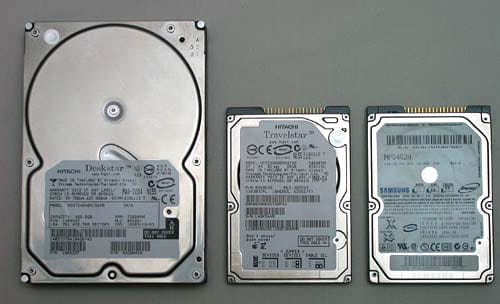 Another David and Goliath picture: The weight difference is typically ~600g against ~100g.

The size and weight are fairly obvious, but the thermal and power issues are not quite as obvious. You may never have thought about it before, but there’s a very good reason why notebook drives are more energy efficient than the bigger desktop drives: They have to be to work well with battery-powered notebook PCs. The difference is big.

Regular readers of SPCR know that suspending a hard drive for minimal noise usually causes a rise in temperature due to the lack of heat conduction between the HDD and the chassis. With a notebook drive’s trifling power dissipation, overheating is hardly ever a problem when suspending or even enshrouding as long as a small amount of airflow is somewhere nearby.

Back to the two notebook drives on hand, one hiccup with the comparison is that the Hitachi is an 80GB model while the Samsung is a 40G. The 80GB model uses two platters and four heads while the 40GB model uses one platter and two heads. There is a small consequence in noise: The two disk models are generally a wee bit louder. Hitachi cites the noise difference between their 2 platter and 1 platter models to be 0.3 Bels, and Samsung cites the noise difference to be 0.2 Bels. It is small but audible. A 40G Hitachi model has the same idle noise spec as the Samsung 40G, and a slightly higher seek noise spec. Please keep this in mind as we continue with the comparison. 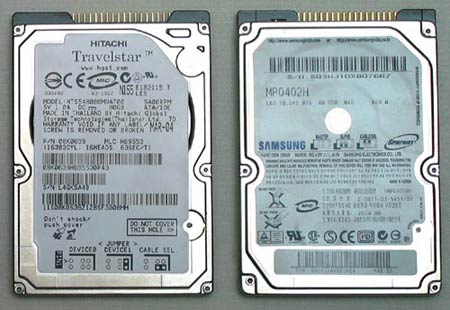 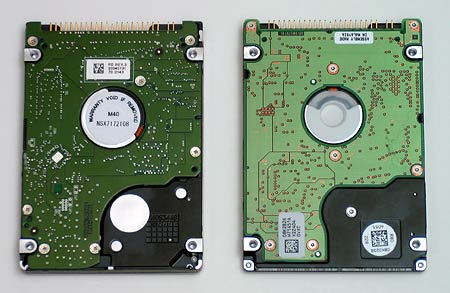 …bottom views: Not much to differentiate them visually.

There’s not much to differentiate these drives aside from the capacity and the noise. What do 0.3 and 0.5 Bel differences mean in real terms? It’s difficult to convert them to the dBA/1m SPL readings we use. It’s better for us to listen and measure.

Our focus is first on the acoustics and vibration, and then second, on the performance. Readers who familiar with the hard drive specialist web site, Storage Review, know how difficult it is to obtain truly authoritative performance information about hard drive performance; it takes many different kinds of tests in a variety of conditions. We don’t pretend to be such experts, nor do we care quite as much. Our usual point of view is: Give me the quietest drive with the smallest hit in performance. 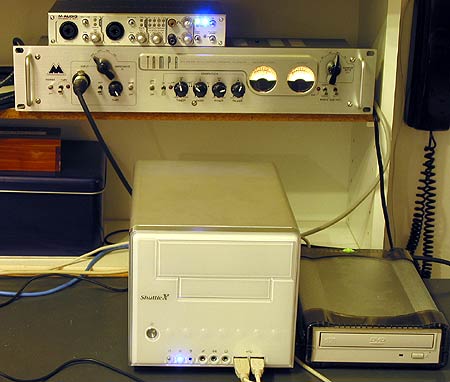 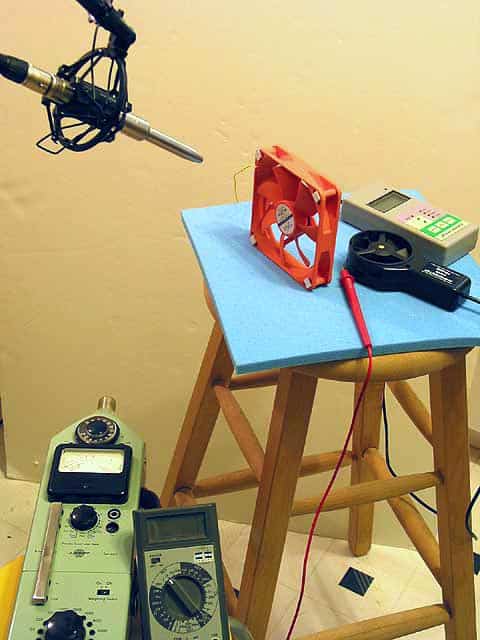 Observant readers will have noticed that the test PC actually employs a Samsung notebook hard drive of the same model as the one being tested. It is an obvious giveaway about the very low acoustic output of this drive. Here is a complete listing of all the two drives in this review, along with notebook drives reviewed thus far, and our reference quiet desktop 3.5″ 7200 rpm hard drives.

Below are sound recordings in MP3 format of the two notebook drives tested here, along with the two reference 3.5″ drives. Each recording is 20 seconds long; the first 10 seconds in idle, and the second half in seek, a state effected by running Windows drive defragmentation. They are presented in order of loudness.

Generally, most quiet drive users report negligible  if any  real practical difference in perceived desktop system performance between a fast 7200 rpm drive and a slower, quieter 7200 rpm drive. We know from experience that average random access or seek time has the greatest perceivable impact on HDD related desktop performance. Here we are looking at 5400 rpm notebook drives whose stated latency is nearly 2ms slower than typical 7200 rpm drives, and whose rated average seek time is at least 3ms slower than the fastest 7200 rpm drives. You would think that the performance hit would be quite significant; we have not found this to be the case.

Samsung MP0402H notebook drives are in use at SPCR not only in the audio recording PC described above, but also a couple of other workhorse PCs. They have been employed for at least three months. In that time, we’ve rarely, if ever, noticed any significant performance penalty with any of the work or activities conducted on these PCs. These tasks include:

SiSoftware Sandra 2005 (10.37) was used to run the file system benchmark on these notebook drives. 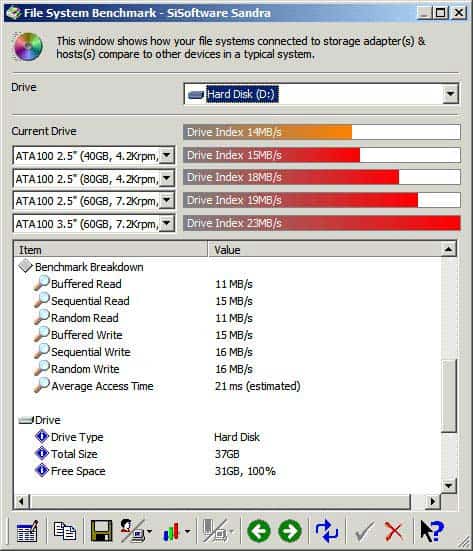 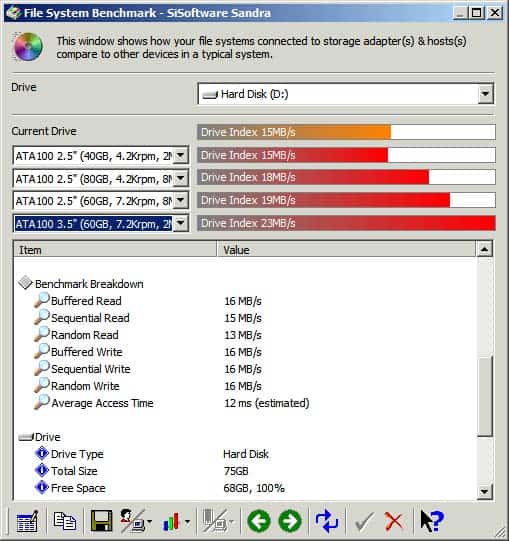 A huge 10 ms gain over the Samsung, but the Hitachi’s overall drive index is only 1MB/s better. 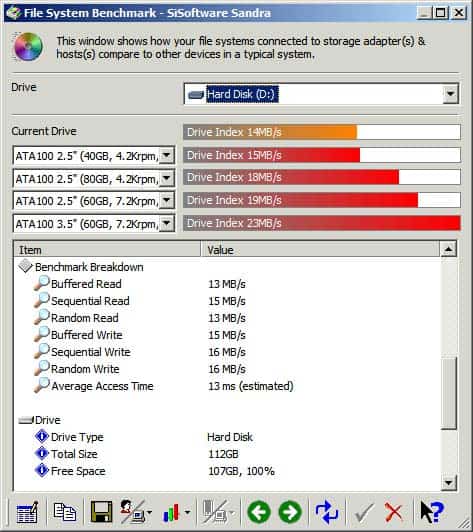 A Samsung SP80 80G 7200 rpm 3.5″ desktop drive fared the same as its smaller brethren, one Index point behind the Hitachi.
This despite Access Time on par with the Hitachi. This may not be representative of all Samsung SP80s.

The Hitachi notebook drive was used as an OS drive only for a few days. The general impression was that it is a bit faster than the Samsung notebook drive. Invariably, it is only after prolonged use that we feel confident to make broad statements about HDD performance, because its impact on different applications can vary. We will report in a future follow-up how the Hitachi fares in the context of a daily use lab system.

The Samsung drive is within a decibel of the quietest hard drive we’ve ever listened to or tested. Such a close measurement makes it difficult to give much weight to the difference; slight variances in testing conditions, procedure or samples might even flip the results. Yet unlike the 4200 rpm Fujitsu that it matches for noise, the Samsung is a faster 5400 rpm drive that, at least in practical use, gives little away in performance to bigger faster desktop drives.

The Hitachi Travelstar 5K80 also turns in a great showing, with noise lower than the quietest 3.5″ hard drive, and even better performance (at least on the SiSoftware Sandra benchmark) than our particular Samsung SP80 7200 rpm desktop drive sample. A single platter 40G model Travelstar like the Samsung notebook HDD sample might well have matched it in noise; both Samsung and Hitachi say the single platter models are a little quieter. The 40G Travelstar model is one we’ll want to look at in future, in search of the best balance of high performance and super low noise.

As with most notebook drives, vibration is greatly reduced, so if the other noise sources in your PC are not at the ~20 dBA/1m level, there’s not much to be gained from decoupling suspensions. However, those who wish to plumb the depths of silence will find the small size of notebook drives extremely handy. It is possible to rig up an elastic cord suspension even in a standard 3.5″ drive bay without worrying about drive temperature.

These drives emit so little heat that temperature is rarely a concern in most desktop / tower PC setups. And quiet though they are normally mounted with adapters in a standard 3.5″ bay, it’s a real pleasure to behold the sheer absence of any lower frequency HDD vibration induced noise when they are softly mounted.

Kind of an aside: Notebook HDDs are very sturdy when installed, but a little delicate to handle. It is best to hold them by the sides rather then by their top and bottom. Even a thumb and forefinger can apply enough pressure to damage the movable actuator heads because of the thiness of the cover. (Does that sound like experience speaking?) Another thing is that you need an adapter to use them with standard IDE cables. If in doubt about how they fit, do ask someone who knows, hopefully whoever sells it to you. Because two of the pins take in 5V, if the connector is reversed, it’s probably possible to burn the drive. We use the type of adapters show in the photo below.
Another item you might consider is a pair of side extension rails so you can mount them in 3.5″ bays normally (with standard screws), but we recommend against this. It’s so easy to damp / suspend it in a 3.5″ bay! 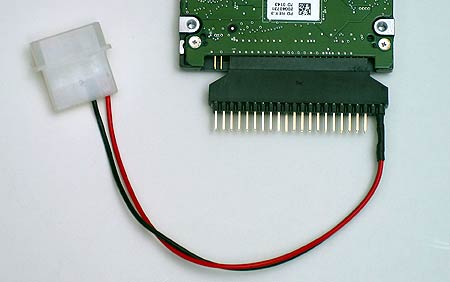 Our thanks to Hitachi Global Storage Technologies and to Frontier PC for the notebook drive samples.