PC in a Breadbox 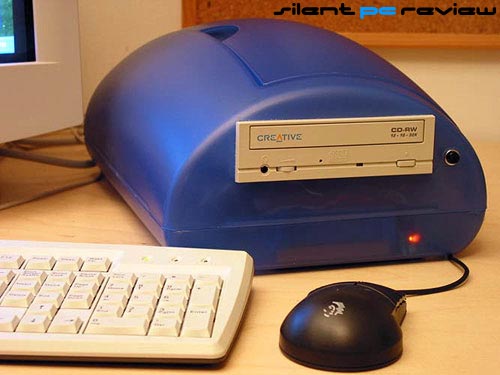 I spotted a cheap and cheerful plastic celebration of modern life in a large bin at an IKEA store. The label on the bin read: Breadbox $6.50. As I checked its dimensions with one of the paper measuring tapes IKEA offers customers who don’t bring their own, a teenager ran up, grabbed a breadbox, and yelled to his friends nearby, “Hey, lookit my new iMac! Hahahahahaha!” That was good enough for me. I bought one. The picture above shows the end result some 10 days later. It’s a complete PC in a breadbox.

The Breadbox PC began with a search for a mini-ITX case at local shops here in Vancouver, BC, Canada, where the latest in high tech is available – as long as it is smack dab in the middle of the mainstream. Mini-ITX cases apparently are not. A Mini-ITX case simply could not be found, and the Taiwanese case makers who promised samples all the way back in the spring seemed to have forgotten about their promises. The closest miss was local distributor, Elco Systems, who is said to represent Casetronics and G-Atlantic, both mini-ITX case makers. When contacted, the salesperson at Elco Systems mentioned special orders, multi-week delivery and not even an idea of price. This was the final straw. I decided it would be easier and faster to make my own.

The details of mini-ITX are known well enough by now. For the record, here’s a synopsis:

The VIA EPIA 5000 used in this project is the same one reviewed by SPCR in the spring. It measures 6.5 inches (17 cm) square and weighs barely a pound, yet has an embedded VIA CPU running at 533 MHz and a host of integrated functions based around the VIA Apollo PLE133 chipset and VIA VT8231 southbridge: integrated video, audio, ATA 66/100, ethernet controller, multi I/O, TV-OUT (S-VIDEO), SPDIF audio/phono video — composite or SPDIF. In a word, it is almost a complete PC on a board. Just add RAM, storage and power. It’s not a gaming platform or engineering/graphics workstation, but for general office work, basic multimedia, e-mail and web surfing, it’s perfectly good.

Naturally, the system had to be quiet.

*All prices in US dollars.

It’s made of a softish, somewhat translucent plastic about 3/32″ thick, and is composed of three pieces: top, bottom and a hinged curved door. Four small hooking clasps in the corners, formed of the same material as the rest of the box, hold the top and bottom together, which more or less lock the hinge pins of the door in place. I took the breadbox apart to mount the components. Three main tools were used to cut necessary openings in the breadbox: a utility knife, a jig saw, and an electric drill. 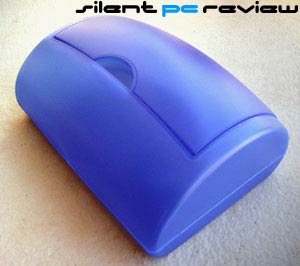 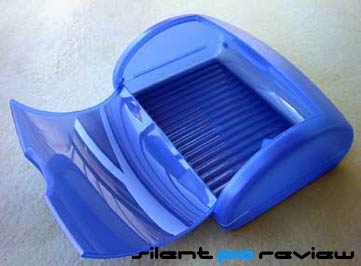 The motherboard could be mounted directly on the bottom of the box using screws and nuts, but drive bays had to be created for the hard drive and CD-RW drive. I wanted some way to suspend the drives to minimize mechanical coupling, which generally causes more noise than direct-to-air from a hard drive. Here’s what I did: a plastic parts bin, cut up as shown below. It is shown upside down. 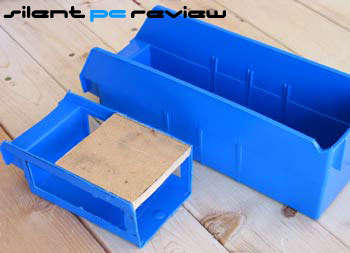 Two loops of elastic material and 2 short lengths of bamboo were used to suspend the drive, which makes no contact with the frame at all, except via the elastic, which is stretched taut to ensure security. This is shown below The bamboo pieces fit into notches cut into the plastic frame and are held in place by the tension of the elastic. A piece of 3/8″ medite board is hot glued in to provide greater structural stability. It also allows the drive assembly to be secured with screws driven in from beneath the bottom of the breadbox. 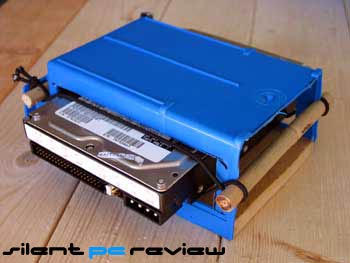 Here it is with the CD-RW mounted on top. A thin piece of damping foam goes between the CD-RW and the drive bay. It is also glued with silicon sealer / glue and two elastic loops provide further security. Also seen to the right is an LED PCB power indicator pulled from an old discarded case. It was later hot-glued (with a hot glue gun) to the inside of the front panel. When it is on, the LED is clearly visible through the translucent case. 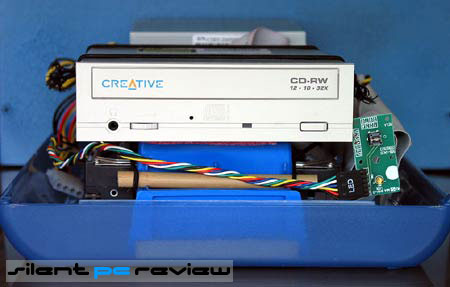 This power supply is overkill for the Breadbox PC, but it’s the smallest and quietest I had handy. With the S2FC fan circuit (4.3V default voltage to fan), all Seasonic PSUs are quiet; the fan in this sample, despite being the same 0.25A-rated Adda used in the SS300, is especially quiet. It does not speed up at all in the Breadbox PC, as total power draw is extremely low – typically 26-28W AC, which translates at 65% efficiency to under 20W DC! Even while running benchmarks (PCMark 2002, Sisoft Sandra 2002) at full tilt, the highest AC power recorded was ~37W. In a case not made of plastic, I would happily use a low power, fanless, open frame PSUs, if it was readily available. As the plastic case is more flammable than steel or aluminum, the PSU fan provides extra assurance that component temperatures will never get high enough to pose any danger. After 30 minutes of benchmark testing in
a 23° C room, the CPU heatsink barely became warm to the touch. 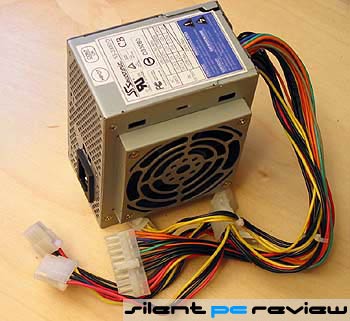 Here is the back panel with motherboard and power supply installed. Weather-stripping foam decouples the PSU from the case to ensure minimal transfer of any fan vibrations. 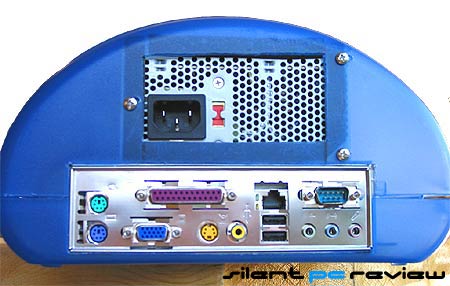 The photo below shows the subassembly with the PSU just sitting on top of the motherboard. Cables were folded and rolled to to keep them out of the way. The fan in the PSU is almost directly over the CPU / heatsink, ensuring additional cooling. 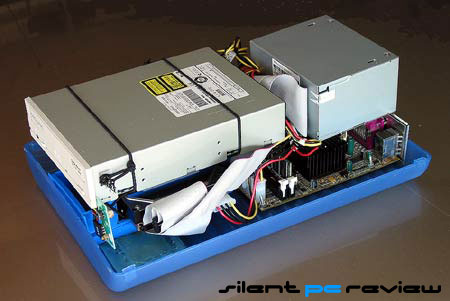 The photo below shows two rectangular holes directly beneath the drive assembly to ensure at least a small flow of air across the bottom of the hard drive. A thin, gauzy piece of cloth glued on the inside acts as a filter to catch dust; an occasional swipe with a vacuum cleaner should keep it clear. One of the three mounting screws securing the drive bay is visible in the center. Also visible are two of the five felt pad feet (one in the center) that provide about 3/16″ clearance from the desk surface. 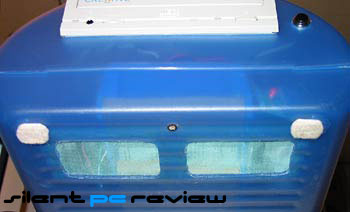 The photo below shows the completed breadbox PC with the “hood” open. Silicone sealer was used around the cutout for the CD drive to help hold it in place. The top and bottom pieces of the breadbox were also glued together with silicone, which, BTW, take a full 24 hours to set. Once set, silicone glue’s holding power is excellent, yet considerable dampening is provided by its rubbery resilience. Windows XP and all updates were installed on the system without a hitch. 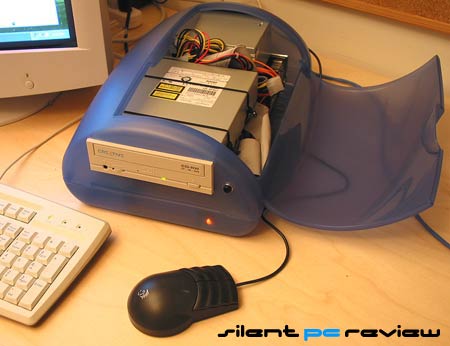 In use, the system runs quietly enough that when working with it at the table shown below (with 19″ monitor), it is almost inaudible, despite the very low noise level in the room, especially in the evening. The Seagate Barracuda IV single-platter drive and the slow-spinning fan in the Seasonic PSU make a very slight hum that is easily ignored. If there is any other noise in the quiet room, it becomes inaudible. Drive seek is slightly more audible, but still extremely quiet. Given the thinness of the plastic, the case might benefit from damping material such as an inside layer of Akasa damping mats or carpet underlay. When the system has proven to be stable for a week or longer, the plan is to seal the “hood” with silicone glue, which may provide a bit more noise reduction. 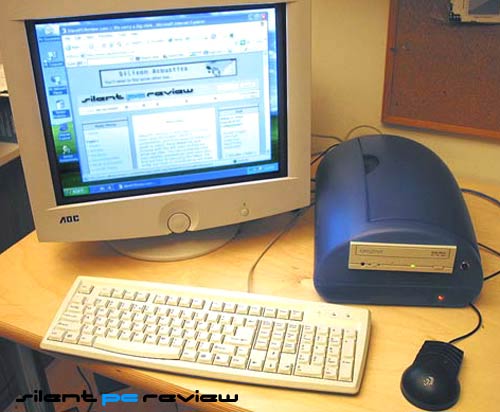 Within hours after this article was published, there was discussion with readers via email and the forums about the lack of electromagnetic interference protectionion the Breadbox PC. Looking at this issue, all the components other than the motherboard are encased in steel, are already well shielded. Corrective suggestions included: 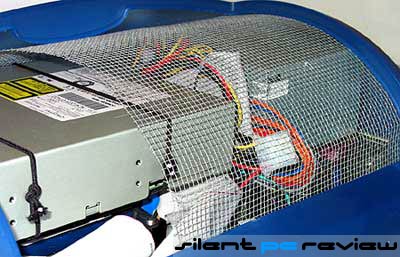 October 3/02 — A final change was the addition of a grounding wire connecting the cases of the hard drive, CD drive and PSU to the wire mesh to increase its effectiveness against EMI.