Our headline refers to the unusual shape and design of the V1 cooler. The V1 is Thermaltake’s only vertical tower cooler, made entirely of copper and sporting a host of interesting features. How does it fare in the cool and quiet sweepstakes?

Thermaltake has a reputation in the silent PC community as a sort of pariah. While the company puts out competent heatsinks, it pays little
or no attention to the fans included with them. Thermaltake ad copy routinely spouts
claims of “extreme silence” and “16 dBA” which usually
go unfulfilled. The Thermaltake Big Typhoon VX and MaxOrb coolers are typical examples. However, the V1 has
many bold design elements few manufacturers would dare to implement in a single
new product. It is our hope that the fan has been rethought as well.

Thermaltake’s product line is stacked with top-down coolers; the V1 is their
only high-profile vertical CPU heatsink.
Its construction is innovative, probably the most
creative cooling design from Thermaltake in years. Typical tower heatsinks have heatpipes
running vertically and fins horizontally, but the V1 turns this convention on
its head. Its fins are aligned vertically (more or less), spread out like a
peacock’s tail, while the heatpipes in the airflow path are horizontal with
a slight curve. All of this is spread out into two sections between the fan,
placed smack dab in the middle.

The V1 is an unique looking product. Next to the Scythe Ninja Copper, a typical vertical heatpipe cooler,
the only resemblance is the color.

The Ninja is taller, and wider in one dimension; the V1 is wider in the other dimension. However, the Ninja doesn’t have a fan incorporated into its design
— that would add an extra 25mm.

The V1 bears a resemblance to Zalman’s original flower heatsinks, as the photo below shows.
It is comprised of two sets of heatpipes curving upward into fins arrayed
like paper fans. The frameless fan is positioned between them. 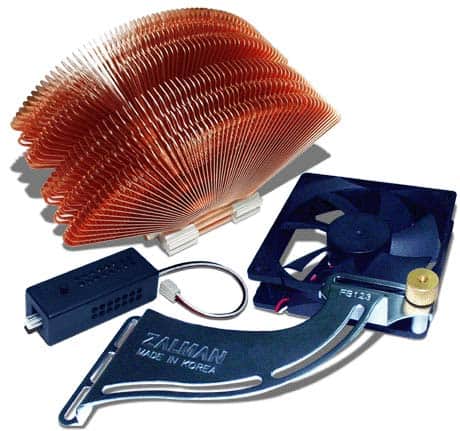 At 147mm, the V1 is quite tall. The fins vary in size, longer in the middle
and shorter at the ends, just enough to cover the fan’s radius. The distance between the fins
is smaller at the bottom than at the top. The four heatpipes resemble hooks
(or scythes, ironically), but a large portion falls outside of the fan’s reach.
More blocky tower heatsinks usually have less than an inch of heatpipe material without
direct airflow, but this aspect probably has little effect on cooling performance as it’s the fins which transfer the bulk of the heat into the air. The fan’s motor is carefully positioned between the heatpipes
so any dead-spot of airflow in the center will have a minimal impact on performance.

The V1 is a fairly narrow heatsink considering it sports a fan of 110mm diameter. There
is also a lot of separation between the fan and the fins on one side due
to the mounting arm that holds the fan in place.

The fan mounting arm is secured to the bottom plate via several screws. It rises up
and forms a Y-shaped frame. The fan is attached to the arm via three screws.

The fan is made
of hard, translucent plastic to scatter the light emitted from the blue LEDs.
Many heatsinks are now equipped with frivolous decorative lighting. 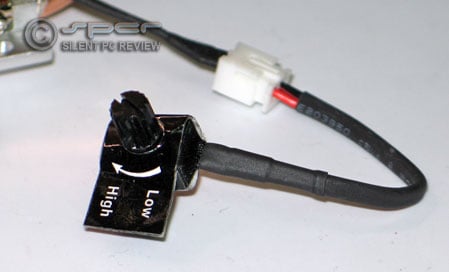 The small “VRFan Speed Control” plugs into an inline socket.

The base of a heatsink and the method by which
it is installed are as important to overall performance as construction
material and/or form. In these regards, Thermaltake simply follows convention.

The base is smoothly polished and flat, although there are some very fine circular ridges
visible close-up that we weren’t able to capture it on camera.

The base and heatpipe assembly are attached to the mounting plate with four
tiny screws, making it simple to remove. The heatpipes are permanently joined to the base, presumably with solder. There was no thermal interface material between the top aluminum cover and the heatpipes or base. Spreading some TIM in this interface might improve cooling a tiny bit by spreading out the heat a bit more efficiently, perhaps by a degree or two. It was left as-is for the test.

The LGA775 push-pins are split into two brackets and are secured with screws.
For AM2/K8 installations, a simple metal tension clip is provided.

The push-pins engaged the heatsink against the CPU with moderate tension,
similar to the stock Intel heatsinks. The base could be
rotated a few degrees, but overall it was a pretty snug. Using the push-pins was simple because there was direct, unhindered access to them from above. We ususually bemoan the use of the Intel-designed push-pins, but in this heatsink, it was not an unwise choice. Only the cantilever effect of the 637g mass, a lot of which is positioned at the top (or end) of the heatsink, would give us any cause for pause.

The heatsink did not have any compatibility problems with our
test board. The angle of the heatpipes is high enough to clear most northbridge
heatsinks. The V1 did overhang the edge of our motherboard by approximately
2.3 cm (or almost a full inch) at its furthest point. This could run foul of the power supply in many cases.

Load testing was accomplished using CPUBurn to stress
the processor, and the graph function in SpeedFan was used to make sure that
the load temperature was stable for at least ten minutes. The stock fan was
tested at various voltages to represent a good cross-section of its airflow
and noise performance.

The ambient conditions during testing were 19 dBA and 21°C.

The fan included with the V1 is similar to those used previously by Thermaltake,
with a low starting voltage of 3.5V and spinning between 600 and 2000 RPM with noise
levels between 21 and 42 dBA. It’s a loud fan with complex overtones.
Being hard-mounted and secured on only one side only exacerbates the noise
level.

Fan @ 12V: With a 42 dBA@1 SPL, it was unbearable. Along with
the aggressive turbulence accompanying the high amount of airflow, there was
also a slight rattle, possibly caused by vibration. On the bright side, performance
was top-notch at only 12°C over ambient.

Fan @ 9V: The sound level was more managable but well beyond our comfort
level. The acoustic profile mainly comprised of turbulence and some mechanical/electrical
buzzing close up. The CPU temperature increased by only 3°C.

Fan @ 7V: It was still too loud for our liking, but the overall sound was smooth
though the buzzing was still evident, especially when one foot away or closer.
Cooling was only one degree off compared to at 9V. This is about the minimum setting of the built-in speed control.

Fan @ 5V: At 24 dBA, the SPL reached an acceptable level. Much of the noise
emenating from the fan was now from the motor. It was quite tonal, and the buzzing
present at higher voltages transformed into a hum and a low-pitched ticking. The CPU temperature
was a respectable 18°C over ambient.

Fan @ 3.5V: From up close, the motor exhibited a very harsh, grinding ticking
sound. At 1m it was barely audible. Little cooling was sacrificed over the 5V speed. Note that that is well below the minimum level provided by the built-in speed control.

The V1 performed very well overall, but not good enough to be considered
elite. It bests the Thermalatek MaxOrb by a few degrees and performs similarily
to the Gigabyte G-Power 2 Pro and Zalman CNPS9700.

With the fan turned all the way down to its starting voltage, the V1 is comparable
in performance to the Scythe Minja and Xigmatek SD964. Both of these heatsinks
are significantly smaller, a fraction of the V1’s $55 price tag, and
come with much smoother sounding fans. Also, to get the V1 down to 21
dBA, a capable fan controller is required. The included VRFan Speed Control only goes
down to approximately 7V.

These recordings were made with a high resolution, studio quality, digital recording system, then converted to LAME 128kbps encoded MP3s. We’ve listened long and hard to ensure there is no audible degradation from the original WAV files. It represents a quick snapshot of what we heard during the review. The recordings contain ~10 seconds of the heatsink fan sound at each speed tested, with 5~7 seconds of ambient between each level.

The recording begins with the ambient noise of the test room. Please set your playback volume so that the ambient noise is almost inaudible, then don’t adjust the volume control again. For best results, save the sound file to your own PC, then listen.

The recordings are intended to give you an idea of how the product sounds in actual use — one meter is a reasonable typical distance between a computer or computer component and your ear. The recordings contains stretches of ambient noise that you can use to judge the relative loudness. For best results, set your volume control so that the ambient noise is just barely audible. Be aware that very quiet noises may not be audible — if we couldn’t hear it from one meter, chances are we couldn’t record it either!

More details about how we make audio recordings can be found in our article: Audio Recording Methods Revised.

Thermaltake designers threw everything but the kitchen sink into the V1: Vertical
radial fins, hooked heatpipes, all-copper construction and a fan sandwiched
in the middle of it all. For all their ingenuity, it only performs slightly
better than Thermaltake’s previous offerings. It also retains the biggest problem
that plagued it’s older kin: A loud, hard-mounted fan. The V1 demonstrated excellent
performance with the fan blowing fast and hard, but it was also fairly good with
the fan slowed for more acceptable noise. The quality of the fan noise is not great and it’s made worse by the way the fan is secured.

Our opinion is that Thermaltake considers fan noise and mounting to be an unimportant detail.
When compared to the attention some manufacturers lavish on this matter, Thermaltake’s approach seems
unenlightened: Thermalright separates the fan from their
heatsinks using rubber strips; Noctua, Arctic Cooling and Xigmatek use fan isolators. Thermaltake?
Screws on a metal bracket prone to vibration.

The V1 is Thermaltake’s best performing CPU cooler we’ve reviewed to date. At a hefty $55,
however, there are many better alternatives, both smaller and cheaper. We applaud Thermaltake
for having the guts to put out such an atypical cooler, but the fundamentals need more work. The most successful heatsinks
have a soft-mounted fan with excellent acoustics, a relatively uniform
design, and a solid (better than stock) mounting system. Until Thermaltake gets all
three right, its products will continue to be second-class citizens in the kingdom of
silent computing.

Our thanks to Thermaltake
for the V1 sample.