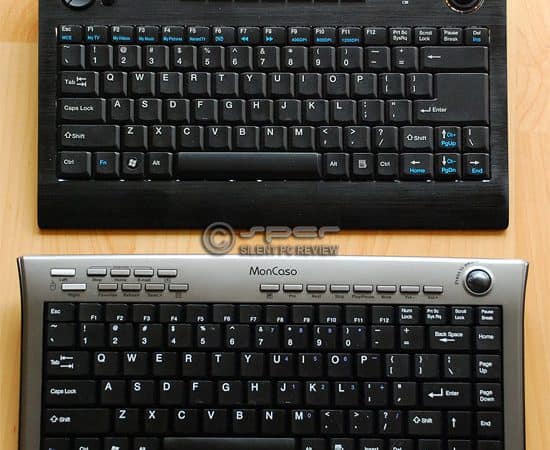 QWERTY still rules, even with handheld devices, and as long as there’s a computer lurking, a keyboard seems unavoidable. Couch potatoes (and HTPC users) rejoice: Here are two wireless keyboards with integrated mice, designed for relaxed in-lap use.

Since the emergence
of the personal computer, the classic typewriter keyboard has become utterly
ubiquitous. The QWERTY
keyboard remains the primary interface between human beings and computing devices,
from the micro-keyboards on handheld devices like the iPhone or Blackberry,
to the big 106-key discrete maxi-keyboards for desktop PCs. Naturally, there
have been many evolutionary changes to adapt the alphanumeric keyboard for different
sizes and types of devices. One increasingly important variant is for the couch-potato
HTPC user, whose large flat-screen displays movies and TV programs as well as
games and more traditional computer applications. The wireless keyboard with
integrated mouse was made expressly for this user.

Highly sophisticated remotes such as the very pricey Logitech
Harmony models attempt a single, one-hand control solution, as do the Windows
Media Center Edition remotes. But if you’re running a PC, sooner or later, access
to a keyboard is mandatory. The
wireless keyboard with integrated mouse functions is a counterpoint to the sophisticated
hand-held remote: It is a singular computer control device that requires two
hands and a lap, but nothing else.

The wireless keyboards under review are from very different companies. Enermax
is known primarily as a maker of power supplies, while Moneual
is a high end HTPC case/system maker. The former is obviously diversifying its
product range, while the latter is staying well within its realm.

The two keyboards have many more similarities than differences. Their functional
essence center around the mouse buttons on the left side, and the rollerball
on the right side, for control by your thumbs. The photos below captures it.

The Enermax keyboard goes a step further than the Moneual by including a scroll
wheel/button, a little bit further in from the edge.

A look at the underside shows the contouring which enables the two-handed grip.
Both keyboards have broad raised ridges along the sides which allow the fingers
to grip beneath. The moneual’s more rounded contours are a bit more comfortable.

The underside is also where both keyboards have an extra control or two: The
Enermax has an on/off power switch and a reset button. The Moneual has a single
connect button. The reset and connect buttons accomplish the same task: Establish
communication via their respective USB radio dongles. Although the two keyboards
and their USB radio dongles operate at the same frequency, they are not interchangeable;
each has a unique ID that communicates only with its own radio dongle.

About the only way that a keyboard can be assessed effectively is by using
it, not for an hour or a day, but over a long period of use. This is precisely
the approach taken. Both keyboard were plugged into the same home theater PC
(running Windows 7 Ultimate) and used alternately for many weeks. No conflict
was encountered with both USB radios plugged in and enabled; the keyboards could
even be used almost simultaneously. The long assessment period brought out significant
differences between the two keyboards, some of which would not have been discernible
in a shorter period of use.

The ~11.5" width of the actual keyboard of the Enermax is about the
same width as a typical desktop keyboard (minus the arrow keys and number
keypad on the right). It’s slightly wider on the MonCaso, about 11.75".
This dimension varies as much as an inch, being only just over 11" on
some and nearly 12" on other keyboards in the SPCR lab. On the Enermax,
there are not many deviations from standard layout on the main keys. Only
on the right side is there some variance, mostly with keys that aren’t that
often used or repeated on the left side. This is to accommodate the arrow
keys.

The FN key at the the left bottom accesses the blue colored tertiary functions
of the arrow keys and the Windows MCE function on the ESC to F11 keys on the
top row. For ease of use, the MCE keys are not great. The top row of 7 hotkeys
are easier to use, but they’re a bit of an odd mix. The DEL key is at the
top right, reasonably close to where you normally expect it to be. For extended
typing, this is a better keyboard than the Moneual, especially with the extended
palm rest below the keys, which the Moneual lacks. The scroll wheel/button
is a win if you’re used to using a center scroll wheel mouse, but it’s a bit
of a reach for the thumb; just a half cm or so to the left and the entire
left mouse buttons would have been more comfortable to use.

The feel of the keys as you type is also quite good, with enough spring or
back pressure to make a fast typist comfortable. But long typing is not what
this keyboard will be used for; the brief email is likely the longest bit
of typing that the typical user will do on a HTPC.

The Moneual Moncaso keyboard has many more non-standard key placements. Some
of the worst:

There are many more hotkeys at the top. Eight keys on the right for media/play
controls, and a group of 8 more keys on the left mostly for web browsing convenence.
The logical grouping makes them fairly easy to use.

The keys feel a bit mushier than on the Enermax, requiring less pressure.
While it might not be quite as nice to type a novel on, the practical impact
of this seems minimal.

Overall, the main functionality for typing is much better on the Enermax,
and the relatively standard layout for the main keys makes it easier to use.
The scroll wheel is really nice to have, as well. But hotkeys are better implemented
on the Moncaso.

Both keyboards were easy to start using. To activate, the USB radio dongle
is plugged into the PC pressed, its button pressed, then the reset/connect
button on the keyboard pressed. Another press on the scroll wheel/button fires
up the Enermax; a press/click on the rollerball awakens the MonCaso. Both
keyboards have power management features that essentially puts them to sleep
when not used for more than ~20 seconds. Normally, a tap on any button awakens
the keyboard, although the scroll wheel on the Enermax or the rollerball on
the MonCaso are more reliable.

After long periods of inactivity, the Enermax occasionally lost connection,
and the keyboard’s red low battery light would flash. Most often, a reset
procedure would fix the problem, but sometimes, the power switch had to be
turned off and back on before it would work again. The manual for the Enermax
suggests turning the power off when not being used, but the power switch is
so tiny and hard to use, this was rarely done. Still, after a month’s use,
the batteries seemed perfectly fine.

The MonCaso keyboard never failed to awaken after long periods of inactivity.
A press of the rollerball always got it going. The batteries last at least
two months with the keyboard in active use perhaps an hour or two a day.

On both keyboards, the left/right mouse button keys and the rollerball worked
about the same. It was quite easy to adapt to this mode of use, from a normal
optical mouse. The laser roller ball of the Enermax did not provide any significant
edge over the optical ball of the MonCaso.

Typical usage on the HTPC consisted of a period of file and web browsing,
some organization of media content on the main storage drive, as well as on
the NAS box. Such periods were usually fairly short, perhaps 10~20 minutes.
An occasional forum post or short email was also written. The 55" TV
was positioned about 7′ away from the main easy chair, and the keyboard set
on a small table next to it. When a video program was watched, once the volume
was set, it was normal for the keyboard to be set down, and to reach over
occasionally only to access the pause or volume controls. Most of the time,
MCE was not engaged; the greater flexibility of working in Windows 7 was preferred.

The FN + key two-step access made the MCE hotkeys on the Enermax a bit awkward;
it is a 2-hand operation. Removing either hand from the mouse buttons or the
rollerball slows the user interaction; the hands generally have to go back
to the top left and right positions in normal use.

The useful range of the Enermax keyboard was at least 30 feet, even with
an internal partition wall between it and the USB radio receiver. The MonCaso’s
range seemed slightly shorter, but both provided more than adequate useful
range. It’s hard to imagine anyone trying to use either of these keyboards
from much more than 20′ away; the display screen would have to be enormous.

While the Enermax’s aluminum construction gave it a more solid feel, its
weight was a bit bothersome, as were the sharper edges of the frame. The MonCaso
much lighter weight made it more comfortable on one’s lap, as did its rounder
contours; it’s a positive implementation of the cheap and cheerful approach.

These all-in-one wireless keyboards from Enermax and Moneual are far better
suited for use with a HTPC and a large flat-panel TV than the typical keyboard
plus mouse wireless combo. Having used MCE remote controls from time to time
as well, our preference is for the much greater flexibility of the all-in-one
keyboard, because when you’re dealing with a computer, there’s still no avoiding
the occasional need to use a keyboard. A less computer-savvy user might prefer
a MCE remote control, but s/he will still need to have a keyboard accessible
from time to time.

The Enermax keys have a near-standard layout, which is very good as little
adaptation is required of the user. But the extended palm rest is not useful
when the keyboard is in your lap as you’re sitting in a relaxed position on
a couch or easy chair. It’s really only useful when the user is in a more upright
chair at a desk. This unnecessary feature makes the Enermax bigger and more
unwieldy than it has to be.

While both keyboards offer good usability, neither is perfect. The layout of
the main keys on the MonCaso is poor, while the hotkeys on the Enermax aren’t
very useful. The scroll wheel on the Enermax is great to have, but the MonCaso
offers better comfort with its lighter weight and more rounded contours. A balanced
mix and match of the best features from both keyboards would be ideal.

This is definitely a subjective judgment, and not every user will agree: Either
keyboard will probably work fine for most HTPC users, but we’re slightly biased
for the greater comfort and reliable connectivity of the MonCaso — while
still yearning for the better key layout and scroll wheel of the Enermax. Finally,
the much lower price of the MonCaso might be a compelling buying factor. YMMV.